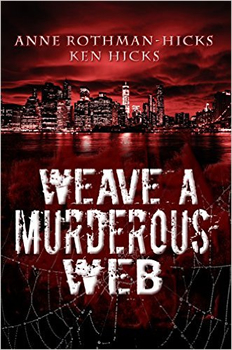 By Anne Rothman-Hicks and Ken Hicks

Anne Rothman-Hicks and Ken Hicks have lived together in New York City since August of 1973, about a month before Ken began law school at Columbia University and Anne started working as an editor at a publishing house. Anne actually was born in New York City and lived there until (as she puts it) she was exiled with her family to the suburbs of Westchester for her teenage years.  She came back as soon as she could.

During their 43 years as New Yorkers, Anne and Ken have walked the city from top to bottom and explored its neighborhoods, parks, museums, and bridges on an almost daily basis.  So, guided by the adage “Write what you know,” they have featured New York City in each of their several, diverse books, from thrillers to mysteries to mainstream to ‘tween fantasies.

In their mainstream novel, Kate and the Kid, self-involved twenty-something Kate is duped into babysitting an emotionally needy six-year-old child as a favor for a friend in her building: a favor which is supposed to occupy only one short evening but turns into an overnight adventure and then a lot more. Initially, Kate thinks that taking care of a young kid is the last thing she needs, but gradually she realizes that a connection with the Kid is exactly what she needs to learn about truly generous, unconditional love.  Location-wise, the story travels through Central Park and the playgrounds of the Upper East Side, and all across the city. New York is an integral part of the narrative; in fact, as one reader put it:

“It’s almost as though the city itself is another character in the book. The writer seems to know where all the best parks are, and the best playgrounds, and exactly how to get there. New York neighborhoods come alive is this novel so if you live in New York City or want to live in New York City or have even just thought about New York City, you’ll enjoy the way Kate And The Kid makes it all seem familiar.”  Stanford Gal, Amazon Review, Feb. 8, 2015

Praise Her, Praise Diana is a thriller that the writers also set in New York City. In this novel, a mysterious purveyor of vigilante justice–a woman code-named Diana–starts to kill and castrate men in revenge for a rape that had occurred years before.  As Diana evolves into a force that cannot be ignored, other women begin to support and even imitate her actions, and a wave of gender-based violence and tension sweeps through New York City. The action takes place all over the city, including the Upper West and East Sides, Chelsea, Central Park, TriBeCa and the courthouses on Centre Street, where a grand jury weighs the fate of one of the characters while a crowd grows outside, threatening to become a mob. At one point the main character, Jane Larson, considers leaving the city to live with her new lover in the peaceful countryside of exurban Connecticut. However, the city itself seems to call to her and draws her back.

The setting of New York again plays an important role in their ‘tween fantasy novel Things Are Not What They Seem. This book begins when brother and sister duo Jenny and James discover a talking pigeon in Central Park.  They later learn that he is in fact an Englishman (named Arthur Whitehair) who was turned into a pigeon some 130 years ago, when he misread a spell that was supposed to grant him everlasting youth. Unfortunately, an evil colleague named Malman was turned into a hawk by that same misstep and now wants to kill Whitehair! Malman and his henchman, Drescher, chase Jenny and James all over Central Park and the Upper East Side while they try to protect Whitehair.  Once again the city comes alive:

“The City of New York is almost a character to itself in this book, and the authors write with obvious insider knowledge of natives. You’ll feel as if you’re in Central Park with Jennifer or chasing Arthur along the city streets.” Cat Michaels, Amazon Review, Feb. 16, 2015.

Finally, their most recent mystery, WEAVE A MURDEROUS WEB, involves a hotshot Wall Street lawyer who is a sassy, cynical New Yorker through and through. To help out a friend, she gets involved in a seamy matrimonial case that quickly pulls her into a vortex of murder, drugs, and dangerous games of deception. The plot unfolds in many different New York neighborhoods: the action occurs in and around the state Supreme Court building at 60 Centre Street, the posh law firms of Park Avenue, the seedy back alleys of TriBeCa, the tenement buildings of the less upscale sections of the Upper East Side, and even the deserted industrial streets and warehouses of Long Island City.

In 2015, over 56 million people came to New York for a visit. Why not take the trip yourself without leaving the comfort of your favorite reading spot? Whether you have never been to New York, you have been there and want to go again, or you live in that great city, you will definitely enjoy the NYC-infused writing of Anne Rothman-Hicks and Kenneth Hicks. 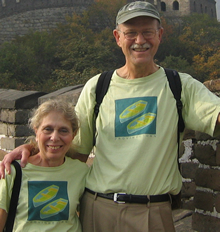 Anne Rothman-Hicks and Kenneth Hicks first started writing books together while Anne was a student at Bryn Mawr College and Ken was a student at Haverford. In 1984, they published Theft of the Shroud, a novel, through Banbury books, distributed by Putnam. That same year they also published a series of 10 books based on the most popular boy’s and girl’s names, and a book about the constellations for children. Most recently, Ken and Anne are the authors of Weave A Murderous Web, (mystery) Melange Books LLC, 2016; Praise Her, Praise Diana, (Adult thriller) Melange Books LLC, 2014; Kate and the Kid, (Adult mainstream) Wings ePress 2013; and Things Are Not What They Seem (T’ween fantasy) MuseItUp Publishing 2014. Anne and Ken have also published two small-format photography books, which are available on the Apple iBookstore – Hearts (no flowers) Signs of Love in the Gritty City and Picture Stones.