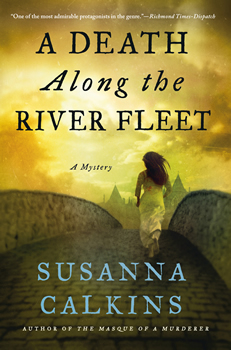 A DEATH ALONG THE RIVER FLEET is the fourth in the historical mystery series set in 17th century London by Susanna Calkins. The amateur sleuth is Lucy Campion, a chambermaid in the first book. In this fourth installment she works for a publisher, setting type, hawking tracts out on the street, and sometimes, penning a tract of her own.

And she solves murders.

Calkins, a former pirate (living history specialist), was inspired by a treasure trove of 17th century murder ballads, the penny press, and the kind of tracts that Lucy Campion sells. An oft-repeated tale in these sources featured a young woman, strangled or stabbed, found with a note—signed by her lover—tucked in her pocket. Her lover was rounded up, arrested, tried, and usually hanged for the crime. Calkins wondered, “Why would a young woman go to such a tryst, anyway? Why did the murderer sign the note? Why not remove the note after his victim was dead?”

Those questions are answered in the first novel in the series, A Murder at Rosamund’s Gate, set in London in 1665, right after London was hit by the Great Plague.

The second novel, From the Charred Remains, is set in 1666, right after the Great Fire. Early forensic science is used to find the killer.

The third, The Masque of a Murderer, is set in 1667. A man dying after what appears to be an accident reveals that he was murdered, and Lucy has to solve the crime. This novel was nominated for the Lefty, the Agatha, and the Mary Higgins Clark award.

For her doctorate in British history, Calkins researched the lives of common people. She tried to imagine what her own life would have been like three hundred years ago and concluded that she would have been a servant. She might have known how to read, so she could read the Bible. “All over the world there are people who can’t read, but find a way to learn,” says Calkins. “We’d like to believe that we would be those people too. Lucy tries to be a bit better than her station.”

But Lucy is special. “Usually [in that time period] someone sees a dead body, they run in the other direction. But Lucy needs to save the life of a loved one accused of murder. She won’t just say ‘It’s Divine Providence,’ and move on.”

The Great Plague and the Great Fire altered society in extreme ways. So many people had died, and London still hadn’t recovered. There were opportunities for people to re-invent themselves. And that’s what Lucy does, aided by her friend, Dr. Larimer, a regular supporting character who appears throughout the series, her brother Will, and the two men competing for her affections: Adam, the magistrate’s son, and Constable Duncan.

Calkins is interested in how Lucy develops over time: “Lucy was much more superstitious in the first book. She’s developing her mindset and comes to question her beliefs. We assume women didn’t question things [back then] but of course they did.” She envisions Lucy becoming a bookseller, running her own business, while still solving crimes.

A DEATH ON THE RIVER FLEET started with a single, Gothic image, the image on the cover: a disheveled woman on a bridge, barefoot, wearing only a simple shift, which is covered in blood not her own. She has no memory of who she is or what has happened to her. Lucy ends up taking a leave from her printmaking job to care for the woman until her family can be found. What follows is a novel of psychological suspense, as Lucy pieces together clues from the evidence, from the woman’s ramblings and mutterings, and from Dr. Larimer, Constable Duncan’s, and her own investigations.

Though Calkins is not done with Lucy, she is also thinking about writing other stories set in different eras, such as 1930s Chicago. She writes with only the briefest of outlines: three sentences scratched out on a piece of paper. “No one can tell the pantsers from the plotters when the book is done.”

Calkins develops her stories as she does her research. For DEATH ON THE RIVER FLEET she created a six-foot-long map of London with the river prominently marked and hung it on her wall. The research leads to things she can use as clues in the books, like the “scold’s bridle,” (an iron mask with a tongue depressor, to punish women for speaking out of turn), used in The Masque of a Murderer.

Women are still punished for making noise. Calkins tells of a scary research moment. She was ensconced in a corner of an empty library, when “a very tall and skinny older woman with a severe bun, dressed all in black, stared at me, tapping her foot. ‘You are supposed to be quiet in the library,’ she hissed.  She gestured to my computer. ‘Your keys. They’re too loud. You need to stop with that noise.’ Her tone was so contemptuous, and so icy that it really did give me chills.

“But it made me angry, too. ‘I’m just doing work here, quietly, and now you’re interrupting me.’

She gave me another harsh stare. I stood my ground and stared back, but she really was very imposing. Then she turned and walked off in a huff.

“Then the library guard came and kicked me out of the library. The Wicked Witch was standing behind him, with this smug victorious expression on her face. She whispered, ‘You cannot cross me. You can never cross me!’ It still gives me an unpleasant chill.” 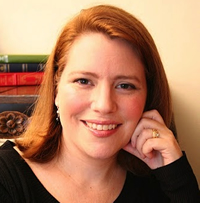 Susanna Calkins writes the Lucy Campion mysteries, set in 17th century England. Her books have been nominated for several awards; her third—The Masque of a Murderer (Minotaur Books, 2015)—was shortlisted for the Mary Higgins Clark Award, the Agatha for Best Historical Mystery, and the Bruce Alexander Historical Mystery Award. Her fourth book—A Death Along the River Fleet—was released April 12, 2016. Born and raised in Philadelphia, she lives outside Chicago now with her husband and two sons.