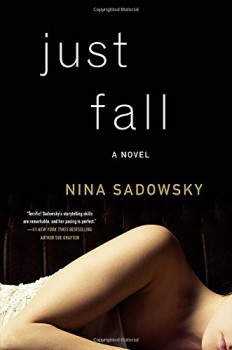 JUST FALL is a contemporary thriller that has everything—hot sex, hot sands, a high body count, and a seductive new husband who isn’t as straightforward and solid as he seems. This is the debut of Nina R. Sadowsky.

Although “debut novelist” may conjure a particular picture in your mind, set that aside. Sadowsky has quite a resume in her former career. She segued from practicing entertainment law into script writing and producing in Hollywood, along the way working and making friends with many of the biggest names in the business. I was especially pleased, to interview Sadowsky for The Big Thrill about her exciting background, and how that led to JUST FALL.

Your life has been a series of successes. With such a full dance card, what inspired you to turn your hand to writing a sexy thriller?

After a frustrating run with some film and television projects, I felt my love of writing ebb. I had always wanted to write a novel, and decided to start one as a private project, something I was doing just for my own purpose—to rekindle my love of the process.  So I decided to have fun with a genre I’d always loved as a reader.  I’ve been a mystery/thriller fan since I devoured my first Agatha Christie. I decided I wanted to write about real emotions, parse the perils and pleasures of intimacy, but as kind of a pulp fiction, a lurid fever dream.  My goal was to have fun with it and I did.

Did your work in Hollywood influence your choice of genre, plot line, or location when you set about writing your thriller?

Some of my favorite filmmakers are Alfred Hitchcock, Stanley Kubrick and Martin Scorcese —all masters of controlled tension in stories that seem simultaneously larger than life and completely relatable. They certainly influenced me in my quest to make Ellie, the protagonist of the thriller, a kind of “every woman.” Not a femme fatale, not a good-girl-gone-bad, but a woman with whom most people could identify, even as she committed terrible acts. I’ve always also loved the noir genre, with its stark examination of moral ambiguity. I believe these kinds of stories are how we process our fears about a violent, often senseless world.

As far as the locations, years of working in a visual medium has taught me how much information can be infused into every frame of film. I can’t help but think visually when I think about story. So in choosing locations and how to describe them, I always try to look at a place from many different angles. How does a location speak to the themes at play? Does the emotion of the scene demand a bleak location? A colorful one? What can the reader learn about the characters by their reactions to their environment?

I enjoyed the structure of your book. You alternate between sections that are labeled THEN and NOW. Can you explain why you settled on that way to tell your story?

In the first NOW chapter, we meet Ellie, a young woman in a lush, island setting, a murdered man in her hotel room bed. I hoped this would be an intriguing way to start a novel, but it’s a pretty rough introduction to a woman for whom I want readers to root, especially since the next thing Ellie does is mutilate the corpse. I decided to take the reader back in time to meet Ellie on the day of her wedding to Rob, as weddings are so often the end game of our pop culture’s reflection of romance. The wedding scene established her as an ordinary, relatable girl on the best day of her life—until it all goes horribly wrong and she learns Rob is hiding a deadly secret. It is in the next THEN chapter that we then see her mutilate the corpse. I hoped this juxtaposition would propel a reader to want to know how and why Ellie ended up in this treacherous situation, and root for her to get out of it.

The NOW chapters are linear in time, and shift to reflect the perspectives of four different characters. The THEN chapters detail Ellie and Rob’s courtship and respective pasts, and are arranged non-linearly in a way that I felt would best illuminate their characters.

What feels different to you in writing for the printed page rather than for a film?

Certain things are of course the same, good story telling is good story telling.  In writing a novel, however, I found a freedom that’s not found in most TV and film writing, where the structures are pretty rigidly codified. I also loved being able to write a character’s thoughts, which one can’t do as easily in a visual medium. In addition, a script is a road map for a collaborative effort that requires the participation of hundreds of people, it is not a finished product in itself.  No matter how hard one labors to “perfect” a script, the ultimate film or television show reflects the input of producers, directors, actors and countless other creative personnel. A novel exists as an end in and unto itself.

The ending of JUST FALL seems to beg for a sequel. Is one in the works, or in the planning stage?

Thank you!  I would like to go back to the JUST FALL characters of Rob and Ellie at some point, and have some ideas about how to do so.  A number of early readers have also asked for more of Lucien Broussard, the police detective, and I am considering giving him his own book down the road.

Blurbs for JUST FALL are simply killer. Diane Keaton and Sue Grafton—for heaven’s sake! How did your Hollywood connections help you advance your publishing career?

Sue Grafton I didn’t know, she was asked to read an advance copy by my agent. Needless to say, I was thrilled by her response. Diane Keaton is an old friend. We made a movie together years ago, but have stayed in touch; she is one of the actors I most respect, as well as a wonderful person. The blurbs from both of them, as well as those from other early readers in my community of friends in the film and TV business were a big boost to early enthusiasm about the novel.

I hope so!  Discussions are underway in this regard and I hope to be able to announce something soon. 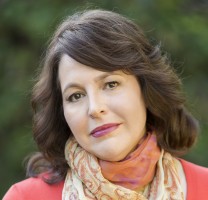 A New York City native, Nina R. Sadowsky is an entertainment lawyer (in recovery) who has worked as a film and television producer and writer for most of her career. JUST FALL is her first novel. She has written numerous original screenplays and adaptations and done rewrites for such companies as The Walt Disney Company, Working Title Films, and Lifetime Television. Sadowsky also wrote, directed and produced the short film, “The First Year’s A Bitch,” a darkly funny take on the first year of marriage, starring Christine Taylor and John Livingston, which was featured in numerous film festivals, and which won the award for best editing at the New York Short Film Festival. She served as President of Production for Signpost Films, a film financier and foreign distributor, where she worked on such projects as the Academy Award nominated “The House of Sand and Fog,” starring Jennifer Connelly and Ben Kingsley.

Prior to joining Signpost, she served as President of Meg Ryan’s Prufrock Pictures for over five years. During her tenure, Prufrock landed first look feature deals with Fox 2000 and Castle Rock Entertainment and an overall long-form television deal with Polygram/Universal Television. Sadowsky served as executive producer for the hit film “The Wedding Planner,” starring Jennifer Lopez and Matthew McConaughey for Intermedia and Sony, produced “Desert Saints,” an independent film starring Kiefer Sutherland which premiered on Cinemax, produced the supernatural thriller, “Lost Souls,” which marked the directorial debut of Academy Award winning cinematographer Janusz Kaminsky for New Line Cinema, produced the telefilm “Northern Lights,” starring Diane Keaton for The Disney Channel, and served as executive producer for the animated half hour comedy pilot, “Quints” for UPN. She also produced “Jumpin’ at the Boneyard” starring Tim Roth, Jeffrey Wright and Samuel L. Jackson for executive producer Lawrence Kasdan and Twentieth Century Fox, which was featured in the Sundance, Montreal and Torino film festivals.

She is also currently serving as adjunct faculty at USC’s School of Cinematic Arts program, teaching both writing and producing. Her students have been the recipients of many awards and accolades including best scripted series at the College Television Awards and inclusion in the Cannes Film Festival Shorts Corner. Sadowsky is also currently serving as a mentor for the Humanitas Prize’s New Voices Program. Sadowsky graduated cum laude from Connecticut College with a major in dance and a minor in creative writing, and in the top 10% of her class from The Benjamin N. Cardozo School of Law, where she served as Articles Editor for the Arts and Entertainment Law Journal.

Now in the third year of her second marriage, she is blending a family of four teenagers and expects much creative material will emerge as a consequence.