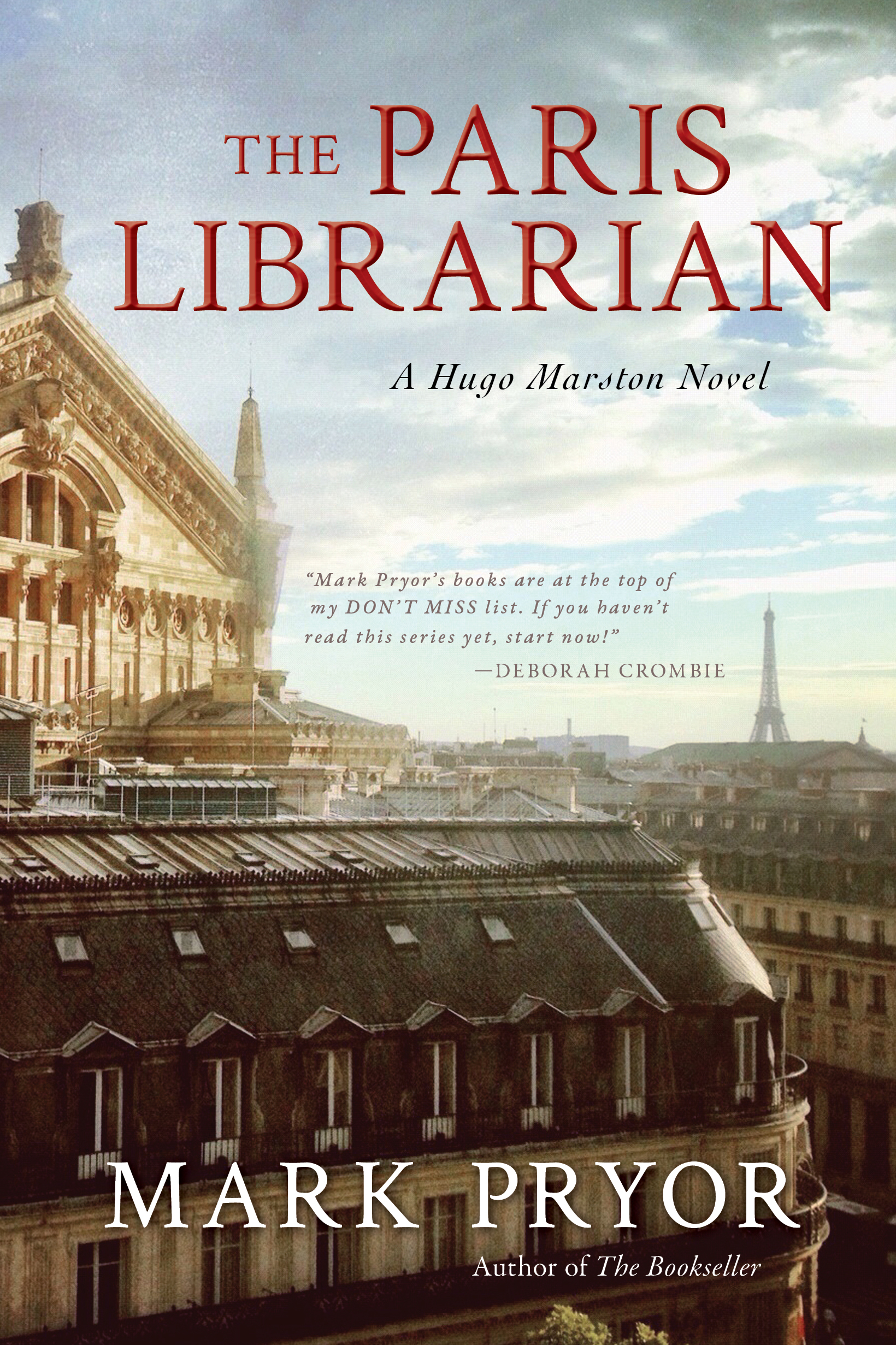 THE PARIS LIBRARIAN is number six in the thriller series starring Hugo Marston, chief of security at the United States Embassy in Paris. The series debuted in 2012 with The Bookseller, which Oprah Winfrey called “un-putdown-able.” In his latest adventure, Marston searches for the killer of a friend who died in a locked room at the American Library in Paris, even though police say the death was from natural causes. To prove he’s right, Marston returns to the scene of a decades-old crime.

The Big Thrill recently checked in with Mark Pryor to learn more about his work and what lies behind his peripatetic life’s journey.

Even though I had read only two previous novels in your Hugo Marston series, I had no difficulty jumping into this sixth one. That is no mean accomplishment for the writer of a series—congratulations. How did you manage to let the reader know enough about Hugo’s background—former F.B.I. profiler and the current security chief at the United States Embassy in France—without dropping spoilers for previous books? Are you willing to share your tricks of the authorial trade?

Thanks for saying that, I try hard to make each book a stand-alone for anyone who happens across it and hasn’t read others in the series. I think that gets easier to do as I get to know the characters better and better. It feels so simple and natural to drop in a few little details about them to show who they are. And of course they do a lot of that revelation themselves in their interactions with each other.

The other thing, and more about this later, is that Hugo is one of those guys who’s not that easy to get to know. I think new readers can sense that pretty quickly, so they maybe don’t feel like they’re missing out. In each book, though, I try to tease more out of him, show more of his deeper character, so hopefully people will be drawn to him and then keep on reading the series to find out more.

Your books display an extensive knowledge of the look and feel of Paris. Where does your familiarity with France come from? Your biography states that you were a journalist in England, and I know you are now an assistant district attorney with the Travis County District Attorney’s Office in Austin, Texas. Did you perhaps have a gap year in Paris when you spent time hanging around iconic cafes smoking Galois cigarettes? Please share how you became so closely acquainted with Parisians and France.

When I was a kid growing up in England, my family used to spend the Christmas holidays in Switzerland, and we’d always drive through France on the way, staying the night in some small hotel along the route. Always an adventure. As the years passed, I grew to love France, and about twenty years ago, my parents moved to a lovely stone house in the Pyrenees Mountains. I suppose all told, I’ve been to Paris 15 times, and to France twice that many.

Of course, these days when I go I take a wee notebook and keep my eyes wide open for the moments I like to put in my books. Most of the snippets of atmosphere you see between the covers of a Hugo book are things that I’ve actually seen.

What is the story of how a journalist in England ends up as an assistant district attorney in Austin, Texas, of all places?

That story begins with my mother, who’s originally from Chapel Hill, NC. I went there to visit relatives and spend time with my grandparents. I loved the place so much I stayed, attending journalism school at the University of North Carolina. When job inquiries in America indicated I needed a US degree, I decided to change track and go to law school down the road at Duke. While there, I met my wife who had family in Texas, so after law school that’s where we headed. I found myself a job with the DA’s office in Austin (after a not very rewarding spell at a fancy law firm), and we’ve not looked back since!

Where did the inspiration for the character of Hugo Marston come from?

The first step was to figure out what kind of hero I wanted. A tough guy, a troubled loner, a tech whizz… so many options. But I kind of like the idea of an old-fashioned cowboy-style hero, tall and strong, a man of few words and great intelligence. That decision was reinforced when I thought about how to write him, because I had a great role model for Hugo: my dad. He was a listener rather than a talker, a man of great wisdom and judgment. Quiet unless you knew him, and then he’d wear a silly hat and make you giggle.

Sometimes Hugo searches for bad guys outside of France.  The Button Man finds him in England, and The Reluctant Matador sends him to Spain. Do you have plans to set him even further afield? I for one would love to see Hugo take on evil doers in Putin’s Russia.

Ooh, that would be fun! And my wife used to live over there and speaks Russian, so I would have a tour guide in place already!  Yes, is the short answer, I do plan to keep moving him around Europe (and maybe beyond!) It suits his personality, I think, to explore new places and it’s far too tempting to resist for me personally—I also love to travel and see new cities, countries, so why in the world wouldn’t I?

You wrote a standalone novel called The Hollow Man. I read it before I met you, and since you wrote it in first person and showed an uncanny ability to get inside the mind of a psychopath, I wondered what you would be like. Now that we’ve met and I see how solid and moral you are, I’m awed by your achievement. The book is amazing but disturbing. Is this character based on defendants you have prosecuted in your day job in Austin, Texas? Do you envision writing other standalone books?

Those are kind words, much appreciated. Yes, Hollow Man is very different, I agree. I’ve been interested in psychopaths ever since I read Helter Skelter when I was a teenager, fascinated by the way a truly bad person’s mind works. The protagonist Dominic wasn’t based on anyone in particular, though. In fact, I can only think of two of the many people I’ve prosecuted who are almost certainly psychopaths, and neither is like Dominic!

Instead of basing him on someone I know, I did a ton of research, and had the good fortune to know a psychologist whose job it is to diagnose such people. He was immensely helpful.

I do plan to write more standalone thrillers, yes. Right now I have in mind a WW2 novel set in Holland. Crime fiction still, though—I’ll be sticking with this genre for sure.

Now that your former countrymen and women in the United Kingdom have voted to leave the European Union, can we expect to read about Hugo Marston tangling with the nastiness that will no doubt erupt in Brussels as the EU bureaucrats and the British work on Brexit details?  Just think of how tempers will be tested and wrath will boil over, leading inevitably to mayhem and murder.

I think you’re right. The vote to leave the EU does seem to open up a multitude of potentially juicy story lines. And why shouldn’t I write a political thriller, eh? Maybe I’ll do it. In truth, I was disappointed with the vote to leave, but I try to look on the bright side and hope for the best. If nothing else, the dollar will be stronger for my visit to Europe next month! 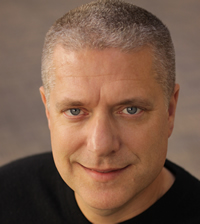 Mark Pryor is the author of The Bookseller, The Crypt Thief, The Blood Promise, The Button Man, and The Reluctant Matador, the first five Hugo Marston novels, and the stand-alone Hollow Man. He has also published the true-crime book As She Lay Sleeping. A native of Hertfordshire, England, he is an assistant district attorney in Austin, Texas, where he lives with his wife and three children.