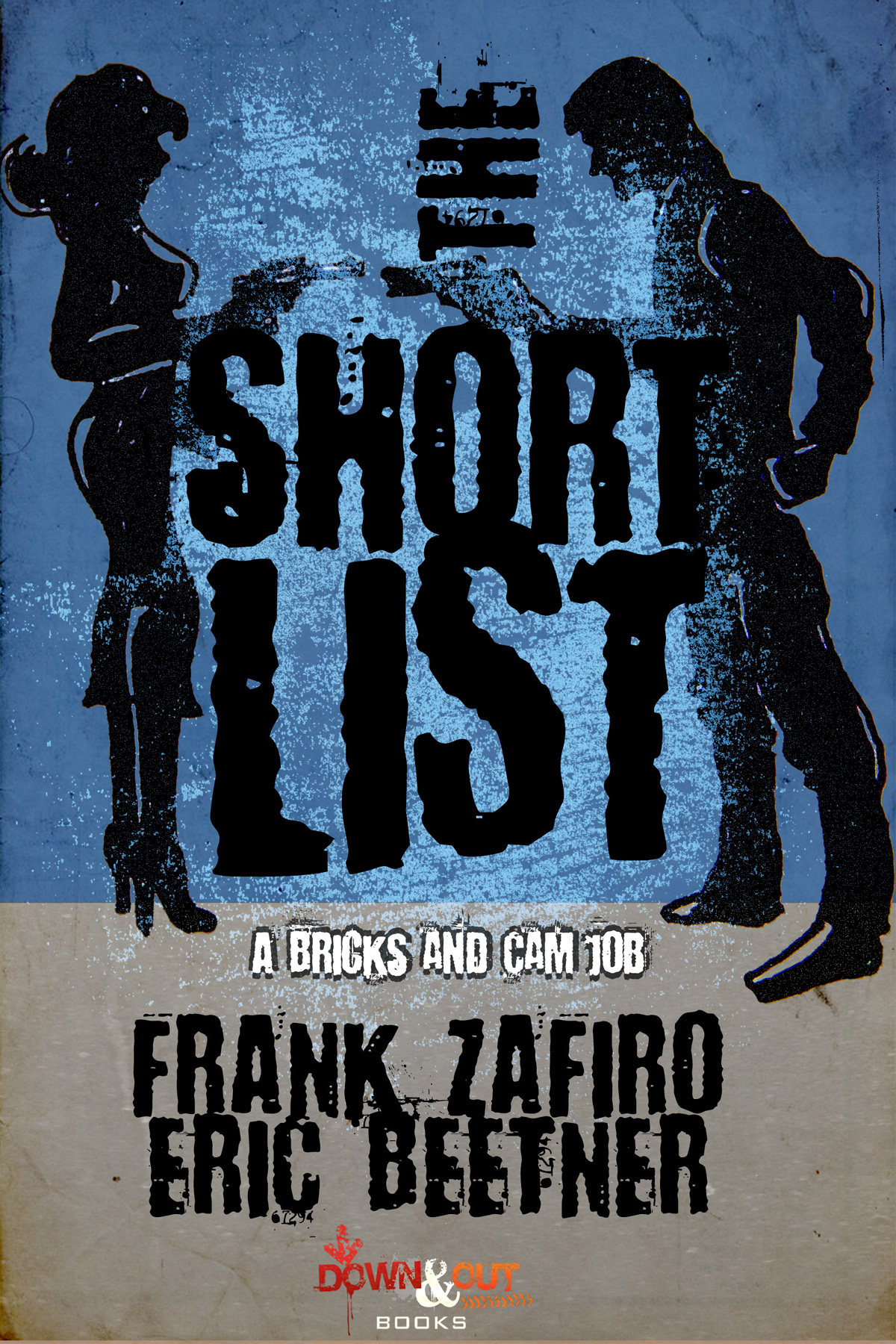 Two partners, working together—that’s the foundation of many crime novels.

THE SHORT LIST adds two more twists: there are alternating chapters from the heroes, Cam and Bricks, written by the partnership of authors Eric Beetner and Frank Zafiro.

Zafiro lives in Washington State and served as a police officer for 20 years. Beetner is a crime author based in LA. While they’ve both written a long list of other novels, this is the second time they’ve collaborated on a Cam and Bricks story.

Beetner took time to explain how this partnership happened and what they expect for the future.

What inspired you to team up for this project?

Frank and I have known each other online for a while, ever since I did a cover for him a few years back. Since then I’ve done several covers for Frank’s books and I really liked what I’d read of his. We started discussing collaborating since we’d both done it with other authors and had enjoyed the process. We hit on this idea and it flowed really well from there so the idea of a second book (and soon a third) was a no brainer.

For THE SHORT LIST we keep to the same basic structure of The Backlist with alternating chapters from Cam and Bricks, but now they are in a different place in their partnership. Cam is still a train wreck though, and Bricks is still smarter than he is.

Thrillers and crime fiction are a different breed, with a long tradition, while other genres tend to pop up and fade. What attracts you to the genre, and where do you see it moving in the future?

Readers will always want a thrilling story. I read to take me to different places and meet characters different from my day to day life, so a story about a suburban marriage doesn’t interest me since I live that every day. And in a good crime thriller you’re seeing someone at their limits. It’s life and death. You can’t help but think what you would do in a similar situation and that makes involving fiction, to me.

I think the future will look very much like the past. The genre hasn’t fundamentally changed much over the years with the exception of more violence and sex and swearing. We’re seeing now a love of the unreliable narrator, but that will fade a bit while something else takes over. What used to be WWII stories are now terrorism stories. Female protagonists have been on the rise, which is great. But those are small changes. A thrilling story is still the king. And within that we see cop stories, criminal stories, military stories, suburban stories, adventure stories, and on and on.

How is working with a partner different than writing solo?

If you find someone you work well with the process isn’t that different. We outline the same as I do for a solo book. We each write at about the same pace, so that’s nice. I liken it to being in a band.

I used to write songs on guitar and bring them to the band and then they really come alive when the drummer adds a part and the bass player finds the line. It’s fun to collaborate and create something greater than the sum of the parts. Plus, you get to read a book as you write it when your partner’s chapters come in. That part is great and it helps inspire what I write next.

Which authors inspire you — crime fiction, thrillers or other writing?

I have many inspirations. Prolific writers like Max Allan Collins, Steve Brewer, and Joe R. Lansdale inspire me to churn out stories while keeping up quality.  I’ve been inspired by Duane Sweirczynski, Jason Starr, Roger Smith and so many more. I love the classics like Jim Thompson, Lionel White, William P. McGivern, Cornell Woolrich.

Any author who can keep me guessing and keep sinking the hooks in deeper as a book goes along I really admire. Recently authors like Brian Panowich, Richard Lange, Ryan Gattis, Samuel Gailey, John Schulian, Clayton Lindenmuth, Larry Watson have all done that. Then someone like Barry Gifford shows me how it can be done differently.

How is this novel different than what you’ve done before–and what’s the plan for future books starring this same pair?

I think the changing relationship between Bricks and Cam was fun to explore. To have former adversaries team up really changes the dynamic of the story. This one is almost a rescue mission. But with Bricks and Cam there is a healthy dose of vengeance in there too. Changing locations kept it fresh, too. It was fun to write about Boston where I lived for a few years.

We both think Bricks and Cam have a future. We’re close to starting on Book 3 in the series so we really hope readers come along for the ride with these two. We’ve talked about many ideas for the pair that would be a new adventure each time and not just a rehashing of the first book. Frank and I are committed to making each installment fresh.

Eric Beetner writes hardboiled crime fiction. A lot of it, with more to come. Many folks have said nice things about his books. He’s won a few awards like the 2012 Stalker award for Most Criminally Underrated author. He lives in Los Angeles where he co-hosts the Noir At The Bar reading series.

Frank Zafiro was a police officer from 1993 to 2013. He is the author of numerous crime novels. In addition to writing, Frank is an avid hockey fan and a tortured guitarist. He lives in Chattaroy, Washington. You can keep up with him on his website.