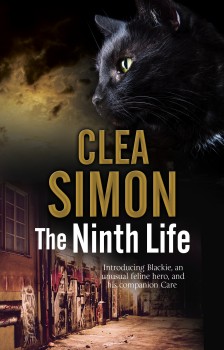 Clea Simon has garnered a name for herself for using animals, and more particularly cats in her novels, now covering three series. THE NINTH LIFE is the first Simon book I read and it won’t be the last. I found myself agreeing with Joseph Finder’s assessment: “Forget everything you know about ‘cat mysteries.’ THE NINTH LIFE is a dark and gritty story of life on the streets told from the unique point of view of a narrator who sees things humans can’t. [It’s] a window into a world of constant and surprising dangers, frustrations, and almost unbearable tension, and it’s one I won’t soon forget.”

Blackie provides the narrative point of view and it is from his non-human perspective that we garner most of our information about a nightmarish urban landscape filled with drugs, abuse, and prostitution.

For each of her novels, Simon starts with a problem of some sort. For THE NINTH LIFE, Blackie can’t remember his past or what has happened to him. His memory begins with him being pulled from a flood. He has no recollection of how he got there or who would want to hurt him and until he finds out, he is vulnerable.

Blackie meets up with Care, a young woman who is also in trouble. For Simon, Blackie came first as a character, and his issues are at the core of the book. She sees him as the guiding mind, while his companion, Care, is the heart.

Simon shows not only an excellent command of language but considerable skill in creating tension and using an animal, more specifically a cat, as the protagonist, telling the tale in the first person. She relies on using cat characteristics as the means for conveying description.

“I simply work to get into that mindset, that persona,” she said of Blackie. “Blackie is a very rational, as opposed to emotional, creature—much like I imagine most animals to be. He has no room for sentiment in his life. It is very kill or be killed.”

THE NINTH LIFE is darker than Simon’s previous 19 mysteries and according to her, “deals more directly with some of my ongoing themes—isolation, the bonds we forge to create families of choice. Also, I put my characters in more danger in this book than I have before.

“It was a harder voice and a harder work, in that I really had to force myself to not shy away from the tough stuff. Years of writing cozier mysteries has made this shying-away a habit, and I had to overcome it.”

Simon hopes readers will recognize “that a mystery with a cat can be an adult thriller. I hope people who wouldn’t ordinarily read a ‘cat mystery’ will give it a chance.”

In researching THE NINTH LIFE, Simon stumbled across “Ernst Haffner’s Blood Brothers because of an article in the New York Times. It’s the only known novel by a German social worker who was active during the Weimar and the rise of the Nazis. It was published in 1932 and chronicles a group of German street urchins in 1930s Berlin. It’s pretty violent, and I used it, very very loosely, as background. I also ended up reading a lot about the manufacturing and selling of illegal drugs.

It may come as a surprise that the author who most influenced her writing career was J.R.R. Tolkien. Why? “He showed me more than anyone else that a book could offer a new world.”

Simon also shared some of her reading tastes. “I’m currently reading Dolen Perkins-Valdez’s Wench: A Novel, about an enslaved woman. It’s really absorbing, wonderful, and horrible. I recently finished both Karen E. Olson’s great new mystery Hidden and CJ Sansom’s Dominion, which I also enjoyed. My TBR pile has signed copies of Hank Phillippi Ryan’s What You See and Joe Finder’s The Fixer, but there’s also William Faulkner’s As I Lay Dying and Owen Barfield’s History in English Words, which I keep pecking at (it’s wonderful).” 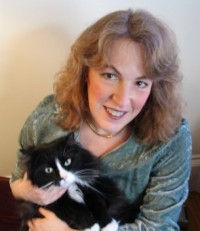 Clea Simon is the Boston Globe-bestselling author of 19 traditional/cozy mysteries in the Theda Krakow, Dulcie Schwartz, and Pru Marlowe pet noir series, most recently Code Grey (Severn House) and When Bunnies Go Bad (Poisoned Pen). In November, Severn House launched her Blackie and Care series with The Ninth Life. A former journalist, Clea lives in Massachusetts, and although her books are getting darker, they still always include a cat. She’s not sure why.

To learn more about Clea, please visit her website.