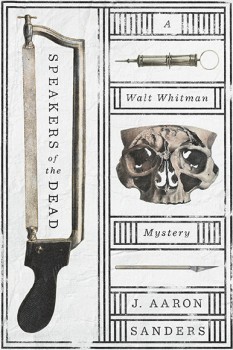 Before he wrote Leaves of Grass or became a famous poet, and long before he had a rest stop named after him on the New Jersey Turnpike, Walt Whitman was a newspaper reporter eager for a good story.

In SPEAKERS OF THE DEAD, debut author J. Aaron Sanders has imagined Whitman as a young man caught up in a story of life—and death—as he reports on the sordid world of body snatching while trying to exonerate a friend accused of murder.

The year is 1843 and the setting is New York City. Sanders, a professor of literature, has done impeccable research into this time and place. Much of what he describes in the pages of SPEAKERS OF THE DEAD is unsettling from our 21st century viewpoint.

It scarcely seems believable that the women at the Women’s Medical College of Manhattan were discouraged from practicing medicine and barred from voting. Justice in New York was often delivered frontier-style, at the end of a rope. Corruption was the norm. Newspaper reporters not only wrote articles, but set them in lead type and printed the papers themselves on hand-powered printing presses, thus earning the nickname “ink-stained wretches.”

All of this historical context smoothly woven into the pages makes reading this novel fascinating. It’s also fun to read about Whitman during a time before he achieved literary fame.

“I like to look for gaps when I’m writing historical fiction,” Sanders said. “How did he become the Whitman of Leaves of Grass?”

The plot focuses on events surrounding the medical college, founded by a couple who are Whitman’s close friends. The husband is apparently murdered by the wife after he allegedly has an affair with a younger woman. The wife is hanged for the crime. Whitman sets out to clear both of their names.

In the process, he delves into the world of grave robbing. At that time, medical schools needed cadavers for study purposes, but there was no legal way to obtain them.

“Grave robbery was a big deal then,” Sanders explained, noting that it was a lucrative criminal activity.

To research Whitman and the time period, Sanders read his original reporting for the New York Aurora, much of which is now available in online archives.

For all of his substantial output as a journalist, there is some evidence that Whitman was not the ideal employee.

“He went on long walks when he should have been writing for the newspaper,” Sanders said. 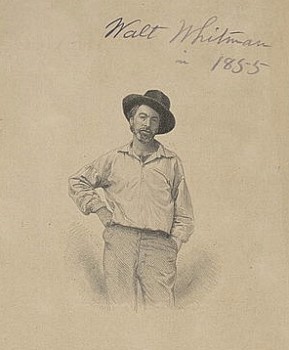 An 1855 image of Walt Whitman from Leaves of Grass. Courtesy Library of Congress.

On those walks, he experienced the lush, sometimes unsavory life of New York, visiting bars and brothels and perhaps witnessing the great fire of 1835.

Several characters are taken directly from those newspaper pages, including grave robber Samuel Clement and Isaiah Rynders, an unsavory politician.

One of the issues of the time was immigration—which may strike a chord with Americans today. Hordes of immigrants arrived daily in New York, where they lived in poverty and were often taken advantage of due to their status.

There was also an air of desperation, despite the promise of America. Sanders noted: “There were not enough jobs for everyone.”

Another 19th century topic that Sanders approaches with compassion is Whitman’s homosexuality and relationship with Henry Saunders, another real-life journalist. Sanders richly imagines their tender relationship, though it had to be hidden from public view.

“I just thought of how he would be as a person who was romantically involved,” he said. He added that it’s interesting that while Whitman could not have been open about his sexuality at that time, he also did not have to make an issue of it.

“We’re way into labels now. While I think it was difficult to be a gay man in New York City in the 19th century, one thing Whitman didn’t have to do was announce that sexuality,” Sanders said.

“I’m a morning guy. I like to get up and write first thing in the morning. Everything goes better.” If he has a good morning writing session, he will sometimes go back to do small bits of writing throughout the day.

Where does he write?

“The place actually changes,” he said. Popular locales are his office, Starbucks, and currently his girlfriend’s living room, with her dog to keep him company. “Everywhere but my own house!”

He takes a unique approach to mapping out his stories. He begins with nine to 12 sheets of blank paper, taped together, to map out the story by jotting down scenes and bits of dialogue. He then carries these maps around with him to his various writing locales. As the story develops, he starts all over again with a fresh expanse of paper.

“I make several maps,” he said. “I like them as artifacts of the writing process.”

Sanders is already at work on a new novel, in which Walt will be working as a newspaper reporter in New Orleans. For research, Sanders will be wandering the historical district and turning to the newspaper articles that Whitman wrote about 19th century American life.

“He did such a good job in chronicling that century as a poet and as a newspaper reporter,” Sanders said, noting that Whitman was born in 1819 and died in 1892. “Whitman was there for much of the entire century.”

As for the Walt Whitman rest stop, situated between exits 4 and 3 on the New Jersey Turnpike, one can almost imagine Whitman sitting on the brick wall out front, watching the masses of travelers come and go.

“I think he would enjoy that,” Sanders said. 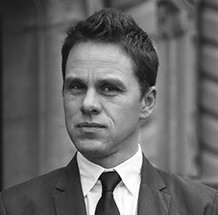 J. Aaron Sanders is an associate professor of English at Columbus State University, where he teaches literature and creative writing. He holds a PhD in American Literature from the University of Connecticut and an MFA in Fiction from the University of Utah. His stories have appeared in The Carolina Quarterly, Gulf Coast, Quarterly West, and Beloit Fiction Journal, among others. Speakers of the Dead is first novel.