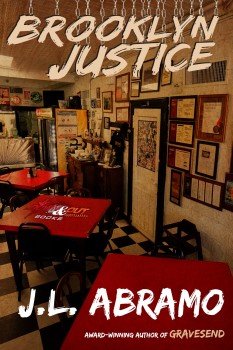 If you think you’d enjoy a wild ride through streets filled with quirky characters involved in every kind of hustle and caper, you’ll want to read J. L. Abramo’s, BROOKLYN JUSTICE.

There’s a lot going on in this book, including a good measure of bad behavior. What holds it all together is private eye Nick Ventura. Brooklyn born and raised, Ventura wanted to be an NYPD detective when he grew up. Unfortunately, by the time he realized the aspiration, his unscrupulous past disqualified him.

“Those who like a tough guy with a soft heart—who is loyal to his friends—would like Ventura,” says Abramo. “He’s a guy who knows trouble, but not how to keep his nose out of it.”

Ventura first appeared in a novella called Pocket Queens. The story ended, but as so often happens, the character would not let his author rest.

“He drove me to write five short stories involving him,” Abramo says. “They appear sequentially—covering a period of ten months—and feature many recurring supporting characters. Call it what you will—a collection of shorter fiction or a novel in stories.”

Or simply call it BROOKLYN JUSTICE. You’ll see a Buick plowing through a storefront with a dead detective aboard; a fatal rendezvous in the shadow of a Coney Island landmark; a man gunned down walking his dog in the wrong place at the wrong time; a mob boss assassinated leaving a neighborhood restaurant, and so much more. And Ventura is involved with all these events. As you can see, Ventura is not trying to save the world from total destruction, or dealing with villains who want to rule the world. This is a different kind of thriller.

“Most of what I write has to do with the characters and their interrelationships,” Abramo says. “How the circumstances either pull them together or set them apart. Many of the cast of characters, friends or foes, cross paths—often unaware they are part of the same play. I find that the small stage provides an intimacy and realism which I personally find more difficult to represent on the world stage.”

And while the focus is on characters, the setting is also significant, as the title suggests.

“Brooklyn has that rare quality of being a big city with a small town element,” Abramo says. “It is a borough which could be the fourth largest city in the United States—but it has always been defined by its neighborhoods and ethnic enclaves. Brooklyn is unique because it is Brooklyn—it is not like any other place—and is it a perfect setting for a crime fiction because has such a rich history of criminal activity.”

There is no shortage of fascinating characters in the BROOKLYN JUSTICE stories: mob guys, professional hit men, crooked businessmen, gold diggers, drug dealers, corrupt cops, gamblers, extortionists, vigilantes, and a few street punks inhabit that stage. But Abramo is reluctant to call all of them villains.

As he says, “Often circumstances, particularly the search for elusive justice, can lead good people to break the law and blur the line between the heroes and the villains.”

Abramo understands the human psyche better than most, having earned an MA in Social Psychology. He says his studies in psychology and sociology always influence what he writes, but social psychology adds another element.

“Rather than looking at the individual or at society-at-large, it gives me perspective into the workings of smaller social groups and the dynamics of their membership—be it a mob crew in a Brooklyn social club, a detective squad in a police precinct, a group of casual acquaintances involved in a common pursuit, or a group of more intimate friends helping each other get through the day.”

I think Abramo’s work has some of the flavor of Raymond Chandler, Donald E. Westlake or Elmore Leonard. Those are, of course, big boots to fill, but if that’s the style of gritty, human story you enjoy, you should give BROOKLYN JUSTICE a try. 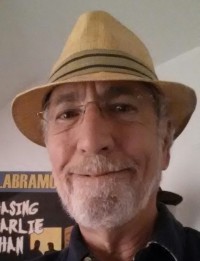