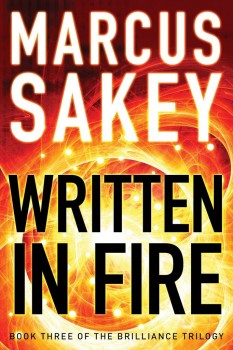 Brilliance and its sequel, A Better World, earned Marcus Sakey a legion of new fans. Now Sakey proves he knows how to bring in the big finish with WRITTEN IN FIRE, the closing act of this powerful trilogy.

The basic idea for the series is deceptively simple. What if one percent of the world was born savants, able to do thing the rest of us couldn’t? In Sakey’s world humanity has struggled to cope with the brilliants – that one percent of people born with remarkable gifts – for 30 years. All efforts to avoid a devastating civil war eventually fail. It’s a grand, high-concept idea that Sakey says he got from his wife.

“She had recently gotten her Masters in early childhood development,” Sakey says, “and so always had fascinating bits to share about how the brain works, especially the autistic brain. Which got me wondering, what if about the same percentage of people were born with a similarly specialized way of thinking, only the impact was cranked up and the social side effects were removed? ”

In this case, society’s reaction to these special people leads to the White House in ruins, Madison Square Garden turned into an internment camp, and an armed militia of thousands marching in Wyoming. In some ways it may sound familiar. Sakey himself will tell you that there have always been stories about the exceptional amongst us, from early mythology to the Arthurian legends to the X-Men to vampire tales. It’s his approach to that situation that makes this story unique.

“Where I tried to do something different was that instead of making the story about the exceptional people, I focused on the rest of us,” Sakey says. “On what was happening to the world, how mistrust and fear and intolerance were tearing us apart. The classic dystopian structure is to start far in the future, after the fall of civilization; I wanted to go the other way, and show the thousand blows that set it staggering and, possibly, collapsing.”

The protagonist of WRITTEN IN FIRE, Nick Cooper, has spent his life fighting for his children and his country. He’s the top gun of an agency that tracks and executes antisocial brilliants, and he is a brilliant himself. In the book every brilliant is different. Cooper’s gift is a heightened level of intuition. He builds patterns of how people think and act, and uses those to predict what they’ll do next. He’s committed, but is he a hero?

Sakey says, “Cooper’s done too many hard things to see himself as a hero, but a good guy, sure. He’s a loving father, dedicated to making a better world, even if that means hunting his own kind. He hates bullies, dislikes agendas and games and facades.”

To save the day, Cooper must risk everything he loves to face his oldest enemy—a brilliant terrorist so driven by his ideals that he will sacrifice humanity’s future to achieve them. John Smith has a gift for strategy and planning and is described in the book as the strategic equivalent of Einstein. He is Cooper’s principle adversary, but Sakey wouldn’t call him a villain.

“I don’t believe in villains,” he says, “especially when you’re talking about complex topics like society and politics and terrorism. People capable of monstrous things? Yes. Shattered, broken people who don’t fit? Sure. But not villains.”

Another writer might have succumbed to the temptation to making this a “superhero action” series, but Sakey was determined to stay in normal “thriller” territory. He worked to make everything about these books feel like it was perfectly possible.

“Take the brilliants—none of them can shoot lightning or fly or pop claws out of their hands,” Sakey says. “Every talent is one that is at least theoretically possible for the human brain. It’s just a matter of how they recognize patterns or parse sensory data differently, and the ways in which that changed their perception. If they could hurl cars or move faster than sound, the books wouldn’t be about a conflict within humanity. They’d be about a conflict between humanity and an alien presence.”

This thriller is definitely entertainment for smart people. Sakey says his hope is to keep readers up too late, to compel them to read just one more chapter, all while kicking around ideas that linger. I say WRITTEN IN FIRE will accomplish all of that and more, and every thriller fan should pick it up and see how this dynamic trilogy ends. 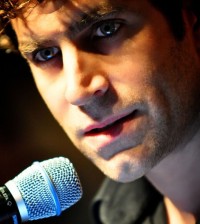 Marcus Sakey’s thrillers have been nominated for more than fifteen awards. They’ve been named New York Times Editors’ Choice picks and have been selected among Esquire’s top five books of the year. His novel Good People was made into a movie starring James Franco and Kate Hudson, and Brilliance is currently in development with Legendary Pictures. He lives in Chicago with his wife and daughter.