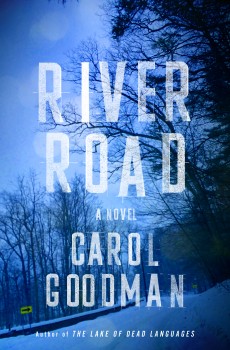 A mile from Carol Goodman’s house is a long and winding road. Haunting as it is picturesque, this stretch of highway was the catalyst for Goodman’s return to writing adult fiction. Well, that and an unfortunate incident between her car and a deer.

RIVER ROAD begins with Nan Lewis—a creative-writing professor at a state university in upstate New York—driving home from a faculty party after finding out she’s been denied tenure. Tired, a little tipsy, and a lot pissed off, she doesn’t see the deer that darts in front of her vehicle until it’s too late. But when she gets out of the car to look for it, the animal is nowhere to be found.

Frazzled, and eager to take shelter from the oncoming snowstorm, Nan goes home, pours herself a drink, and vows to forget the entire night. That is, until the next morning, when the police arrive with horrifying news—one of Nan’s students, Leia Dawson, was killed on River Road the night before. And because of the damage to her car, Nan is suddenly suspect number one. Nan now finds herself ostracized by the very community that once rallied around her when her own daughter was killed in an eerily similar accident on the same road.

“The experience of hitting the deer stayed with me for days, weeks,” Goodman says. She even wrote a poem about it, trying to process her feelings and shake off the overwhelming sadness.

A month or so later, a tragic double hit-and-run in her community further solidified Goodman’s need to write RIVER ROAD. “Two college girls were killed only a few miles from my house. This incident also impacted me greatly.”

The woman responsible for the deaths was caught, but Goodman became fascinated by her, desperate to understand the experiences that would have led this woman to make choices that ultimately ended in tragedy. As soon as she wrote the first chapter of RIVER ROAD, Goodman had built the foundation for her protagonist, and the story branched off from there, forcing the author to stretch outside her comfort zone.

“I realized Nan had lost a child, something, as a mother, I’d always been afraid of writing about,” she says. “I couldn’t understand how someone could survive the loss of a child and then have to deal with being accused of a similar crime.”

At the book’s start, Nan is merely “surviving”—coming to terms with having to live in the same community with the woman who killed her daughter, her dysfunctional and judgmental family, and a series of professional disappointments. Drinking becomes her coping mechanism—which obviously works against her plea of innocence, especially when Leia’s DNA is found on her car.

So, if Nan didn’t kill Leia, who did?

Goodman does a great job of peppering in the clues that bounce from one potential suspect to the next, building in twists and turns while retaining story authenticity. For Goodman, this is the key to the novel’s success.

“A mind blowing twist is always great, but it’s more important to make sure the book is psychologically true,” she says. “It has to make sense.”

To achieve this, Goodman takes pages of notes, jotting down the main plot points without committing to a formal outline. She focuses on setting—such as the hauntingly beautiful winter landscape in RIVER ROAD—and characterization, the two most important elements in her writing, whether it’s thriller, young adult fantasy, or any of the genres that have captured her muse.

Thriller fans may best remember Goodman for her mesmerizing novel The Lake of Dead Languages, but Goodman has written 14 books, including Blythewood, which was named a Best Young Adult Novel by the American Library Association. Now that she’s returned to the world of suspense, Goodman is hopeful she can write for both markets. There’s certainly room, even if it means further balancing her professional goals with the demands of her non-writing life.

“For many years, I wrote with a young child at home, and for me, writing started when I walked her to school,” Goodman says. “I have to remind myself, sometimes, that it’s okay if I don’t write every day.”

Fortunately, Goodman’s husband—a poet whom she collaborated with on her young adult series—understands the demands of creativity, allowing Goodman to carve out the hours she requires to dive into her work. Regardless of which world she’s in, Goodman says the ideas keep coming. And for now, she’s taking time to reconnect with fans of her early work, and welcome new readers into the fold.

“I am really happy to be back in the mystery world,” she says.

With RIVER ROAD, Goodman proves she not only belongs in it, but that perhaps absence truly does make the heart grow fonder. 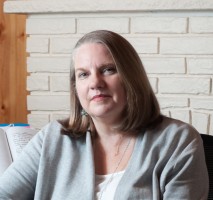 Carol Goodman is the author of fourteen novels, including The Lake of Dead Languages and The Seduction of Water, which won the 2003 Hammett Prize, and, under the pseudonym Juliet Dark, The Demon Lover, which Booklist named a top ten science fiction/fantasy book for 2012. Her most novel, Blythewood, was named a best young adult novel by the American Library Association. Her books have been translated into sixteen languages. She lives in the Hudson Valley with her family, and teaches creative writing at The New School and SUNY New Paltz.