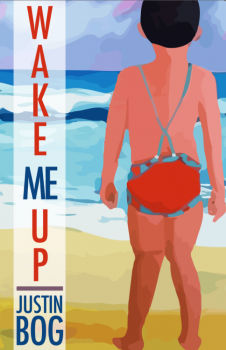 Following two critically acclaimed collections of short fiction, Justin Bog’s novel WAKE ME UP has arrived from Gravity Books. It’s a psychological thriller that unfolds from the point of view of Chris, a small-town teenager who’s sunk into a coma due to a brutal beating.

Set in 2004 in a college-town in Montana, the story unfolds in Chris’s voice from the depths of his coma. He sees how his own wrath and other circumstances led him into harm’s way.

Chris wants—needs—the reader to hear his story so he can wake up.

Just as he did in his award-winning short fiction, which includes the Suspense Magazine award-winning anthology Sandcastle and Other Stories, Bog deploys a deft and thoughtful approach to crime and its aftermath.

Tell us a little about the novel’s origins. What inspired you to tell the story from the point of view of a crime victim in this way?

The narrative conceit came, after a bit of experimentation, with a bolt-of-lightning epiphany, the best kind of creative moment. I began the story with the narrator’s father contemplating something dark in a moment of weakness. I began to answer the question: What brings a husband and father to such a precipice?

The teenage son comes into focus alongside the father’s secretive nature. Because of his father’s powerful secret, Chris acts out in a rage and becomes the victim of a heinous crime. He lays comatose in a small, college-town hospital, and begins to tell the story as a phantom from a black limbo state. With a conscience wise beyond his fifteen years, Chris sees everyone around him and how they dance around their own little secrets. Will he wake up? If he does, whose justice is fair?

Your conceit suggests literary fiction to me. How did it work in a crime-suspense-oriented story?

You’re right, it leans heavily towards literary crime fiction. My favorite novels like The Secret History, The Lovely Bones, and the twisty psychological novels of Gillian Flynn inspired me to take risks with the narrative structure. I call the book a psychological “why-done-it” rather than a “who-done-it,” where revelations of character drive the narrative.

Tell us a little about the key characters in this story. How did they develop in your imagination? What mental mode did you have to slip into to write in the voice of a teenage boy?

Chris is the narrator. He’s a bored teenager, and early on his secretive nature drives four bullying classmates into a brutal assault. I hope for a sympathetic voice, but he’s the son of very smart people, in a long line of geniuses, so little gets past him. His mother is a poet and professor at the college in a fictional city in Montana. His father is an attorney. His father’s father had been a gem dealer and possible spy during the cold war. Everyone is a bit distant emotionally and this plays into where the characters find themselves on the fateful day the crime takes place.

The next major player is a short fiction writer named Deepika, who begins an affair with the boy’s father, becoming a catalyst for some of the action. The teenager’s voice came together as a rhythm observed over the years from my own volunteer coaching position at local high schools wherever I’ve lived. I wanted Chris’s actions to be as natural to a teenager in 2004 as possible. He’s a bit of a loner nerd type and this helps him hide from others and himself.

How did you choose Montana as a setting? Was there something unique about the state that offered a good backdrop for this piece?

Many years ago, after the transmission failed in our car during a road trip to Glacier National Park, I was stranded for three days in Missoula, Montana. So, the city I describe is loosely based on Missoula. A fictionalized version. After I had finished writing a first draft of this book, a major news event struck me hard. Two young gay men were assaulted by a group of bat-wielding bullies in Missoula. I don’t believe there was much punishment from the system at that time.

In my story the narrator is deeply closeted, still questioning his own impulses throughout. No one knows whether Chris might be gay, but the bullies still taunt him and bring him to a destructive moment. Just this December, a group of bullies were tried (most taking a plea bargain) for an assault that took place in Philadelphia, 2014. There have been 14 assaults on gay men in Dallas so far this past year, with no arrests. Hate crime numbers are on the rise, with more today than back when I completed WAKE ME UP. Sad.

You have a character writing a story in the novel, and that story actually exists in one of your collections, right? Tell us a little about the storyteller-within-a- story aspect of WAKE ME UP. What inspired you to expand the world of the novel in that way?

Deepika is writing a series of interconnected short stories within the narrative of WAKE ME UP. She is a writer of no small acclaim, and Chris, in his ghostly state, hovers around all of the characters, main and peripheral. At different points Deepika writes out some tall tales and Chris reads over her shoulder. Her stories take on a duplicate world based on Chris and his attack. As she writes about Chris and his family, it’s a fictionalized version with an entirely different setting and narrative structure.

There are only two short sections of Deepika’s “fiction” in the body of WAKE ME UP. I cut a third section as it was long and only served to reinforce the themes in a heavy-handed way. Perhaps later I’ll publish it later on its own. I enjoy reading novels that go into different places. Aunt Julia and The Scriptwriter by Maro Vargas Llosa is probably the strongest influence. I loved the way he alternated chapters between reality and fiction within the fiction.

Your dad did the cover art for WAKE ME UP. How did that come about, and what was the collaborative process like? Did you make suggestions or did he take the novel and envision that cover moment?

Both my parents were artists who met at the University of Iowa Art Department in the late fifties. They had five children, including two sets of twins. My father ended up teaching art history, painting, life drawing, and more at Denison University in Granville, Ohio, while my mother taught art to junior high students from the mid-seventies until retirement in 2005. They have both died, but I have access through the family to many of their paintings. They were obsessed with painting, and my father produced more than 120 pieces from his tiny room in an Assisted Living Home until his death in 2012. A painting detail from “Ocean Boy” became the book cover, as conceived by cover designer Shari Ryan and approved by the publisher, transforming it into something remarkable. This boy with his back turned to us may or may not be the boy in the coma. What does he see, what does he know?

What’s your writing process like? You have some collections of short stories on the market now as well as this tale, so you’re producing quite a bit of work. Do you have a regimen that keeps the words coming?

I think about writing, a story, a new detail, almost every waking moment. What I’m going to do next. Where a character needs polishing. How a book comes together. It’s obsessive. I begin writing many stories and the stronger ones continue to the end. Though I rarely plot and outline, I keep all of the characters names in my head. WAKE ME UP has many characters, but none of them was forgotten and each has a journey. I also love writing short fiction. Shirley Jackson is my favorite, and I hope to write something as sharp one day. The story “Sandcastle” was my attempt at recreating her “The Lottery” type of tale, with a huge unforeseen twist. I grew up reading the short stories of Raymond Carver, John Cheever, and Rachel Ingalls. When in writing classes, these names kept coming up. I do try to get a few words written each day, but that doesn’t always happen. I don’t beat myself up when I fail. Tomorrow is a newer lesson.

You’re active in indie writing circles. Do you find strength in the writing community at large? Since writing is a lonely art, what connections do you think are essential for creative workers?

I love the online writing community, to be among peers doing good work. Writing isn’t a competition (some may look at it as such, but I don’t) and I love seeing friends succeed at all levels. Reading is the most important step. Read old and new. See what risks other writers are taking and take your own. Challenge yourself.

What’s next? Another novel? More stories? What do you want to do down the road with your writing work?

I’m halfway through the next two books as I type. One, tentatively titled Horrorstruck: Four dark novellas, is moving along at a good pace, making me shiver. Here my dark-tinged tales tilt directly into the horror genre. My novel A Play Demonic is at a turning point, where characters will be auditioning for roles in a dark play brought to the attention of the local theater ensemble by someone with horrifying motives. I expect these books will see light of day in the year following WAKE ME UP. After that? I’ve already begun writing that next psychological tale, and was recently asked to contribute a dark story to an up-and-coming literary horror anthology that should debut towards the latter part of next year.

Do you like hearing from readers via your blog and social media presence?

Definitely. Readers, and those who love my tales (I even enjoy the shocked reaction from those who don’t, since these readers became disturbed in the most awful way; dark tales should disturb!), please let me know what you think. My blog is www.justinbog.com and you can find me across all social media. Please say hi.

Most important of all, where will people be able to find WAKE ME UP?

WAKE ME UP can be ordered at all booksellers, independent, large, and online. The book is ready to print and I can’t wait for the response. 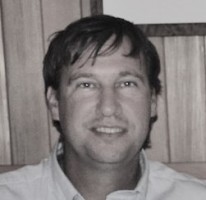 Justin Bog is the critically acclaimed author of two short fiction collections, including the Suspense Magazine award-winning anthology Sandcastle and Other Stories, which was also a Finalist for the Ohioana Book Award. Wake Me Up is his first literary crime novel.