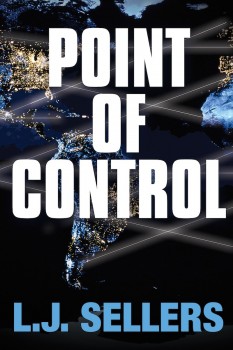 L.J. Sellers may have had a rough and busy year in 2015, not the least of which included a broken leg, but she took time to chat with me about stand-up comedy, writing screenplays, and exploring the world of a sociopath in her new thriller POINT OF CONTROL.

Known for her wildly popular Detective Jackson series and a spin-off series starring Agent Dallas, Sellers has also gained acclaim for her standalone novels like The Baby Thief. The standalones are her way to explore new characters, new settings, and new plots. “Police procedurals can be limiting,” she says, “because detectives have to follow an investigative structure. They also don’t allow me to write from the antagonist’s point of view—because the ‘who’ in a whodunit has to be saved until the last moment. Writing the bad guy is often my favorite part of the process.”

Ironic coming from a woman who says humor is her outlet. She loves funny movies and has actually written three comedic screenplays. Balancing the gritty thriller writer and the comedian wasn’t easy at first. “I felt like I needed help with the comedic elements and dialogue. So I took a comedy writing class. That’s how I ended up doing standup in public.” Even before she wrote and performed her own routines, she was a fan of live standup and continues to attend acts whenever she can. “I still write short standup sketches just for fun, but I rarely perform. I keep telling myself I will again—soon. But I’m so busy!”

Sellers has an entire list of things she’s trying to make more time for, including learning to play the hand-drum she bought three years ago and capitalizing on what she learned in that comedy writing class. “I have a PI series planned with another writer that will have humorous elements. I’m due for that kind of change.” A new series is just one component in her upcoming production schedule. “The 11th Jackson book comes out next June (Death Deserved), and I’m writing another standalone thriller that is very different from anything I’ve done. I may self-publish, but I’m also considering submitting it to Skyscape [another Amazon Publishing imprint].”

Sellers has been with Amazon’s Thomas & Mercer since signing an incredible 11-book contract with them in 2012. The deal included nine backlist books and two front-list Detective Jackson novels, the rights of which she negotiated back from her original small publisher in 2010. Like many successful traditionally published authors, Sellers believed she could find a better, more direct market for her work, so she decided to head out on her own. She has built a considerable career in the past five years, with Thomas & Mercer continuing to publish her Detective Jackson series. “In addition, I have a three-book Indie [self-published] series based on an undercover Agent Dallas, who works for the FBI. POINT OF CONTROL will be the first front-list standalone thriller that I’ve published with T&M, and I’m eager to see how they promote it. Our hope is that it will attract a wide array of new readers.”

POINT OF CONTROL, which both Carson Black and Tim Hallinan call “nonstop action,” is also the first book where fan favorite Detective Wade Jackson doesn’t make an appearance. “I gave him cameos in all my other standalones, but it just didn’t work for this book because of the location. I’m trying to branch out into new settings.” Considering the overwhelming fervor for Detective Jackson, I ask if she’s worried about disappointing some fans. “None of my early readers complained that Jackson wasn’t in the story. I’m lucky to have terrific beta readers who are open to whatever I write. But some of my readers will always say, ‘I like the Jackson books better.’”

In POINT OF CONTROL readers will meet Andra Bailey, of which Publisher’s Weekly says, “Sellers combines a deeply flawed, yet sympathetic lead, with a clever and plausible plot device.” Bailey is a sociopathic FBI agent. “I’m fascinated by sociopaths,” Sellers says, “especially since learning that many of them are highly functional and not inherently destructive. Some are quite evil, of course, but many are not. They just don’t empathize with other people or have the ability to respect rules and boundaries.”

Sellers has a history of developing interesting characters who function within the structure of the bureau. “I also have a transgender FBI agent (Agent River) who has roles in both my Jackson and Dallas series.” It is this unique characterization and Sellers’s penchant for using subject matter that is real, timely, and plausible that make many readers and reviewers see her books as good candidates to be turned into screenplays—and not the funny kind.

So, how does a woman who loves Baggallini handbags and wears Liz Claiborne begin to research sociopaths? Using the same methods she did to earn the Grand Neal journalism award. Sellers proved her research chops as a journalist long before she became a thriller novelist. “As a journalist I would go directly to sources, but with sociopaths, that’s not really possible. Plus, they lie!” she jokes. “I read several books about sociopaths, including one written by one. It was fascinating to get inside her mind and see how it works.”

Sellers also has contacts at the bureau. “I have many FBI sources, here locally in Eugene, and I’ve made a great contact with the public liaison person in the main bureau in Washington, D.C. I visited with her personally, and now she opens doors for me at FBI offices wherever I need to go. Such as Denver, which I visited recently for a book I’m writing now.”

When asked if she’s ready for 2016, Sellers is enthusiastic and positive, traits that have allowed her to keep to a formidable multi-book schedule annually. “I’ll be keeping busy!” she says. “Maybe I’ll fit in a little overdue standup time, but those hand-drum lessons will probably have to wait.” 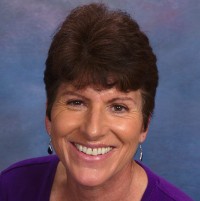 L.J. Sellers writes the bestselling Detective Jackson mystery/thriller series—a four-time winner of the Readers Favorite Awards. She also pens the high-octane Agent Dallas series and provocative standalone thrillers. Her 17 novels have been highly praised by reviewers, and she’s one of the highest-rated crime fiction authors on Amazon. L.J. resides in Eugene, Oregon where many of her novels are set, and she’s an award-winning journalist who earned the Grand Neal. When not plotting murders, she enjoys stand-up comedy, cycling, social networking, and attending mystery conferences. She’s also been known to jump out of airplanes.

To learn more about L.J., please visit her website.