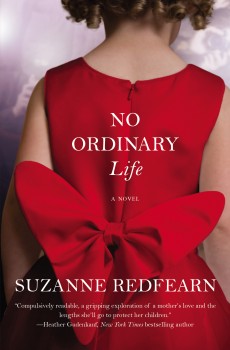 Suzanne Redfearn is no ordinary author. She is an inventor, golfer, surfer, kick boxer, mom, wife, and self-proclaimed geek.

She writes about everyday moms, dads, and children who are put in untenable situations where the conflict is tangible and the pacing moves at lightning speed. Not unlike the Wonder Laces she invented, her latest novel, NO ORDINARY LIFE (Grand Central, out this month) is taut and gripping.

NO ORDINARY LIFE centers around a family led by a mother, Faye, who is estranged from her truck-driving husband, Sean. Hustling to make ends meet and protective of her family, Faye has to uproot her three children, Tom, Emily, and Molly, to live with her mother. During the transition, Faye is interviewing for jobs with her children in tow. Four-year-old Molly brings every parent’s worst fear to life when Faye cannot find her in a teeming outdoor plaza. During her frantic search, she discovers a huge crowd cheering for her precocious Molly, who is dancing with a sidewalk artist using the steps she learned from Bo, a family friend. As often happens today, an onlooker uses a phone to make a video of the performance and it goes viral on YouTube. The millions of views lead to an agent tracking down Molly, who lands a gig dancing in a Gap commercial. That performance leads to a starring role in a hit children’s television show called, The Foster Kids.

The set up is beautiful. Struggling Faye finally is able to see the possibility of financial freedom and better care for her children. But her other children are unhappy with the relocation away from friends. Emily, the oldest, is a twelve-year-old middle school student with enough “access to excess” to be dangerous. Tom is nine and shy to the point of speechlessness. Meanwhile, Molly is growing more famous and rich, Faye plays stage mother and manager. What could go wrong?

Finding no similar fiction story on the market, Redfearn wrote NO ORDINARY LIFE after reading the autobiography of Little House on the Prairie television star Melissa Francis. Redfearn says, “It was heartbreaking, and I knew, after reading it, I had my jumping off point. It required a child too young to choose a path for herself…”

At four, Redfearn’s Molly indeed cannot choose her path and the question becomes, who will? Anyone who has stood in a supermarket line knows the potential headline-grabbing trials of child stardom: helicopter parents, absent parents, greedy parents, substance abuse, brutal hours, and ruthless directors. In NO ORDINARY LIFE, Hollywood and the estranged Sean combine to play equally compelling antagonists, creating conflict on every page. Both Hollywood and Sean impose their will on Molly and Faye, while the repercussions for Tom and Emily are equally threatening.

The narrative is unpredictable, in large part driven by Sean’s reappearance. Does he love money more than his children? How far will he go to harm Faye? Likewise, is Faye strong enough to stand up to the Hollywood powers that push Molly beyond any four-year-old kid’s breaking point? Can she perform her duties as stage mom while also successfully raising Tom and Emily? And as a young thirty-something mom, are love and security a possibility for her?

“I wanted to capture the collateral damage of Hollywood,” says Redfearn. She does that exceptionally well leaving no character spared from Hollywood’s seductive mirage. Evil lurks and fame seduces around every corner. Redfearn gives readers kind-hearted and well meaning characters, but Faye’s life is a constant struggle to determine friend or foe. Redfearn takes readers inside Hollywood’s “savage and dangerous” world and gives them a dysfunctional family that seems to have sprung from the scandalous tabloids in those supermarket aisles.

NO ORDINARY LIFE is a thrill a minute and another masterful story from Redfern. 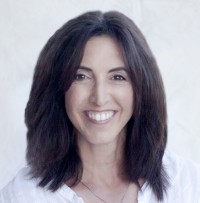 Born and raised on the east coast, author, Suzanne Redfearn, moved to California when she was fifteen and currently lives in Laguna Beach with her husband and two kids, where they own a restaurant called Lumberyard. Her debut novel, Hush Little Baby, was released in 2013 and received rave reviews. RT Book Reviews chose it as a Top Pick and nominated it as Best Mainstream Fiction. Publisher’s Weekly calls it a “smart, suspenseful debut.” Kirkus Reviews describes it as “A compelling tale of deceit, violation and anguish that ratchets up the tension page by page.” And Target chose it for its Emerging Author Program and as a Target Recommends selection. Suzanne’s second novel, No Ordinary Life, is scheduled for release in February 2016. Prior to becoming an author, Suzanne was an architect specializing in residential and commercial design.

To learn more about Suzanne, please visit her website.