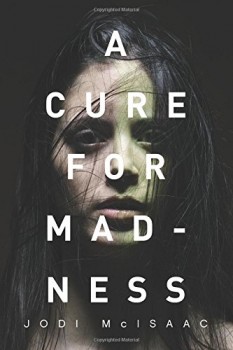 The horror of a pathogen is that it’s an invisible killer, striking at random, dispassionately, ruthlessly. In Jodi McIsaac’s latest novel, A CURE FOR MADNESS, she takes that nightmare even further, with a pathogen that turns its victims into psychotic killers. The outbreak begins in Clarkeston, a small town in the backcountry of Maine. With the pathogen spreading like wildfire, everyone wonders if they might succumb to the disease and start killing friends and family.

When Clare Campbell’s parents are murdered, she must return to the place she has spent her adult life avoiding, her childhood home. She vows to get in, see that her parents are laid to rest, and get out again. But as soon as she arrives those plans begin to fall apart: She becomes the reluctant guardian of her schizophrenic, sometimes violent, older brother, Wes. The isolated acts of violence among the townspeople are multiplying at an alarming rate. And the psych ward where Wes is being treated is overwhelmed. Old friends are attacking their families.

Clarkeston is quarantined to stem the spread of the incurable pathogen, and the town descends into chaos. Meanwhile, Clare must care for her volatile brother, something she’s not emotionally prepared to handle, especially since they share a secret, the secret that drove Clare away just when Wes needed her most. Then, Wes draws the interest of a government agent, and Clare faces a horrifying choice: protect her brother or help save the world.

A CURE FOR MADNESS is both chilling and heartfelt— and I guarantee it will grab you and not let you go.

McIsaac was kind enough to answer some questions for The Big Thrill, and share her journey, her writing process, and the realization of a childhood dream.

A CURE FOR MADNESS is a departure for you after your well-received fantasy thrillers, the Thin Veil series. What inspired you to delve into a medical thriller?

I love my Thin Veil series but I didn’t set out to become solely a fantasy writer. Once that series was done I wanted to try something new. Because someone close to me has schizophrenia, I was inspired to write about the relationship between a mentally ill and a mentally well (but emotionally damaged) person, and to explore the value we as a society place on the mentally ill. Throw in a terrifying pathogen, and A CURE FOR MADNESS was born.

As a liberal arts grad, the intricate science behind the pathogen at the heart of this medical thriller must have demanded a great deal of research. Could you tell us about that?

Yes, the research was incredibly daunting at first. I don’t have a science background, so this was a particular challenge. I started where I always start with research—in the children’s section of the library. Who knew there are picture books about deadly contagious diseases? From there I hit the Centers for Disease Control website, various scientific journals, and—most importantly—neurologists, brain surgeons, and psychiatrists, who were very generous with their time and expertise.

You imbue your protagonist with an impressive amount of depth. What inspired your compelling lead, and how much of her comes from who you are?

Thank you! I have to admit there is a lot of me in Clare, more than my other protagonist. I think that comes from understanding her dilemma—she loves someone with whom she can’t have a normal relationship, and it weighs on her. She’s torn between wanting to protect her brother and wanting to escape from him. And though our external situations are different, our internal experience is the same.

You’re a freelance copywriter and a mother of two. What inspired you to turn to writing novels, and how do you carve out your writing time with such a busy schedule?

I’ve wanted to be a writer ever since I was a little girl, but life always seemed to get in the way. First it was college, then grad school, then my family and career. I was 30 years old when I realized life was never going to get less busy. I didn’t want to be on my deathbed wishing I’d written a novel. So despite running my own business and caring for two pre-school children, I made it happen. I got up at 5 a.m. and wrote for two hours every day. That resulted in Through the Door, the first book in the Thin Veil series. Now my kids are in school and I can write full-time. It’s pretty amazing actually—how often does a childhood dream come true?

You’ve been a short-track speed skater, a speechwriter, and a fundraising and marketing executive. Have these experiences informed your fiction writing?

Hemingway said, “In order to write about life first you must live it.” I’ve been fortunate enough to truly experience life in both beautiful and painful ways, all of which makes me a better writer. I’ve lost a child—so does Cedar, my protagonist in the Thin Veil series. I’ve struggled with a loved one with mental illness—so does Clare in A CURE FOR MADNESS. And I’ve worked in humanitarian aid—so does my protagonist in my forthcoming book, Bury the Living. Every experience, good or bad, can enhance your writing if you’re willing to use it.

Can you tell us about your writing process? Are you an outliner, a seat-of-your-pantser, or a hybrid?

I’m most definitely an outliner. The outline for my first book was 80 pages long! Fortunately, I’ve learned to streamline a bit since then. I usually start with a month or two of research, then it’s on to character sketches and Post-it notes as the story starts to come together. I use a variety of story structure models to help me brainstorm and outline—everything from Propp’s Morphology of the Folktale to Brandon Sanderson’s subplot model. Of course, so much changes in the course of the writing, especially as I get to know my characters better—but the thought of sitting down to a blank page without some sort of road map is terrifying for me.

What’s next for your writing journey?

I’m currently working on a historical series, in which a reformed IRA bomber goes back in time to try to change the course of Irish history. The first book, Bury the Living, takes place in 1923 during the Irish Civil War. The second book, which I’m writing now, is set during the Tudor conquest of Ireland in the late 1500s, featuring the Irish pirate queen Grace O’Malley. 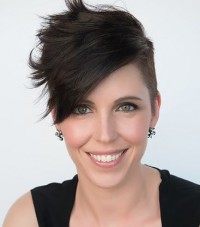 Jodi McIsaac grew up in New Brunswick, Canada. After stints as a short-track speed skater, a speechwriter, and a fundraising and marketing executive in the nonprofit sector, she started a boutique copywriting agency and began writing novels in the wee hours of the morning. She loves running and whiskey and is an avowed geek girl. She lives with her husband and two feisty daughters in Calgary.

To learn more about Jodi, please visit her website.

Latest posts by John A. Connell (see all)
Previous Article