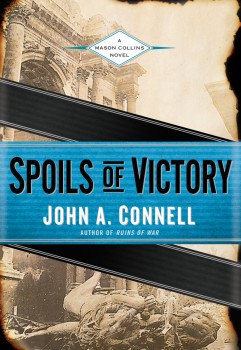 John A. Connell’s debut historical thriller, Ruins of War, introduced us to Mason Collins, a former Chicago homicide detective, U.S. soldier, and prisoner of war- turned-U.S. Army criminal investigator. Now Collins is back in Connell’s latest novel, SPOILS OF VICTORY, which is again set in Germany in the immediate aftermath of World War II.

This time, the action centers on the small town of Garmisch-Partenkirchen, where extortion and corruption are rife and the black market flourishes. Mason’s friend, Counter Intelligence Corps Agent John Winstone, claims that a group of powerful men are taking over the lucrative trade. Winstone is about to share his evidence with Mason when Winstone, along with his girlfriend, is brutally murdered before he can do so. Mason is determined to find those responsible. This is easier said than done in the murky underworld he enters.

His investigation uncovers more deaths—and soon his own life is on the line, too. Mason is not only unsure of who to trust but also aware that some of his past has returned to claw him back to a very dark place. Connell has crafted an intriguing, pacey thriller, and the reader is with Mason every step of the way in trying figure out who is behind the murders.

I really liked Mason as a character and I wondered where Connell drew his inspiration from. “Actually, Mason Collins was a villain in a previous novel, may it rest in peace on my hard drive, but I found him so compelling that I decided to make him my hero in a new novel. This became my first in the Mason Collins series, Ruins of War. Despite Mason’s new status as the protagonist, I wanted him to have the potential to cross over to the dark side, to borrow a well-known phrase, which is only kept in check by a strict moral code. In SPOILS OF VICTORY, the pressure and drive to find the killers drives him close to that dark edge several times.”

As with all the best historical writers, the setting brings an extra life to the novel. Connell has a long-standing passion for history, with a huge interest in World War II since childhood. He more lately came to an era that is less well-known— its aftermath.

Connell says he was staggered by what he found. “Germany had been bombed back to the Middle Ages. Death by famine, disease, and murder had replaced the bullets and bombs. Take Garmisch-Partenkirchen, the setting for SPOILS OF VICTORY: a picturesque town in the Bavarian Alps, with gingerbread houses on Hansel-and-Gretel lanes. But in the first two years after the war, it became the Dodge City of occupied Germany.”

This juxtaposition of chocolate-box cover and mayhem is conveyed so well in the novel and makes it hugely atmospheric. As Connell explains: “When the Third Reich collapsed, Garmisch became the stem of the funnel for fleeing wealthy Germans and Nazi war criminals, the final depository of the Nazis’ stolen art masterpieces. Gold reserves, penicillin, diamonds, uranium from the failed atomic-bomb experiments—all now available for purchase on the black market. With millions of dollars to be made, murder, extortion, bribes, and corruption became the norm. Add to this volatile brew tens of thousands of bored U.S. Army soldiers ripe for temptation, and a typical soldier could barter for almost anything with a single pack of cigarettes. The black market thrived, and gangs of deserted allied soldiers, former POWs, and corrupt displaced persons roamed the countryside. Talk about fertile ground for a crime thriller!”

Fertile ground indeed, but every thriller writer has to do their research and historical writers are up there in terms of a weighty task. Yet it’s work Connell clearly relishes. “For both Ruins of War and SPOILS OF VICTORY, I dug deep into the post-war era, acquiring an array of books, articles, army MP unit histories featuring personal anecdotes, military history doctoral dissertations. I studied historical photographs and maps, anything I could get my hands on. I also turned to the Bavarian State Archives in Munich, which has a treasure trove of information.”

Wartime history of course throws up even higher obstacles. “The most challenging aspect of the research was that during first many months after the war, places and situations changed rapidly, and often enough for there to be conflicting facts or gaps in the records, and some records were lost to time. In fact, the Garmisch-Partenkirchen city archives had little information on its post-war era.” Fortunately, he caught a break. “The archivist knew all about the rampant corruption and crime that went on in Garmisch during those first two years after Nazi Germany’s defeat.”

Not all Connell’s research found its way into the novel, although he found plenty that was tempting. “When the Allied armies were pushing into Germany during the last months of the war, billions of dollars’ worth of Nazi gold and Reichsbank assets were transported to Garmisch-Partenkirchen for safekeeping. And a hefty portion of those assets was never recovered, including millions of dollars worth of the gold. There are legends of a king’s ransom of gold still buried in the surrounding mountains, or lurking at the bottom of Bavarian and Austrian lakes. Then there are accounts of Germans turning over caches of gold, currency, and precious stones to American military officials, who would sign off on the find, load up their trucks, and never be seen again. I touch on this story, but life can be stranger than fiction, and some of the real incidents and characters that cropped up around this time were just too outrageous to be believed!”

Finding that Connell had a successful career as a cameraman came as no surprise. As a reader, I found SPOILS OF VICTORY gripping.  Much of the action leaps off the page. I asked him if his other career influenced his writing. “I visually imagine a scene before I write it. And I’m sure working behind the camera has influenced me in many ways. As a camera operator, framing of a scene is vital: What to reveal and how to reveal it, whether it’s a big wide frame, showing everything, or a close-up of someone’s eyes or hands or feet. When peering through the viewfinder, you forget the lights, the cables, and the crew, and watch the actors and actions like a privileged observer. And that’s exactly how I imagine and construct a scene.”

It’s great to hear that Connell is imagining more. “I’m madly working on book No. 3 in the Mason Collins series. I can’t say much, as Mason’s situation hinges on actions that occur at the end of SPOILS OF VICTORY, so revealing anything about book No. 3 would introduce a big spoiler. I can say that it takes place four months after SPOILS concludes.” And after that? “My plan is to continue the journey with Mason, each book picking up weeks or months after the former, and Mason wandering like an errant knight to some of the most volatile and dangerous places in Europe and the Mediterranean.” I’m sure Mason—and Connell—will have plenty of followers. 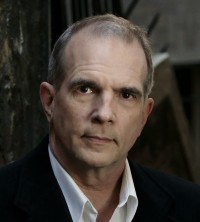 John A. Connell’s previous Mason Collins novel was Ruins of War. He has worked as a cameraman on films such as Jurassic Park and Thelma & Louise and on TV shows including The Practice and NYPD Blue. He lives with his wife in Paris, France.