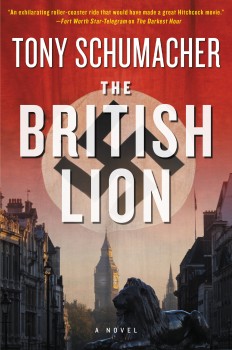 There are all kinds of thrillers and one of the more unusual is an alternate history. Introduced in The Darkest Hour, Tony Schumacher returns to 1946 in his latest thriller, THE BRITISH LION, where the victorious Germans now occupy a defeated Great Britain.

Decorated detective John Henry Rossett is lying in a London hospital room recovering from gunshot wounds. Desperate to avoid blame over the events leading to the shooting, his boss, Ernst Koehler, covers up the incident. But when Koehler’s wife and daughter are kidnapped by American spies, the terrified German turns to the only man he trusts to help him and to do whatever is necessary: John Rossett.

Rossett agrees to save his friend’s daughter, but in the chaotic new world ruled by treachery and betrayal, doing the right thing can get a man killed. Caught between the Nazi SS, the violent British resistance, and Americans with uncertain loyalties, Rossett must secretly make his way out of London and find Ruth Hartz, a Jewish scientist working in Cambridge.

What made you decide to return to German occupied London in THE BRITISH LION?

You sound just like my agent! He was surprised I wanted to return straight away to John Henry Rossett. I’d spent six months talking about how much I was looking forward to trying something different for my next book and spit-balling ideas with him. The crazy thing is in the two months I took off from writing, I started to wonder what had happened to John. I wanted to know how he was doing and whether or not he had managed to save his relationship with Koehler.

I was also missing the world I’d been living in for twelve months. London in 1946 is a crazy place, full of people pushed to the extreme, so I really wanted to go back and experience it again. The great thing about this job is if I want to go back in time and have an adventure with my old friends, I just have to sit down and write it!

How much research did you do?

I read and read and read! Honestly I’ve lost count of the number of books and articles I read on the subject. From that research, I think most importantly, the one thing we need to remember is the world was a very different place from the one we live in today.

The vast majority of Americans were happy for Europe to sort out its own problems. There was a school of thought that said an isolationist American economy would be the dominant benefactor of a post war Europe.

Prior to the war many people foolishly believed that fascism answered a lot of the problems that were hanging over the USA. In the late thirties it appeared that Hitler had put Germany onto the road of full employment and prosperity, and many commentators were recommending it to be model that would serve the USA well. If we throw the renowned anti-Semite Joseph Kennedy into the mix, it is easy to see just how plausible it is that America could have drifted towards a pro-Nazi standpoint.

I’m just glad we’ll never know if it would have succeeded or not.

What was it about John Henry Rossett that you brought him back in THE BRITISH LION?

I like him! I know it sounds trite, but it is true. I know he has done terrible things, truly the worst crimes that can be committed, but he is trying to be better. He is trying to make amends as best as he can. I think that his efforts to be a better man make him someone I can believe in.

He earned my trust in a way.

The friendship between Rossett and Koehler is very deep and unusual to find. Where did you get your inspiration for it?

When I was writing the book I didn’t know it at the time, but Rossett and Koehler’s genuine love for each other is grounded in my relationship with my friend Sweeney. John would die to protect his friend from harm. It is a special kind of friendship, and one he is lucky to have.

I know how he feels.

More than one character in THE BRITISH LION does very unappealing things, yet the characters themselves are likable. How did you accomplish this?

I’ll answer this by telling you a little story from back when I was a cop (I was a British Bobby for ten years before I was homeless and started writing.)

It was New Year’s Eve, I hadn’t been in the job for very long and I was working a night shift. I was young, and right up for all the crazy I could get, so I was devastated when I was told I was going to spend the night babysitting a prisoner in the local hospital.

The guy was a drug addict, and a petty thief who had stabbed his girlfriend, and then been stabbed back after he had lost control of the knife. I’ve got to be honest I wasn’t looking forward to twelve hours of sitting at the end of a drug addict girlfriend stabber’s bed. The thing is though, and I almost hate to admit it … I had a great night.

He was funny, intelligent, and very easy to get along with. At midnight we shook hands and wished each other “happy new year.” At the end of my shift I wished him good luck and never saw him again.

Looking back, all these years later, all I can say is that in real life bad people can be likeable, and if you want your book to be real… you have to remember that.

Was writing THE BRITISH LION harder than writing The Darkest Hour?

I thought it was going to be a nightmare to write to be honest, but it just fell out of me. I think it was so easy because I wanted to see how John was getting on after the trials of the first book. I wanted to help him to be a better man, so I was keen to get to work on setting him on the right road.

I was also eager to see how things were going to work out for him.

What did you like the most about THE BRITISH LION?

Oh wow, this is a hard question! I’d have to say I’m proud that I managed to write three strong female characters. Women who don’t need the men in the book, women who run their own lives. I’m proud of that because when I started I wasn’t sure if I’d be able to do it.

What caused you the most difficulty in writing THE BRITISH LION?

Who is your favorite character in the book and why?

It’s John. He’s part of me now. I love him like a brother. He is very real to me and I care about him.

Since you write at home, what does the area look like?

Although I try to keep my desk tidy it seldom is. As I look around I can see three coffee mugs (I’ll wash them in a minute!), a car repair manual for my old Mercedes, three writing notebooks (I have one for each idea I’m kicking around and I carry them around with me all the time), my phone, my tablet, and my laptop (how much IT does one man need?)

On stands in the corner I have three dusty guitars in various states of poor tuning. I like to pick them up and torture them when looking out the window isn’t inspiration enough for me. I have an old typewriter that I like to use if I’m sending letters. On the far wall I have three old Hank Williams LP Sleeves framed and my framed Wall Street Journal review of The Darkest Hour.

On the wall nearest to me I have a framed front page of the Daily Dispatch from the day that Victory in Europe was declared. It is reassuring to look up at it when my imaginary world becomes a little too real. Next to that is a painting a dear friend did of me and my old dog Boo, who sadly passed away just before The Darkest Hour came out. I dedicated the first book to him, and I still miss him terribly every time I sit down to write.

I’m kicking around two projects at the moment (much to my agents horror!) one is a stand-alone book, and then other is an idea for Rossett. I still haven’t decided which one is going to take to the air next…

What do you hope readers take away from THE BRITISH LION?

A reader emailed me to say that when he finished The Darkest Hour, he took a deep breath, shut the book and said, “Wow.”

If that happens with THE BRITISH LION a few times I will have done my job.

Tony Schumacher is a native of Liverpool, England. He has written for The Guardian and the Huffington Post, and he is a regular contributor to BBC Radio and London’s LBC Radio. He has been a policeman, stand-up comedian, bouncer, jeweler, taxi driver, perfume salesman, actor, and garbage collector, among others. He currently lives outside Liverpool.

To learn more about Tony, please visit his website.