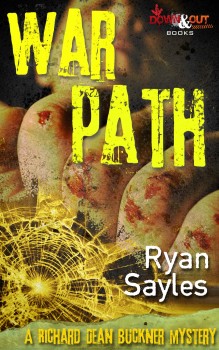 Ryan Sayles has over two dozen short stories in print in anthologies and online, including the Anthony-nominated collection Trouble in the Heartland: Stories inspired by the music of Bruce Springsteen. He is the author of The Subtle Art of Brutality, Goldfinches, That Escalated Quickly! and Disordered Mullets. He is a founding member of Zelmer Pulp.

His upcoming novel, WARPATH, continues The Subtle Art of Brutality series with PI Richard Dean Buckner’s latest case. A real estate mogul is lying about something. His wife’s dead by her own hand, the case has gone cold, and the mogul starts dropping cash into former Saint Ansgar homicide-detective-turned-private-eye Buckner’s wallet to find some answers. Pile on his grandmother’s death in a drive-by shooting and Buckner finds himself at war with the worst gang the city has to offer as well as a slithering rapist who has resurfaced just to tie the loose ends from a twenty-year-old crime. Buckner’s response? People that stupid need to be taught harsh lessons, and vengeance just happens to be one of Buckner’s finer skills.

PI Buckner has a new cold case—and a hot button chase. Tell us something about WARPATH that isn’t in the jacket copy.

Well, this is my first run at an actual sequel for Buckner, so, really the stuff that isn’t in the jacket copy is all the pressure I felt trying to live up to the first book and carry the story forward without simply rehashing the first one. Here Buckner faces harsher consequences to his actions; and of course there’s no drama or tension if he pays with his own blood. While with most cases he steps in and out of other peoples’ lives, in this novel one of his cases revolves around people in his own life. The title “Warpath” describes where Buckner realizes his actions have taken him, and what he will have to do in order to make amends.

Did you plan to write a series when you wrote The Subtle Art of Brutality?

Oh yeah. Actually, The Subtle Art of Brutality wasn’t my first book about Richard Dean Buckner. I originally wrote him into a horror novel. This was in 2006. I read a short story collection called Shadows Over Baker Street edited by Michael Reeves and John Pelan, where they asked their contributors to place Sherlock Holmes and all of his logic into H. P. Lovecraft’s insane world. I had just gotten done reading a novel with a stern, hardboiled voice and thought I should place a character with that hardboiled tone into a similar insane world. That’s where I developed Buckner.

I always had plans to write about him again. I never sat down to write him back to back like I have been, but he’s like an old pair of jeans. It’s very natural to hop back into his life and keep moving forward. He’s never gotten old, either, so I figure why stop?

Your novel seems to feature action and pace. Do you find this emphasis the nature of the genre or perhaps it appeals to today’s shorter attention span?

I try and throw in a spike of action here and there along the novel’s timeline to, if nothing else, break up the exposition. Like darting forward on an otherwise steady walk. I do it because I like action and the thought of writing a strict procedural story, where the crime is unfolded clue by clue, doesn’t appeal to me. I like them, but if it can have a foot chase or shoot out in it, why, that’s even better.

As far as the attention span versus needs of the genre, I think it’s both. We live in a bumper sticker society. All beliefs and opinions boiled down to a single catchy phrase typed big enough to read from a sticker while waiting at a red light. I think it’s crap, and it bugs me to look around and see so many people viewing that as the best way to encompass their deep-seeded beliefs. It comes back to their attention span. Many folks have none. Gone are the days when those huge, classic books could be written and garner the acclaim they did. The Hunchback of Notre Dame had sprawling, page after page descriptions of the architecture. Nowadays that’d be cut in favor of “moving the plot along.” In a lot of ways that has reduced writing to fast food.

But, the genre requires some excitement and ass-kicking. Why do we read? To learn, to escape, to experience things we’d never otherwise experience. Part of that experience is the thrill of being in a foot chase or ducking behind cars as you take fire, waiting for the opportunity to pop up and send a few rounds downrange. Plus, in this context, it’s a safe experience.

Your debut novel The Subtle Art of Brutality was re-released by Down and Out Books, the publisher of your sequel WARPATH. How did that come about?

The original publisher of The Subtle Art of Brutality had a fantastic head of steam as it rolled along through 2012 when they accepted the book. Not too long after that they slowed down and eventually, more or less quit putting out books. I wanted to continue writing Buckner, and had WARPATH ready. I approached Eric Campbell over at Down & Out Books only with WARPATH at first, and he was interested but was hoping to get all the properties so D & O could have a series character. My previous publisher was very gracious and released the rights back to me. From there the transition to D & O was an easy one.

Your protagonist is a former detective turned PI. How much of your background plays into your stories?

I have been in law enforcement, but never like Buckner was. My father was with the police for over thirty years, starting in the 70s. I wrote The Subtle Art of Brutality before I went to a police academy, so I relied on my dad’s experiences for a lot of things. I tuned up the violence and stretched a few things for entertainment’s sake. I wrote WARPATH after having been a cop for a little over a year, and had some of my own stories to shape things. I try and insert my people-watching into the series, or the various truths police have come to know about humanity. It’s true that most people want cops to stop domestic violence, but rarely will they cooperate in prosecuting it.

Do you maintain your network to stay current on investigative methods or is the police procedural elements pushed into the background?

Right now I’m still a cop, so anything I write is being used today in the field. Most of investigations are centered around asking questions. Conversations with a suspect. The skill comes in how to read folks, maneuver around them, choose how to phrase things so it will either draw the truth out of them or put them in a spot where they can be exposed. Knowing when to push and when to gloss over things.

I try to make Buckner very adept at reading people. He solved a lot of things in the first book by knowing he had the right man and then beating him. I’ve tried to keep it gritty in that way for the other books, but I’d also like to change it up some. Having Buckner pummel every last person gets old. I imagine in the future I’ll insert different techniques.

Okay…enough with the business questions! How about some fun stuff?  If you could travel anywhere in the world, all expenses paid, to do onsite research, where would it be?

All expenses paid? Probably the Holy Land. I’d find a way to write a book around all that Biblical history, the different cultures, the sites still preserved. I hear there are extensive tours of all that stuff. That would be fantastic.

What is the best advice—and harshest criticism—you’ve received as an author? What might you say to aspiring writers?

Best advice is write what you love. I’ve tried writing for an agent once and felt so disingenuous that after thirty thousand words of work, I stepped away and felt more satisfied leaving it than I was writing it. It was a story I thought the agent would like, and not something I was so intrigued by that I had to see it to its end. That let me know I needed to write what I love.

Harshest criticism? Meh. When The Subtle Art of Brutality was out through my original publisher, I got a one-star review from someone who obviously had a chip on his shoulder about Buckner’s views on things. I guess that initially bugged me because it was my first experience with a negative review, especially one so venomous. But, as a cop, I’ve had people try to hurt and kill me, so that’s a whole new level of criticism.

As far as my advice to other authors, it boils down to getting a thick skin. Your work of art, impeccable and genius, will be rejected by some, edited until it’s bloody and squealing by others, dumped on by readers, and ignored by still others. But there’s a lot of really supportive people too, and they make it worth it. But seriously, the best thing for any new writer is to get a solid critique. My first true critique was blood red, and after I dried my tears and stopped drinking away my pain, I realized I was being challenged to be a better storyteller. That’s what I want. Be better. If new writers want to be better, they have to be challenged.

I’m working on RDB3 right now. I have a novella called Goldfinches coming out through One Eye Press later this year. It’s a carjacking story where a father is thrown from a vehicle but his wife and child are very purposefully kept inside as the jacker drives off. It becomes a cat-and-mouse thing, and eventually the forces of good and evil make themselves completely apparent. I’m in a writer’s group called Zelmer Pulp. We put out genre fiction issues that read like short story collections. We’ve always got something going on. The next one coming up is about zombies. Should be fun. 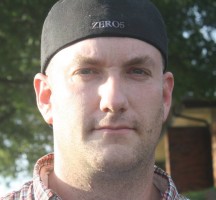 Ryan Sayles has over two dozen short stories in print, anthologies and online, including the Anthony-nominated collection Trouble in the Heartland: stories inspired by the music of Bruce Springsteen. He is the author of The Subtle Art of Brutality, Goldfinches, That Escalated Quickly! and Disordered Mullets. He is a founding member of Zelmer Pulp, prior military and police.