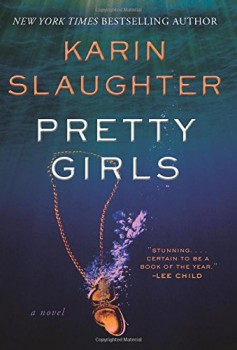 With over 30 million copies of her books sold worldwide, Karin Slaughter clearly knows how to craft an exciting thriller. Yet her new novel, PRETTY GIRLS, is not another installment of her hugely popular Will Trent or Grant County series but a stand-alone. In the weeks leading up to its September 29th release, PRETTY GIRLS generated the level of word-of-mouth writers dream of. The Huffington Post’s headline read: “Slaughter’s PRETTY GIRLS requires a new level of praise,” while Parade magazine proclaimed that the book “lives up to every rave review she’s ever received.”

The novel is written from the points of view of three characters: sisters Claire and Lydia, and their father, Sam. Central to all their lives is the loss of Julia, third sister and eldest daughter who disappeared over two decades previously. While the question of what had happened to Julia is a central driver in the novel, it’s also a novel about the fallout from her disappearance, with the loss and anguish suffered by the family and the gradual destruction of both it as a unit and the individual members within it. While the rest of the world has moved on, the passage of years brings no comfort to Julia’s loved ones, but instead a sharpening of their agony every time a young woman goes missing or the remains of one are reported found.

PRETTY GIRLS is not just a point of view shift, though, but a plunge into human psychology. For The Big Thrill, Slaughter explains what motivated her to write this emotionally challenging novel that deals unflinchingly with the abduction, rape and murder of young women.

PRETTY GIRLS deals so much with the loss and anguish of families who have lost a daughter in this unthinkable way. What was your motivation for wanting to tell this particular story?

For years, I’ve written about crimes from the point of view of the people investigating and trying to solve the crime.  I thought PRETTY GIRLS presented a good opportunity to talk about crime from the perspective of the family and community left behind.  Whenever I start a story, I always remind myself that I am writing about awful things that happen to people every single day (and in the case of sexual assault, almost every minute) so this was my way of exploring how families manage to recover, or if not recover, try to come back, from something unthinkable happening to a loved one.

One of the things I enjoyed the most was how character-driven a novel it is. Where did you draw your inspiration from and did you have a particular favorite?

When I considered the shape of PRETTY GIRLS, and the narrative structure, I envisioned writing a story about how crime tears people apart and sometimes brings them back together.  The two sisters, Claire and Lydia, grew up in the same house.  Each lost their older sister, each lost their parents (in various ways), and they both became very different adults.  I’m the youngest of three sisters, and it has always fascinated me how different we all are, even though we grew up together.  I wanted to explore that dynamic and of course the best way to talk about characters is to put them in a crime novel.  Nothing distils personality better than the threat of danger lurking around the corner.  Looking at it objectively, I probably felt closer to Claire because she’s the youngest.  She does a lot of things that I would do.  Then again, I think Lydia gets some great lines.  Then again (again) if you bring Sam into the mix, I love his letters.  He reminds me a bit of my own father.  I consider him the true heart of the book.

We see a lot of the worlds of Claire and Lydia, which are both fascinating, with very different energies. Both run up against the Everyday Vicious that is so many women- as in the Mothers. Where do you think this vile behavior of some women to other women comes from? 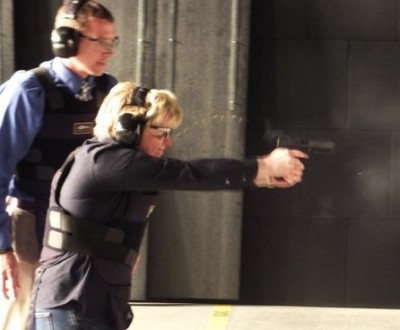 Karin Slaughter, at the firing range to research her novel.

As a theme, I wanted to talk about the fact that women can damage other women, too; sometimes, more meaningfully.  Psychological torture takes longer to heal than a bruise or a cut.  I think Claire’s problem is the same problem she has had all of her life—she’s not drawn to people who will challenge her.  I don’t mean position-wise in the mean girl pyramid, I mean heart-wise.  She’s not going to let herself need someone so much that losing them would cause her grief.  You can tie this to losing Julia or you can say that the loss of Julia amplified this personality trait, but it’s still there.

Writing about Lydia’s world was a little more challenging because it’s so far removed from my own.  Let me preface this by saying one of the great things about women having choices is that they can choose to stay home and raise their kids.  I think that’s a fantastic choice if that’s how you’re wired, but I also think for some women staying at home all day is soul-killing.  They thrive in a competitive working environment, and absent that outlet, they channel all of their competitiveness into their kids, and into competing with other mothers, which is never going to end well.  It’s a no-win situation for everyone involved, though.  The working moms feel like the stay-at-home moms think they are selfish and the stay-at-home moms feel like the working moms think they are lazy and wasting their lives.  I don’t necessarily have a solution to this problem other than to say that women would benefit from being kinder to each other and giving each other understanding rather than condemnation.  Actually, a lot of problems in the world could be solved by these two things.

One issue that worries me the most about stay-at-home moms is that they are not compensated for their work.  They don’t pay into social security.  They don’t have pension funds.  What happens if their husband leaves, or they want to leave, or an illness or catastrophe befalls their families?  As a nation, I think we need to find a way to compensate these women so that they have some security in retirement.

The punishment in law for rape and the issue of the death penalty are discussed from all sides by your characters. Where do you stand on the debate? 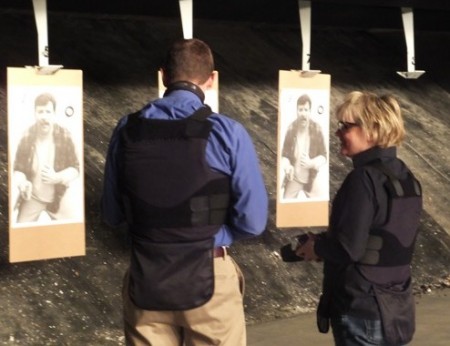 Slaughter: “For years, I’ve written mostly from the cop’s perspective”

I’ve read that around 10 percent of men commit rapes, and they count on silence protecting them—and for the most part, it does. The majority of women don’t come forward because they are afraid of the system.  They’ve heard horror stories (or seen them unfold on TV) about women who accuse men of rape and have their lives completely destroyed.  Changing our attitudes about rape and rapists would go such a long way toward making women feel safe.  I mean, if I handed you a bowl of chocolates and said that only 10 percent of them were filled with rat poison, would you take one?

Rape is the only crime where cops ask the victim if they want to press charges.  Can you imagine if your car is stolen and the police don’t say, “Do you want us to try to find out who did it, and if we find out who did it, do you really want to go to court?”  Or even worse, “You probably shouldn’t file a report because people will just ask you why you parked your car there and they’ll find out that you got into an accident with your last car and you don’t want to have to go through that kind of scrutiny.”

As for the death penalty, I am the typical American in that I agree with it so long as there is no question of guilt.  The thing is, with rare exception, there are always questions.  Is a lifetime in solitary confinement any better than the death penalty?  Men—and it is mostly men, and typically impoverished men and men of color—go insane living in those conditions.  Is that humane?  I think our justice system has a lot to answer for.

There is a plot strand in the book that involves the rape and killing for women for sexual gratification that is pre-internet. But we can see examples in history where this horrific end has been inflicted on women. Do you think that such depraved desires have always existed? Do you have a view on where such desires come from?

I think depravity has always existed. One need only read the classics.  Or look at the history of warfare.  Or the photos from Abu Ghraib.  If I had to theorize, I might say that the desire to see these things, and participate in them, comes from nature.  Some people are wired differently, and they are titillated by the extreme.  This exists in all areas of life.  Some people go skiing, and some people jump out of a helicopter with a snowboard and a prayer.  Some people read romance and some read erotica.  And the basic drive for just about every serial killer who has ever been caught has been sexual gratification brought on by controlling the victim. 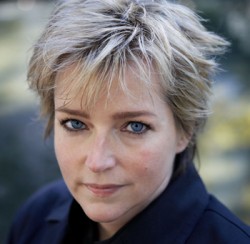 Mother to the three girls is Helen, a retired librarian. You are of course a huge supporter of the Save the Libraries campaign. What do you think a world without libraries would be like?

I can’t imagine a world without libraries.  What would that look like?  It’s too terrible to even contemplate.  Without free and open access to books and reading, we might as well just close up shop and stay home.  Save the Libraries is a charitable trust I started to help raise money and awareness for libraries.  I’m also encouraging all the authors I know to adopt their local library and do whatever they can to help.  I can’t think of any author friends who didn’t get their start at the library.  Reading is what made us want to be writers.  To deny other people that pleasure isn’t just mean, it’s un-American.

And what of the next Karin Slaughter novel—can your readers expect another stand-alone or a return to one of your series?

I am working on the next book right now.  It’s called The Kept Woman and features Will Trent, Sara Linton and the rest of the gang.  I think people are going to be very happy with the story.