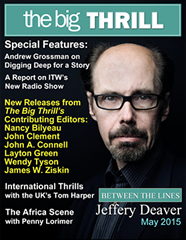 Read the stories that were featured in the May edition of The Big Thrill.

We have another exciting line up this month in The Big Thrill.

First up, a Between the Lines interview with the remarkable Jeffery Deaver. The #1 bestselling author talks about his long career, his innovative projects, and, of course, his amazing new thriller, Solitude Creek.

But what also makes this month special is that we’re celebrating the new releases of some of our own: the Contributing Editors. You may not know that most of the articles in The Big Thrill are written by writers who donate their time to support their ITW peers. This month several members of our team have new releases—so we hope you’ll return the support and buy their books:

There’s Nancy Bilyeau, who delivers another winner with The Tapestry, the third in her award-winning Joanna Stafford series set during the Tudor era.

John Clement is back with his cozy-fan-favorite Dixie Hemingway mystery series with The Cat Sitter’s Whiskers.

Let’s not forgot about hot debut author John A. Connell and Ruins of War, a thrilling tale set in Post WWII Germany where a predator is prowling the lawless streets of Munich.

Our International Thrills correspondent Layton Green, on the heels of his nomination for a 2015 Thriller Award, brings readers another explosive Dominic Grey story in The Shadow Cartel.

And third time is the charm for Wendy Tyson who returns with Dying Brand, book three in her haunting Allison Campbell mystery series.

Finally, don’t forget to check out the Specials, the Africa Scene, this month’s International Thrills, and many more hot new releases from ITW members.

Here’s what’s in store for May!

May 4 – 10: “What are the considerations when adopting a title for a series?”
May 11 – 17: “What are the best bands for writing thrillers? Or does haunting classical music work best? ”
May 18 – 24: “People imagine the publishing world to be one of camaraderie. But is that naïve? How intense is the plotting and vindictiveness of some houses – no names!”
May 25 – 31: “Have you used the American Psychological Association’s DSM V – or previous versions of the Diagnostic and Statistic Manuel of Mental Disorders – to help develop characters?”

Congratulations to Lori Beyer, the winner of this month’s BIG THRILL giveaway. Lori will receive an assortment of signed thrillers including Manhunt by Tyler Anne Snell, The Boy Who Knew Too Much by Jeffrey Westhoff, Caffeine Can Kill by Bob Doerr, Ruins of War by John A. Connell, Broken by Cynthia Eden, No Doves by Andy Boot, You Will Never Find Me by Robert Wilson, Astonishing Heroes: Shades of Justice by Gary Phillips, Never Smile at Strangers by Jennifer Jaynes, Ugly Young Thing by Jennifer Jaynes, A Good Killing by Allison Leotta, and Losing Faith by Adam Mitzner.