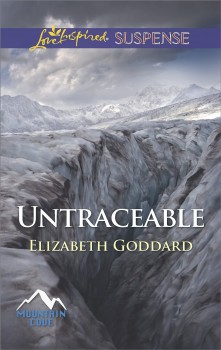 Readers of romantic suspense, UNTRACEABLE may be for you:

On a daring mission, search and rescue specialist Heidi Warren and her team step onto an icy Alaskan mountaintop—and right into a trap. A stranded gang of thieves holds them at gunpoint, forcing them to serve as guides along the treacherous path. Menaced on all sides by dangerous weather, deadly terrain, and murderous criminals, Heidi desperately needs someone to trust. But her rescue partner Isaiah Callahan is keeping secrets from her. Secrets that ended their chance at a relationship before it could even begin. Yet her survival depends on finding a way to trust Isaiah when a blizzard starts closing in and her options start running out.

UNTRACEABLE is the second book in the Mountain Cove series penned by award-winning author Elizabeth Goddard.

Goddard used a newspaper article that recounted the experience of a man who spent fifteen days in a blizzard, thirteen of which were “a consecutive and virtually relentless hurricane” on the Juneau Ice field as the basis for her research for UNTRACEABLE.

What was most problematic with UNTRACEABLE?

UNTRACEABLE was a different kind of story because I let the reader know in the first chapter who the bad guy is. The characters know too, so there is no whodunit. There is no mystery to solve. The struggle and the suspense come from trying to survive the villains and the brutality of nature in the mountains of the Coast Range in Alaska—said to be the most inclement weather on the planet. So the writing process was difficult in that I had to think of new and fresh ways in each chapter for them to deal with the same problems. Frankly I was worried that readers wouldn’t like this story, but the opposite has been true. Many have said they loved it more than Buried, the first novel in the series, my personal favorite.

Who came first in UNTRACEABLE, Heidi or Isaiah?

Heidi Warren is one of the Warren siblings and an important part of the series, and Isaiah was there in that first story, Buried, as well. For me, I always know the male characters better, so Isaiah was more developed in my head and heart as I started the story.

You said UNTRACEABLE was not a fun book to write and was brutal, in what way?

UNTRACEABLE was a brutal story because it was not only man-vs-man but man-vs-nature, and personally I was going through a huge struggle in my own life. So I threw all my personal anguish into the characters and their struggles with each other and with nature.

How much of the story did you know before beginning UNTRACEABLE?

When I sent a proposal in to my editor, it includes a full synopsis and three chapters of the first story in the proposal. I had only written a one page general synopsis for UNTRACEABLE. Then with LIS, before I can start writing the next story in the proposal, my editor must approve a full synopsis and three chapters. So I took the one page and expanded that to a full synopsis—sometimes that means ten pages, sometimes fifteen. I know the story before I begin writing. That said, I often take detours along the way, as one might do when driving from one destination to another.

What led you to believe Mountain Cove would be a series?

Readers love reading series. They look forward to reading that next book that will portray another character’s story and romance. There was never any doubt that Mountain Cove would be a series about mountain search and rescue volunteers. SAR heroes. I sold four books for the series and I have a proposal in for two more. Honestly, I could keep writing on this series for a long time.

You are very prolific. Do you work on more than one novel at a time?

Yes, I’ve written more than just one novel at a time. I’ve written for two separate publishers and lines at the same time. I write the rough draft of one book, then go to the next, then come back to polish that first one, and on it goes. Often the editing process takes me much longer than writing the first draft. If you write one thousand words a day, you can complete a Love Inspired Suspense novel in two months. I like to give myself three months, which includes polishing. However, from conception to completed novel takes much longer. I often have many different novel ideas simmering and it might be months or years before I see that idea fleshed out in a novel.

Besides books three and four in the Mountain Cove series, what else are you working on?

I just completed edits for book four in Mountain Cove. I’m currently working on book five, hoping my editor will buy it. I’m also developing a romantic suspense trade novel to send to my agent, and working on putting up my backlist of books, for which I now have the rights, onto various e-book venues.

I read you recently moved to Minneapolis. How do you stay organized as a writer?

I live by that old Nike slogan: Just Do It! That said, staying organized isn’t easy, especially since I home school my children. But I keep a to-do list at hand, and scratch things off the list. That’s the only thing keeping me sane!

What would you like readers of The Big Thrill to know about you?

I love writing adventurous and suspenseful romance. If you enjoy reading the same, you can find out more about me at my website. Please sign up for my newsletter to get the latest book news! 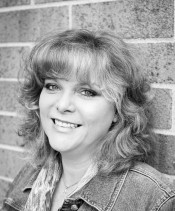 Elizabeth Goddard is the bestselling, award-winning author of more than twenty-three romance novels. A 7th generation Texan, Elizabeth graduated with a B.S. degree in computer science and worked in high-level software sales for several years before retiring to home school her children and fulfill her dream of becoming an author. She currently lives in Minnesota where she assists her husband in ministry.