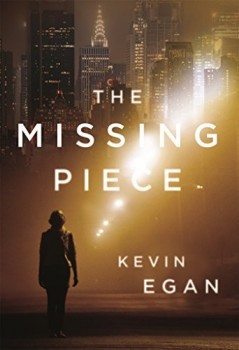 When you read THE MISSING PIECE, I want you to imagine that you are Gary Martin, a court officer assigned to the New York County Courthouse. You are part of a security team in a civil trial with legal representatives from Croatia and Hungary vying for the ownership of the Salvus Treasure, a $70 million dollar hoard of ancient Roman silver. Suddenly, gunmen burst into the courtroom, shoot you, and flee with one piece of the treasure, a silver urn. A mistrial is declared, but that is not the end of the case.

Much changes over the next three years. As a result of the shooting you are in a wheelchair, paralyzed from the waist down. A new judge has inherited the case, and the trial resumes in a different courtroom. What has not changed is that you are still convinced that the thieves hid the missing urn in the courthouse. Is it still there? Will the thieves return to claim it?

Kevin Egan is the author of six previous novels, including Midnight, a Kirkus Best Book of 2013. He works in the iconic New York County Courthouse, which serves as the setting and inspiration for THE MISSING PIECE. His short fiction has appeared in Alfred Hitchcock Mystery Magazine, Rosebud, and The Westchester Review. He graduated with a B.A. in English from Cornell University.

THE MISSING PIECE is Kevin Egan’s seventh novel and as this thriller plays out he will give his readers an inside view of the legal system, as well as the extralegal system, at play in New York City’s courtrooms.

When did you first become interested in writing novels?

When I was eight years old I watched The Day the Earth Stood Still on television and wished that I had written the story. (I also memorized “Klaatu barada nikto” in case I ever encountered Gort.) My earliest attempts to write fiction trailed off into nothing, but by college I was finishing stories and submitting them to magazines. Nothing happened. I tried writing novels during the latter part of college and during law school. I didn’t finish any of them. Then I literally made and kept a New Year’s resolution to write a novel in a year. That novel became The Perseus Breed.

What did you do before you became an attorney? A writer?

I went directly from college to law school, so all my full-time adult jobs have been law related and have involved substantial writing. I worked as an editor for a legal publishing company, where I wrote income tax manuals, then as a law clerk for two judges, where I drafted literally thousands of decisions. Prior to my legal career, I worked ten consecutive summers (from eighth grade almost to the end of law school) at a golf course.

What did I do before I became a writer? I was someone who wanted to become a writer.

Did your career(s) help in developing plots and characters?

My careers have helped enormously because most of my writing is derived from places where I have worked. My four golf mystery novels came directly from my ten summers working on a golf course. My two courthouse thrillers, The Missing Piece and Midnight, are set in the New York County Courthouse, where I have worked for over twenty years. A courthouse might seem like a natural supply house for endless stories, but drawing fiction from a place where I still work proved much more difficult than drawing fiction from summer memories that had been refined by the passage of time. Plus, the procedural intricacies and the internal language of a courthouse do not translate well into drama. I struggled with finding my “way into” my own brand of courthouse fiction for a long time because the writing bogged down in the trivial details of the day-to-day courthouse experience. Then, accidentally, I found my “way into” portraying the courthouse in fiction by writing short stories.

The first version of Midnight was a meandering and unfocused novel. After letting it lie fallow for over a year, I decided to reimagine it as a short story. The premise, and this is actual fact, is that when a state court judge dies, the judge’s staff keep their jobs until the end of that year. So in the short story, unlike in the first version of the novel, the judge dies in chambers on New Year’s Eve. Mix in a bad economy, a law clerk with a gambling debt, and a secretary who is a single mother, and you have two people desperate enough to embark on the temptingly simple plan to make it look like the judge died just a few hours later on New Year’s Day. Once I finished the short story, I knew I had the blueprint for a better novel. Midnight is perhaps the only thriller based on an administrative regulation.

What prompted you to write THE MISSING PIECE?

The trial that starts the book is loosely based on a real case, though no gunmen burst into that courtroom and no silver urn was produced as an exhibit. But the trial is not the point of the book. As the Booklist review points out, it’s the MacGuffin that sets the main action of the book in motion.

Tell me about the characters in your new novel, THE MISSING PIECE, and how you came to create them?

Since both THE MISSING PIECE and Midnight are set in a real place, the tendency may be to assume that the characters are based on real people. Not so with me. I believe that characters, especially major characters, need to be created from fiction, not imported from life.

Several years ago, when the early versions of both courthouse novels were in tatters, I started writing short stories set in the courthouse. The people who work in a courthouse have clearly defined roles—court officer, court reporter, law clerk, judge. My stories, which are character-driven rather than plot-driven, not only examine but also blend and blur these roles. As it turns out, the stories also function as a way for me to audition characters who may appear in longer works.

You have written a series of novels before Midnight and THE MISSING PIECE. Tell us a little about them. Do you plan to write another series?

My Kieran Lenahan series and my (unintentional) stand-alone, Where It Lies, were golf mysteries. That sub-genre enjoyed some popularity from the mid-90s to the early 2000s. The Kieran Lenahan series featured a lawyer who quit the practice of law to become a golf pro. Bouncing between the professional tour and a sedate country club job, he cannot shake the problems that bedeviled his legal career. In Local Knowledge, a dead client’s testamentary request that Kieran auction a set of rare German golf clubs enmeshes him in a murderous conspiracy with roots in World War II.

Where It Lies featured Jenny Chase. This was my first attempt to create a female main character for a novel. I thought she would be a female version of Kieran Lenahan, but she turned out to be a far more interesting and complex character.

I have a finished manuscript that I adapted from what would have been the follow-up to Where It Lies. It is now a non-golf related cozy, but I have not done anything with it as yet. Actually, THE MISSING PIECE, and its predecessor, Midnight, are a series. The link is not so much a main character as it is the New York County Courthouse, which is well known throughout the country from the opening credits of Law & Order.

Most authors find the writing process very time consuming and lengthy. What is your typical writing day like? Do you have a favorite time and place to write, and if so, why?

During the workweek, my usual writing day consists of three short sessions: commuter train ride to my day job, lunch hour, and commuter train ride home. Weekends I tend to get up early and write for about two hours. Mornings are my favorite time to write, especially while working on the first draft of a novel, and my favorite place is on the train. Even with the prevalence of cell phones, rush hour trains tend to be quiet, and I’ve conditioned myself to lock into what I’m doing as soon as I sit down. Six of my seven novels were written largely on the train.

Now that you’ve published your seventh novel, what advice would you share with beginning writers?

It may sound trite, but my advice is to keep writing, submit your work, and never give up. Many people who declare they want to be a writer will never finish anything. You need to put words on paper, not talk about writing or plan to write or think about writing. Finish something. Once you finish a story, send it out into the world, whether it is to your spouse, a trusted friend, or a magazine editor. The point is that another pair of eyes validates the fact that you have written something. Once you start submitting your work for publication, keep submitting. Don’t let rejection get you down. It happens to everyone. Never give up.

What’s next for Kevin Egan?

I am working on a third courthouse thriller and, when I find the time, batting out more short stories. 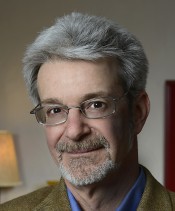 Kevin Egan is the author of seven novels, including his forthcoming The Missing Piece and Midnight, a Kirkus Best Book of 2013. He works in the iconic New York County Courthouse, which serves as the setting and inspiration for The Missing Piece. His short fiction has appeared in Alfred Hitchcock Mystery Magazine, Rosebud, and The Westchester Review. He graduated with a B.A. in English from Cornell University.

For more information about Kevin Egan and The Missing Piece, visit his website.