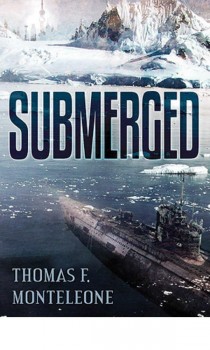 Thomas F. Monteleone is a writer who has not been wasting his time. Thomas has published more than 100 short stories, 5 collections, 7 anthologies and 27 novels including the bestseller, New York Times Notable Book of the Year, The Blood of the Lamb. A four-time winner of the Bram Stoker Award, he’s also written scripts for stage, screen and TV, as well as the bestselling The Complete Idiot’s Guide to Writing a Novel (now in a 2nd edition) which sits on the bookshelf of this reviewer. His latest novel is a global thriller, SUBMERGED, and I must say I found myself Immersed in Submerged.

He lives in Maryland with his wife, Elizabeth, and all the high taxes. He is also co-editor of the award-winning anthology series of imaginative fiction, Borderlands. He is well-known as a great reader of his own work, and routinely draws SRO at conventions. Despite being dragged kicking and screaming into his sixties and losing most of his hair, he is still in many circles considered to be one who thinks he is dashingly handsome—let’s humor him.

Thomas, tell us about SUBMERGED.

It’s a thriller in the tradition of the best Ken Follett novels that use recent historical events that somehow still have great influence on us today. Having always had an abiding interest in World War II, and especially the astounding technologies of the German war machine, I have admired the novels of Frederick Forsyth and Greg Iles and Jack Higgins. I Like the challenge of using historical facts to make fiction ring true with credibility. So what if . . . . the Kriegsmarine had launched a super-sub—and underwater aircraft carrier with the ability to launch a bomber over the USA?

Where did the idea for this storyline come from?

Years back, I saw a documentary on PBS (and that in itself is weird because I never watch PBS) about “Hitler’s Lost Sub” or some such title, and it went on about how some divers had found a U-boat that defied identification.  An okay story, but I didn’t find it brimming over with interest. But it got me thinking about what it would  be like if the sub had been some kind of Nazi superweapon or if it contained something beyond imagining? I extrapolated from there a few more layers of complexity and technology and the story came together.

What kind of research did you do for SUBMERGED?

More than I wanted to. After 27 novels, I’ve learned you always learn way more from your research than you can ever insert into your novel, but SUBMERGED required that I learn the ins and outs of the German U-boat service, as well as the backstories of all the Nazi “wonder weapons” and also all the details of scuba diving and its subculture of “wreck-diving.” The research took a good 6 to 8 months of work before I even started telling my story.

Can you describe your writing process? Do you have a certain formulaic system you follow or do you fly by the seat of your pants?

I’ve never been one of these writers who constructs a huge and detailed outline before getting started. I usually have what I call my “high concept” . . . . my big idea that’s going to fuel the plot-engine, and then I figure what kind of characters I’ll need and who they are going to be, and then I lay awake at night and wait until my subconscious strings together enough story elements so that I know where I want to end up in the narrative—my resolution.  That gives me a general idea of what gets my story going and where it will end up.  But that’s all I want to know when I start a new book.  The fun for me is in the telling as I tell the story to myself. I guess I kind of entertain myself as I invent ways to make the story move. If this is a formula, it’s not one I would recommend to anyone. It’s something that evolved over many years and it came from the process of writing genre short stories for magazines and anthologies. I’ve published more than a hundred stories and it was a rare moment indeed when I ever had a clue how any of them would turn out. That was the challenge—the fun of being a writer.

You’ve written across a wide spectrum of genres from Horror, to Sci-Fi, to Thrillers and Non-Fiction. Short and Long formats. Anthologies, Novellas and Novels. What, if any, among these various formats would you call your favourite?

That’s a tough one. I’ve always believed my favorite type of writing was whatever was firing the creative furnace in the heat of the moment.  I enjoyed the challenge of SF because the sin of Unoriginality is death itself; I’ve liked horror and dark suspense because I like the unanswerable questions those genres are always asking: what makes us evil? Who are we? And where are we going?  Stuff like that. I like non-fiction because it allows me to write in my own voice and my own personality. I like screenplays because of the challenge of writing with pace and economy. But believe it or not, I think my personal favorite is writing a dark fantasy novelette or short story. I think it’s the hardest thing to do well—and when you can pull it off, it’s a roundhouse punch to the aesthetic bread-basket.

Do you feel like you have a major-big story still lurking under the surface, stalking your mind, waiting to be released?

As writers, if we didn’t all believe that, it’d be a pretty dull task we faced each day, no?  Of COURSE I’ve got ideas percolating that should blow the doors off most reader’s and editor’s notions of a good story.  But there is no way I’m sharing them with the likes of you!

If you could choose any era other than this to live in what would it be.

I’m not sure I’d want to “live” there, but I’d give anything to see what the earth was like When Dinosaurs Ruled the Earth (!)  As far as eras of human history . . . . no, I like my electricity and cybertech and sanitation, thank you.

What do you think about the recent changes in the writing world, with ebooks, audiobooks, more indie writers popping up?

For quite a while, I didn’t downplay or denigrate eBooks or audio or online publishing as much as I didn’t really think about it. When some of my writer friends starting converting the out-of-print backlists into eBooks and audio, and they were telling me there was a good income stream to be had, I started to wake up from the luddite snooze into which I’d fallen. I think the new technologies offer us a way to stay “in print” indefinitely . . . and therefore always accessible to anyone searching out a good storyteller. I am still in the process of getting my backlist of 40+ books into eBook and audio format. It’s a big years-long project to do right.  As far a new writer publishing their stories and books on the internet without going through the traditional vetting process of gathering hundreds of rejection slips and finally finding an editor who guides you into the pro world . . . . well, I’m sorry if I sound like Old School, but my first notion would be that most of what is published online without editorial and remunerative constraints is probably crap of the First Order of Crap.

And now we come to the point where I like to ask a question that allows the reader to peer deep into the soul of the author and catch a glimpse of the secret person behind the veneer of the book cover. You are walking along a country lane in the spring, quietly considering your next book when suddenly there appears before you a being shimmering in light and wearing a long white robe. He’s got pointy ears and big fancy-dancy walking stick. Beside him is a Leprechaun looking bloke who stares disconcertingly at you for a moment, then smiles in a way that at once makes you feel good and makes you put your hand on your wallet.

The little man says, “Mr. Gorbwold the Mighty Wizard Outside of Space and Time here grants you three wishes, anything of your choice, as long as they fit into these categories:

Oh, wait, that’s four. So four wishes then, from Mr. Gorbwold the Mighty Wizard Outside of Space and Time is what you get. Clock is ticking mate.”

How would you answer?

Thomas F. Monteleone has published more than 100 short stories, 5 collections, 7 anthologies and 27 novels including the bestseller, New York Times Notable Book of the Year, The Blood of the Lamb. A four-time winner of the Bram Stoker Award, he’s also written scripts for stage, screen and TV, as well as the bestselling The Complete Idiot’s Guide to Writing a Novel (now in a 2nd edition). His latest novel is a global thriller, Submerged. He lives in Maryland with his wife, Elizabeth, and all the high taxes. He is also co-editor of the award-winning anthology series of imaginative fiction, Borderlands. He is well-known as a great reader of his work, and routinely draws SRO at conventions. Despite being dragged kicking and screaming into his sixties and losing most of his hair, he still thinks he is dashingly handsome—humor him.