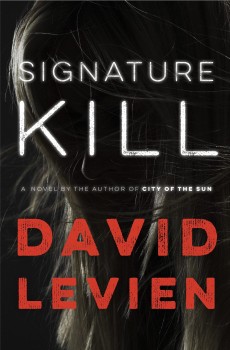 David Levien has a reputation for exhaustive research in order to authenticate his fiction.

“Wouldn’t it be off the charts insane if I admitted to becoming a serial killer in the name of research? Well, I didn’t do that. I did read dozens of biographies, case histories, non-fiction and clinical books on killers of all different types. I also spoke pretty extensively with a couple criminal psychiatrists. The process took a few years,” said Levien.

In SIGNATURE KILL, Behr takes on a cold case to find a woman whose face is plastered all over billboards throughout Indianapolis and collect the $100,000 reward. At the same time, bodies of murdered women start piling up and before too long, Behr realizes his cold case is connected to these brutal murders and a serial killer is on the loose. However, this man has the ability to blend in with polite society, which makes tracking him down difficult, forcing Behr to go to dark places.

“I’m highly interested in the iteration of evil that walks the streets amongst us, unrecognized. Certain real-life killers like Dennis Rader, John Wayne Gacy, Jeffrey Dahmer, going all the way back to Albert Fish and H.H. Holmes—these people led quiet, normal lives, for all intents and purposes, but their real existences were far from quiet or normal. The ‘regular’ way this type of killer conducts himself makes him extremely difficult to discover and stop,” said Levien. “It would take someone, I posit, singular of purpose, with extreme determination, toughness, and ingenuity—like Behr—on a sort of quest, to hook into the mind and actions of a killer like this.”

“When I was in the thick of it, researching and writing for many hours a day, the work became a very dark place. I felt a deep sense of disquiet. I wouldn’t say I had nightmares, but my dreams became infected by graphic imagery and a sense of heavy foreboding. I stayed in there for a long time, and when the book was finally written, it was a relief to no longer have an excavation of the mind of a depraved killer on my to-do list.”

He also talked about why the Behr books occur in Indianapolis.

“It was important in [City of the Sun, the first Behr novel] that the central crime—the abduction of a young boy—happen in a bucolic place where that kind of thing is not expected. For that reason, I knew it needed to be in the Midwest. But I had this feeling that if the thing somehow turned into a series, the setting needed to also be big enough and crime-y enough so my character could keep encountering new crimes and cases,” explained Levien. “I went to school at the University of Michigan and took a lot of road-trips back then, so I knew Indianapolis a bit—it’s very All-American, but it’s also a large city with pockets of heavy crime and a high murder rate in certain sections. I also wasn’t aware of any series being set there, which was a plus for me. It just fit for that first book, so that became home to Frank Behr and the series.”

Levien’s stepfather was a police officer, Secret Service agent, and a private investigator, which gave him an inside view of what those law enforcement professions were like when he created Behr, who’s nothing like his stepfather.

“Behr is a fictional construct,” he said. “His career as a cop and the tragic incident that marks him, his dogged, methodical style, his willingness to use violence, his way of talking, of physical training, his array of contacts—all that stuff is created. He’s a big brooding guy, not too talky, with skills, and a very personal sense of code and penance for his past failures.”

According to Levien, the Behr books can be read out of sequence or as standalones. Of course, the series is intended to be read in order.

“Aspects of Behr’s personal life and his growth and evolution as a character, and the way each case he’s involved in mark and change him, are best understood when the books are read chronologically. But I’m aware that readers encounter series and individual books in varying ways, so I built it so that there’s no necessity to go in order. There is a bit of description and introduction to Behr and what makes him who he is in each book, so someone new to the series who starts with SIGNATURE KILL or the second or third book will not be lost. They’re all complete stories,” he said. “The books don’t compete with each other, but you want to feel like there’s a growth in the books and as a storyteller. I hope each one is better than the last in at least some small way—idea, writing, passion—if not altogether better.”

Levien can’t see any of his Behr books being adapted for the movies.

But he can see them as a premium cable series.

“Each book set up for a season, and the episodic space allows for more character excavation and time for investigative and narrative twists and turns,” said Levien.

As for who’d play Behr, he said, “Someone big and intense who’s a hell of an actor.” 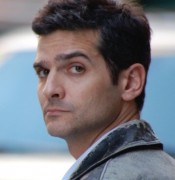 David Levien is the author of the Frank Behr novels: Thirteen Million Dollar Pop, Where the Dead Lay, and City of the Sun. He has been nominated for the Edgar, Hammett, and Shamus Awards, and he is also a screenwriter (Rounders, Runaway Jury, Ocean’s 13) and director (Knockaround Guys, Solitary Man). He lives in Connecticut