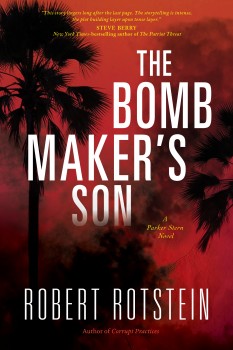 Lawyer-cum-novelist Robert Rotstein was a member of the first generation that grew up watching television—he preferred legal dramas—which cemented his career path.

“At an early age, I became hooked on legal dramas—certainly Perry Mason, which was more mystery than legal drama, but also on more serious shows like The Defenders and lesser known shows like Judd for the Defense, The Young Lawyers, and The Trials of O’Brien—lawyers doing justice. Television then, as the multiple forms of media now, can definitely influence the impressionable young mind,” said Rotstein, author of THE BOMB MAKER’S SON, the latest novel in his Parker Stern series.

Further, Rotstein grew up in Culver City, CA, which was then the home of MGM Studios (now Sony Pictures) and the town he considers the TRUE Hollywood.

“The city’s motto is ‘The Heart of Screenland.’ Sometimes I think I learned to write fiction by civic osmosis!” he quipped.

“(It’s) been in existence for one-hundred-eight years and—no—I wasn’t there at the beginning,” Rotstein said, tongue-in-cheek.

“I almost hesitate to say it, because it sounds so ‘establishment,’ but I’ve learned to appreciate how truly creative and talented people in their positions are. Their work ethic and desire to get it right can serve as an example to aspiring writers. And they don’t take kindly to getting sued for copyright infringement,” he said.

Rotstein always desired to write novels, but his job and family prevented that, along with the all too common trepidation that he wouldn’t be able to succeed. However, he befriended an expert witness in a lawsuit who was also a writing teacher. This person asked to see some of his work, was impressed with what she saw, and asked him to keep going.

“So, my law practice was, in the end, responsible for my becoming a novelist,” he said.

“Parker started out as one of the country’s top trial lawyers under forty—a young attorney in a hurry. In real life, I’ve known of several attorneys who very early in their careers achieved success but who then hit a roadblock. In Parker’s case, that roadblock was the violent death of his mentor, an event that so traumatized Parker that he became afflicted with severe stage fright that inhibits his ability to speak in a courtroom. My books chronicle Parker’s quest to overcome his fear,” explained Rotstein.

In THE BOMB MAKER’S SON, Parker’s estranged mother, who happens to be the enigmatic leader of the cultish Church of the Sanctified Assembly that was introduced in Corrupt Practices, asks him to represent Ian Holzner, alias the Playa Delta Bomber. In 1975, Holzner planted a bomb that resulted in the deaths of four people. He’s been on the lam ever since. His re-emergence opens old wounds and brings a new round of violence.

“I grew up during the Vietnam War era, where protest and violence seemed ubiquitous in this country. Several of my school classmates became radicalized, and one was even tried (and later acquitted) for aiding and abetting a terrorist act,” explained Rotstein. “I was also fascinated by news reports about long-time fugitives who were either arrested or who voluntarily surrendered to authorities. Finally, certain questions about Parker Stern’s own past went unanswered in the first two novels. I combined the above concerns with an exploration of present day terrorism and came up with THE BOMB MAKER’S SON.”

Rotstein says his novels are conspiracy thrillers as well as legal thrillers that have a touch of “L.A. noir” in them, making them stand out from other legal thrillers on the market today. He next talked about how he conceived the Church of the Sanctified Assembly.

“I researched a number of different groups and religions, some current, others going back centuries, and then in the writing process combined that information, along with my imagination, to come up with the Sanctified Assembly. As an L.A. native, I’ve always been interested in the seemingly indigenous Southern California religious movements, many of which seem to be part of Hollywood culture,” explained Rotstein. “For many years, I’d been fascinated with the story of L.A. faith-healing evangelist Aimee Semple McPherson, who in the 1920s and 1930s, built the Angelus Temple. McPherson pioneered the use of the media to spread her gospel, became a Hollywood star, and might have staged her own kidnapping to cover up plastic surgery, an abortion—or maybe just for publicity. Her story helped inspire the starlet’s disappearance in Reckless Disregard.”

Currently, Rotstein is hard at work on his fourth novel. Even though it doesn’t feature Parker, it’s a legal thriller about “Big Law”— the huge international law firms that have essentially become corporations.

“The novel will, with humor—at least I hope there’s humor!— explore how the competitive culture of such firms affects the lives of young associates,” he said. “The best part of writing any novel is the ability to create a new world. Not many adults get to do that.” 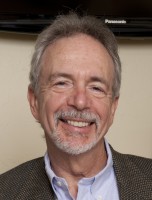 Robert Rotstein (Los Angeles, CA), an entertainment attorney with over thirty years’ experience in the industry, is the author of CORRUPT PRACTICES and RECKLESS DISREGARD, the first and second Parker Stern novels. He’s represented all of the major motion picture studios and many well-known writers, producers, directors, and musicians. He lives with his family in Los Angeles, California, where he is at work on the next Parker Stern novel.