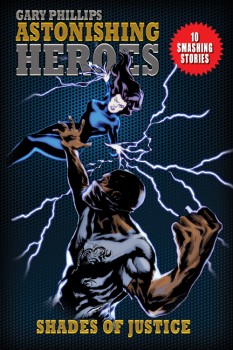 As the special effects-laden Avengers: Age of Ultron racked up box office receipts worldwide, continuing the dominance in the superhero movie genre that Marvel has enjoyed for some time, let’s take a couple of step backs from costumed do-gooders—and I’m including you in those torn Dockers of yours, Hulk—battling super-strength robots tearing up our cities. Rather, let’s talk about some other more down to earth heroes from the past and re-booted present.

First, there’s the recently-released thirteen “TV” episodes of Daredevil, another Marvel character, on Netflix. In this new version, DD is updated—created by writer Stan Lee and artist Bill Everett, who premiered in his own comics magazine in 1963—and his arc is not one of fighting super-villains, but racketeers. The look and mood is a dark, brooding Hell’s Kitchen (not the gentrifying one of reality), blending hardboiled and noirish elements with a smattering of eastern mysticism.

This Daredevil gets the crap beat out of him, engages in close hand-to-hand combat combining martial arts and Western boxing styles, amasses clues to unmask his opponents, and even gets a bladed hook embedded in his side by a ninja and dragged along thusly for his troubles. He’s a street level vigilante fighting to stop the head of a criminal empire, Wilson Fisk, a/k/a The Kingpin—though never referred by that name in the episodes. Even DD is not called Daredevil, but The Man in Black, as he doesn’t don a real costume until the end.

That crime fiction should infuse a comic characters’ universe is nothing new. Network TV has given us the rugged Gotham, a look at a young, stiff-necked Iraq veteran (or maybe it’s Afghanistan, it’s not specified), Jim Gordon, who as a detective on the Gotham City Police Department is paired with a bent, but savvy vet of the department, Harvey Bullock; a corrupt department that Gordon battles as hard as he does the criminals—some of whom will become part of Batman’s rogue’s gallery. There’s a pre-teen Bruce Wayne we also see on his way to becoming the Batman (once nicknamed the World’s Greatest Detective before his Dark Knight days) some years down the road. And there’s an Alfred Pennyworth who as an ex-SAS soldier, is the most kickass butler you ever saw.

Just as the Netflix Daredevil mined material from the comics, particularly the tenure of artist-writer Frank Miller when he helmed the book, Gotham gets some of its mojo from Gotham Central, a former comics series written by Greg Rucka and Ed Brubaker, drawn mostly by Michal Lark. Like The Wire, the series never had breakout numbers in terms of an audience, but it’s gritty, hard-hitting look at life beyond the cape garnered critical praise. 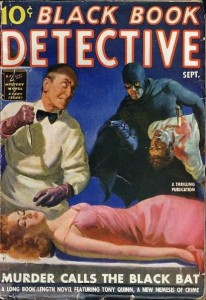 But Daredevil is not the first blind crime fighter, nor is Batman the first masked bat. In the pulps of the 1930s there was crusading district attorney Anthony Quinn. He’s blinded by acid thrown in his face by a gangster. He trains using his other senses, which are heightened. Then when he undergoes experimental surgery and receives the eyes from a slain police officer, he finds he can not only see again, but also has night vision. The Black Bat is born. He’s a twin, .45-toting masked avenger, with a secret crime lab and armored sedan, battling hoods and saboteurs in stories like “The Faceless Satan,” “The Murder Prophet,” and “Without Blood They Die.”

Pulp scribe Paul Ernst created a short-lived character called Seekay, a riff on the masked crime fighter type. He was a private eye who hid his disfigured face behind a plastic facemask. It was never explained why his face was that way. Before teenaged friends Jerry Siegel and Joe Schuster debuted Superman, they, along with writer-publisher Malcolm Wheeler-Nicholson, created in Detective Comics No. 1 (where Batman would premiere in issue No. 27) the rough, tough, Sam “Slam” Bradley. He’s shown on the cover of that first issue with a torn shirt, biceps bulging, and swinging a mug around by his ankle. Slam is still around today and once did leg work for Catwoman. Also in comics was Mark Mason, the ex-WWII O.S.S. agent turned private eye who, as a twist, is assisted by his secretary Louise Grant in her secret identity as the Blonde Phantom, in domino mask, .45, slit dress, and heels.

In the groovy seventies, for a time Wonder Woman lost her powers and as Diana Prince was trained in kung fu by the blind master I Ching, and became a dress-shop owning, part-time globe-trotting private eye rocking the Mrs. Peel, of the other Avengers, look. Misty Knight, who has a bionic arm, is a private eye in the Pam Grier as Coffy mold, who pals around with superheroes in the Marvel Universe. Then there’s Jessica Jones. In the critically acclaimed Alias comics series, she’s the ex–minor superhero Jewel, who used her super strength, kind of invulnerability and ability to leap in great bounds, to prowl the underside of the Marvel Universe. She smoked, swore, drank, and was sexually active—winding up pregnant by Luke Cage. Not for nothing, Jones and Cage are getting the Netflix treatment as well.

Recently, it was announced the Spirit was getting revived. Created by Will Eisner in 1940, he was once private detective Denny Colt, a man in a domino mask, blue business suit, and matching hat and gloves, with no .45s or guns of any kind, whose stories ran the gamut from humor, satire, and crime, to the supernatural. It’s a combination of these factors and the imprint of Eisner’s shadow and light work on the strip—as artist and writer—that has kept the character going through various incarnations. Surviving even the mightily flawed movie version written and directed by the aforementioned Frank Miller

In Uncanny by Andy Diggle and Aaron Campbell, a con man uses his powers of being able to read the thoughts and tap the knowledge of people he touches for gain—even as those powers have started to become unreliable. In the Sleeper mini-series, Ed Brubaker’s and Sean Phillips’ undercover man Holden Carver can’t feel pain but can store and pass on pain he receives to anyone he chooses. Thief of Thieves Conrad Paulson, known as Redmond, decides to atone, sort of, and rip off other thieves of their swag. And though not super powered per se, other than a bad mutha…Shaft has been retro revived in the seventies, in a six-issue mini-series by David Walker and Bilquis Evely for Dynamite.

It seems then comics will continue to be a source of new takes on crime fiction. 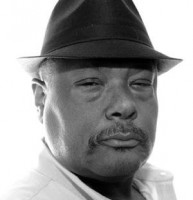 Gary Phillips latest includes editing the linked pulp thriller anthology Day of the Destroyers, and Astonishing Heroes, a collection of his prose superhero stories features characters like the Silencer, Onyx Adams, and the Blonde Ghost, among others.