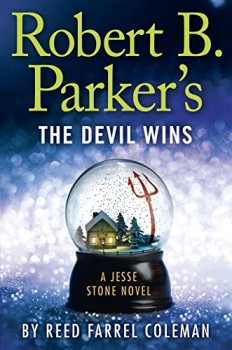 For Reed Farrel Coleman it’s been quite a year. Not only has the Long Island author ended one series and begun another but he’s also continuing a beloved series with ROBERT B. PARKER’S THE DEVIL WINS.

“I have come to be a Parker fan in the last 10 years or so,” says Coleman. “Hey, I was late to the party, but I’ve sure enjoyed it. Parker was an unusual and exceptional talent in that he was a writer’s writer and a reader’s writer. As a pro myself, I could see the techniques he used to make it look easy. How his prose was disarming, straightforward, economic, sometimes poetic, but never self-conscious. His prose never screams ‘Look at me!’ or goes out of its way to be pretty. But writers understand what looks easy isn’t always so. I came to appreciate his craftsmanship and his deep understanding of the connection between his characters and his audience.”

Protagonist Jesse Stone is a departure from Parker’s private eye Spenser, his best known character. Stone is a damaged man, fired from the Los Angeles Police Department because of his drinking problem, a demon he struggles throughout the series. He also has a complicated relationship with his ex-wife Jennifer. However, despite his issues, Stone is a good cop, as proven in his job as chief of the Paradise Police Department, located in the fictional town of Paradise, Mass.

Stone debuted in 1997’s Night Passage and has been played by Tom Selleck in a series of tele-films (the latest, Jesse Stone: Lost in Paradise, debuts in mid-October). Parker completed the ninth novel, Split Image, but didn’t live to see it published. After Parker’s death in 2010, Michael Brandman penned three Stone novels until the baton was passed to “hard-boiled poet” Coleman in 2014 with Robert B. Parker’s Blind Spot.

Strangely enough, Coleman wasn’t deterred by the Herculean task of taking over the adventures of a renowned author’s beloved character. Looking back, he supposed he might’ve been–had he thought about it too much.

“I had a book to write and a character to learn. Plus, I had people to help me along. Chris Pepe, who was Mr. Parker’s editor for many years, was there for me, as was Ace Atkins [who took over the Spenser novels]. And there was my buddy, author Tom Schreck. Tom is an avid Jesse Stone reader and Parker fan. All of their advice was an enormous help and comfort. But none of this is to say I didn’t have very difficult choices to make about my approach to Jesse Stone and to the series.”

Coleman continues: “One of the promises I made myself, Parker’s estate, and Putnam was that I wouldn’t tinker with the essential nature of Jesse or his supporting cast… They are who they were when [Parker and Brandman] wrote them. But my approach to character is a more internal and intimate one than theirs. I think readers want to know why a character does what he does or thinks what he thinks. I know I do. So although my Jesse acts as he has always acted–a bit aloof, a bit of a self-contained man–you now understand why. Any reader of the series knows Jesse’s life was turned upside down, no pun intended, when his shoulder was severely injured in a minor league baseball game in Pueblo. But you never quite knew the circumstance surrounding the injury or how he felt deep inside about it. Let me put it to you this way: I use the same camera Mr. Parker used, but my lens has a more narrow focus.”

“I don’t go there,” he said. “I realized that no matter how good I might be at imitating Mr. Parker’s voice, I would still never be him. I had no desire to just do imitation. For a series to evolve, it must not keep repeating itself. So I chose to approach the writing with respect to Mr. Parker, but not by imitating him.”

2014’s The Hollow Girl was the finale in the Prager series. Coleman had a simple reason for ending the series.

“Because I had nothing more to say with Moe,” says Coleman. “He was getting too old to be a believable hard guy. Near the end there, the only thing he could flash with any credibility was his AARP card. I always knew there would be an end to the series. I built that into the conception of the series and into all the installments by aging him. He may reappear in a short story now and then. We’ll see.”

“Gus goes through a personal odyssey of rediscovery while he helps solve a particularly heinous crime,” said Coleman. “We go with him.” 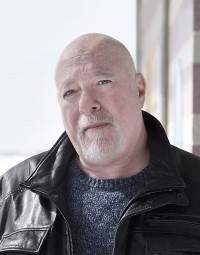 Called a hard-boiled poet by NPR‘s Maureen Corrigan, Reed Farrel Coleman is the New York Times Bestselling author of Robert B. Parker’s Jesse Stone series. He is a three-time Shamus Award winner for Best PI Novel of the Year and a three-time Edgar Award nominee in three different categories. He has also won the Audie, Macavity, Barry, and Anthony Awards. Born and raised in Brooklyn, he now lives with his family on Long Island.