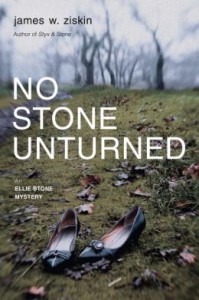 Reporters make great fictional detectives: they are inquisitive, determined, and generally unarmed. James W. Ziskin proves how engrossing a journalist’s investigation can be in his latest novel, NO STONE UNTURNED: AN ELLIE STONE MYSTERY.

This charming tale, the sequel to Ellie’s first case, STYX AND STONE, is set in upstate New York. The story takes place in the 1960s when a young reporter who played by her own rules couldn’t count on computer analysis, cell phones, or 21st century CSI tools when searching for a killer. Ellie is a fascinating character and a strong protagonist, as her creator explains.

“She’s charming, witty, and magnetic,” Ziskin says. “She has a strong ethical compass, even if her personal mores are libertine. She knows she’s smart, probably smarter than anyone in the room, but she’s not arrogant.”

In fact, Ellie doesn’t see herself as a heroine, she just does what she feels a reporter should do. She learns of a twenty-one-year-old society girl found dead and half-buried in the woods. Ellie is the first reporter on the scene. Alone and far from her native New York City, Ellie sees this investigation as a chance to pull her career out of its downward spiral. In addition to a crafting a fine whodunit Ziskin uses the setting to good effect to reveal character in interesting ways. After all, upstate New York is itself an interesting character.

“I like the cultural conflicts and discoveries of a fish out of water at play in NO STONE UNTURNED,”he says. “Ellie is a sophisticated New York girl from a privileged, intellectual background. New Holland offers little of that world. But it does present many other challenges for her to surmount. “

The fictional New Holland is, as he puts it, a town in atrophy, its industrial past a receding memory. As such, New Holland is both a canvas and a catalyst for story and character. It boxes Ellie in, but provides escape hatches too. However, it’s not River Heights, the Mid-western home of Nancy Drew, and Ellie is not quite what we would have expected Nancy to grow up to be although you still won’t find a lot of foul language or violence in Ellie’s stories.

“You won’t find much gunplay either,” Ziskin says, “but there is darkness and a good deal of sex (implied, if not described) in my books, so these are not cozies. But, like Nancy Drew, Ellie solves murders with her wits, not her fists. On the other hand, Ellie is much more likely to fall into bed with someone. Maybe even Ned Nickerson or Clark Kent.”

As previously mentioned, Ziskin sets Ellie’s stories in the 1960s, in order to transport us to another time and place, and of course to be able to tell stories where technology is not a tool in solving murders. But writing historicals, even as recent as this, has challenges.

“There are the obvious ones: research, believability, tone, and language,” Ziskin says. “You have to know what you don’t know when writing in the past. And just because it’s the not-so-distant past doesn’t make it any easier. For instance, New York City changed the name of Fourth Avenue to Park Avenue South in 1959. Ballpoint pens didn’t really catch on until the 1960s. And what did the dashboard of a 1955 Dodge Royal Lancer look like? These are things I’ve got to get right if I want the atmosphere to be believable.”

In addition to engaging characters and a strong plot, you’ll notice some very tasty prose in Ziskin’s books. It should come as no surprise that he is a linguist by training, and that background has certainly impacted his writing.

“My linguistic training taught me to love and respect words,” he says. “More than anything else, I find the quest for the right word the hardest part of writing. I don’t want to settle for an adequate word when the perfect word is out there somewhere. It doesn’t need to be a fancy word; just the right one.”

The right words will continue to propel Ellie Stone into mysteries for the foreseeable future. Book number three is already scheduled to appear in the summer of 2015, Ziskin has the fourth novel laid out. For now we can enjoy NO STONE UNTURNED knowing that the adventure with Ellie Stone is just getting started.

James W. Ziskin (Los Angeles, CA), is a freelance writer and the author of STYX & STONE, the first Ellie Stone mystery. A linguist by training, Ziskin has a bachelor of arts and a master of arts from the University of Pennsylvania in Romance languages and literature.