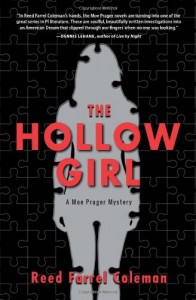 This month Reed Farrel Coleman closes out one of the great private eye series. In Moe Prager’s ninth case, THE HOLLOW GIRL, Coleman takes his detective out in grand style.

The case appears simple at first. A woman from Prager’s past hires him to find her missing daughter, who was known as the “Hollow Girl” on the Internet. But the case becomes confusing when no one actually seems to be missing. Then Prager finds a woman’s dead body.

In some ways, Prager is a typical hardboiled private eye. After ten years as a New York City cop, an injury forced him into retirement so he decided to become a detective. But unlike many of his peers, Prager has grown and matured over the course of the series. And throughout, he is the deep, moral kind of protagonist we can both like and respect.

“He is fiercely loyal, loving, and tough,” Coleman says. “He struggles with his Judaism, and is extremely philosophical about life and death. I think anyone would be lucky to have him as a friend.”

However, Prager never sees himself as a hero. In Coleman’s words, Prager believes in heroic acts, and in heroism, but not heroes. He does, however, believe in villains, and in these stories they are always deep and three-dimensional.

“All of my crime novels, Moe books or otherwise, feature appealing bad guys,” Coleman says. “Even more important is the crucial role played by antagonists who aren’t the ‘bad guy.’ For instance, in many of the Moe novels, his father-in-law is a constant source of fear and anxiety for Moe because they share a terrible secret, one that could destroy them both.”

Coleman’s novels are indeed character driven. Prager is such an interesting person that it’s easy to see how people might read the series because they care about him and what will happen to him next. But that’s not to say plot is unimportant in Coleman’s work.

“I have come to think of plot as increasingly important to my work,” he says. “What good is beautiful flesh without a strong skeleton beneath it? A writer can’t always depend on his protagonist to keep the reader’s attention.”

Moe Prager will be missed because, I think, great hardboiled detective fiction is in short supply in the twenty-first century. It’s a difficult form to master, in part because there are several accepted conventions. But Coleman believes that only lazy, unimaginative writers stick to all the conventions and conceits.

As he says, “One of the appeals of the Moe Prager novels is that I have taken the conceit of the angry, loner, alcoholic, Christian, white, tough-guy detective and turned it on its ear. For most of the series Moe is a happily married family man with a wife and a daughter, a house, two cars and a mortgage. He drinks but he’s not a drunk. He has money because he’s in business with his brother, so he doesn’t live from case to case for money. He would rather use words than a gun. He’s Jewish. Not all of his streets are mean ones. That said, PI novels will always turn on the protagonist’s moral choices and code. That is one of the conventions of PI fiction that is essential to the sub-genre.”

He does admit that modern technology has made this sub-genre, born in the 1920s before CSI, more difficult to create.

“It’s made writing crime fiction more difficult all around because readers have become far more sophisticated, and fudging just won’t do,” says Coleman. “But the writer is still in charge of what is on the page. So he or she must shape their plots in such a way as to have technology play less of a role or to have it be a red herring.”

So when a writer has a successful series character, what does it feel like to give him up? Coleman says it’s actually very liberating to let go.

“Like any partnership, it gets maddening,” Coleman says. “It was time for us to let go of each other. I had said everything I could reasonably say through Moe and he had come to the end of his shelf life as a hardboiled detective. I never wanted to take him past the point of credibility or to move him down to Boca and make him a senior center detective. It was the right time to stop. The old sports adage applies. Better to give up a player one year too early than two years too late.”

Of course, Coleman won’t be idle in the future. This fall we’ll see his first shot at Robert B. Parker’s Jesse Stone. He feels blessed to have the honor of continuing Jesse Stone’s story, calling him a rich character with much territory to mine. But be prepared: his take on Jesse will not be an imitation of Parker’s writing.

“I don’t think readers want imitation,” Coleman says. “I have tried to be true to the spirit of Mr. Parker’s writing and to honor the character. I think the best way to describe it is that I use the same camera as Mr. Parker did, but I’ve changed lenses.”

But before we see Coleman’s take on Parker’s creation we have the final Moe Prager novel to savor. And this one is a little different from its predecessors, a bit more existential in nature but at the same time less ambiguous.

“With THE HOLLOW GIRL, Moe ties up all sorts of loose ends, especially emotional ones,” Coleman explains. “I always knew this would be the last Moe book, so unlike the other books, which were more organically written, I knew I had to write to a certain predetermined end.”

Coleman says he is eager to hear readers’ reactions to THE HOLLOW GIRL. I think I know what that reaction will be, but all lovers of hardboiled detection should hurry to find out for themselves. 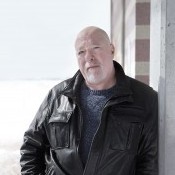 Called a hardboiled poet by NPR’s Maureen Corrigan, Reed Farrel Coleman is the author of seventeen novels. He is a three-time recipient of the Shamus Award and a three-time Edgar Award nominee in three different categories. He has also won the Macavity, Audie, Barry, and Anthony Awards. He is an instructor of English at Hofstra University and a founding member of MWA U. He lives with his family on Long Island.