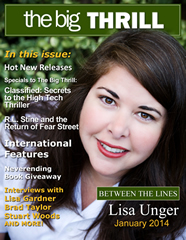 Read the stories that were featured in the January edition of The Big Thrill.

Explode into the New Year with 30 new thrillers from ITW Members, including debut novels from John Dixon and Elizabeth Heiter! We have two Specials to the Big Thrill this month: James R. Hannibal takes us behind the scenes of the high-tech thriller; and Dawn Ius brings us the latest on R. L Stine and the Return of Fear Street. And you won’t want to miss Anthony J. Franze’s Between The Lines Interview with Lisa Unger. Happy New Year!

Here’s what’s in store for January:

Congratulations to Kathy Bennett, the winner of this month’s BIG THRILL giveaway. Kathy will receive an assortment of signed thrillers including Fear Nothing by Lisa Gardner, Tell No Lies by Gregg Hurwitz, Don’t Look Now by Michelle Gagnon, Minding the Store by David O’Neil, Wilderness Peril by Elizabeth Goddard, Until Death by James L. Thane, The Joshua Stone by James Barney, Double Vision: Code Name 711 by F.T. Bradley, White Fire by Douglas Preston and Lincoln Child, The Green Line by E.C. Diskin and Lesser Creatures by Peter Giglio.