Be Careful What You Conjure 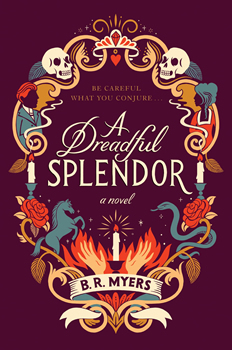 In Victorian London, Genevieve Timmons poses as a spiritualist to swindle wealthy mourners—until one misstep lands her in a jail cell awaiting the noose. Then a stranger arrives to make her a peculiar offer. The lord he serves, Mr. Pemberton, has been inconsolable since the tragic death of his beautiful bride-to-be. If Genevieve can perform a séance persuasive enough to bring the young lord peace, she will win her freedom.

Soothing a grieving nobleman should be easy for someone of Genevieve’s skill, but when she arrives at the grand Somerset Park estate, Mr. Pemberton is not the heartbroken lover she expected. The surly—yet exceedingly handsome—gentleman is certain that his fiancée was murdered, even though there’s no evidence. Only a confession can bring justice now, and Mr. Pemberton decides Genevieve will help him get it. With his knowledge of the household and her talent for illusion, they can stage a haunting so convincing it will coax the killer into the light. However, when frightful incidents befall the manor, Genevieve realizes her tricks aren’t required after all. She may be a fake, but Somerset’s ghost could be all too real…

A DREADFUL SPLENDOR takes the reader on a journey from the worst Victorian London has to offer to the splendors of wealth and prestige in a Victorian country estate. Our guide is spirited Genevieve, who stops at nothing to find out the truth behind the lies. The Big Thrill was lucky to have author B.R. Myers take some time from her busy schedule to discuss everything from her inspiration for her chilling new release, to what she’s working on next. 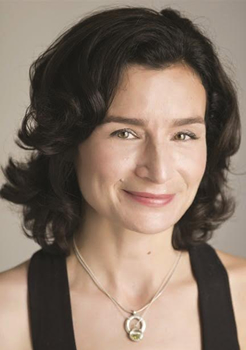 Please give us a little background about what inspired A DREADFUL SPLENDOR and how the story took shape for you.

The story started much the same way most of my book ideas come to me, in the form of a certain scene, a tiny vignette that keeps replaying in my mind. I ask myself: Is this the beginning, the middle, or the end? And who is telling the story? The more questions I ask, the more layers get added, and slowly, the premise becomes clear. For A DREADFUL SPLENDOR, it was the final séance scene, complete with a fake spiritualist and rigged tricks. Then I wondered What would happen if you had this all set up and the real ghost showed?

A DREADFUL SPLENDOR has many surprise twists and turns. How did you manage to balance the foreshadowing and twists, yet keep the pacing?

I have great editors! For my first draft, I do an extensive outline that keeps me on track and organized. I use a three-act template of eight sequences, and then intersperse pinch points. It gives me a basic view of the entire book in one glance. Even if I’m unsure how to end a particular scene, I know the character will be forced to either act or make a decision that moves the plot in a certain direction.

It seems like a lot of work in the beginning, but it saves time and energy in the long run.

The main character, Genevieve, is a spiritualist in Victorian London. Can you tell us about your research, and how historically accurate you felt you needed to be? 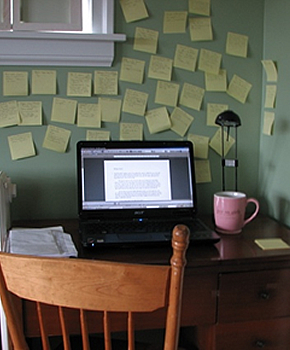 Myers’s writing desk (which is actually an old sewing machine)

Genevieve came to me completely fleshed out with a backstory and a trunk full of coping mechanisms and grief. Still, she is one determined character with a lot of sass.

Once I had her firmly visualized, the setting came next. I chose London in 1852 due to my research into fake spiritualists and the gimmicks and tricks they used to do to convince their audience they had contacted the dead.

After that, my research tends to focus on the small, daily aspects of life—that’s what I find intriguing about history, as opposed to the larger, grander facts like politics, for example. I like to know the details about fashion and hair styles, and even the meals. I want to know not only what meat and vegetables would be available to that certain class, but how were they routinely prepared? What would make a meal special? What was considered a luxury for the table?

I love those details when I’m a reader, so naturally, I want those in the books I’m writing. It’s the smaller, common, everyday nuances that really help a reader feel they’re inside the story.

Somerset Park was such a fantastic setting. Can you tell us about the inspiration for this setting?

I was eight years old and home sick from school one day, and my mom let me watch the local channel’s afternoon movie, The Pit and the Pendulum (she’s a big Vincent Price fan). The last five minutes of that movie terrified me—but in a fun, shivery kind of way. And even though I’ve seen most of his other movies (House of Wax is stellar!) it was that first trip to the Medina Castle in The Pit and the Pendulum that was the seed that eventually led me to write A DREADFUL SPLENDOR many (many) years later. Never underestimate the power of television! 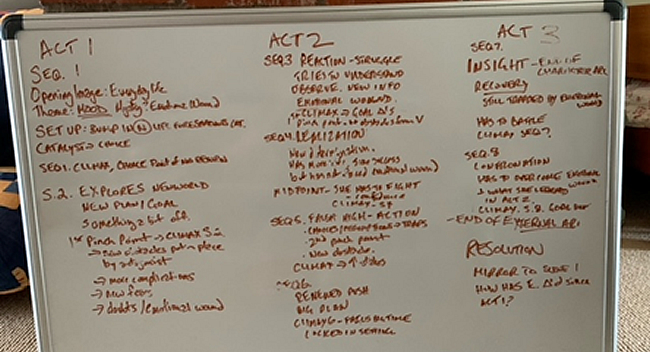 What advice would you give regarding the research required to write a historical thriller?

Determine what mood you want the story to evoke so you can have a clear image of that in your mind. I always think of my stories as a movie, and I break it into different categories: costumes, hair, setting, soundtrack, etc. Then once you have a firm grasp on that, turn to research and focus on what you need in order to create a cinematic experience for the reader. The delight is in the details. 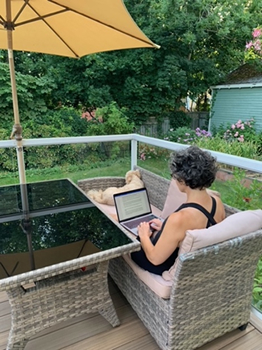 When it’s nice outside, Myers and her assistant, Oscar, prefer to write outdoors on the back deck.

Can you tell us what books or movies you read or watched that helped you prepare for A DREADFUL SPLENDOR?

The Pit and the Pendulum movie was the original inspiration, the kernel of an idea that started it all. But when I seriously thought about writing the book, I chose three of my favorite novels focusing on what I admired about each of them, and how I could create that same feeling for A DREADFUL SPLENDOR: Pride and Prejudice for the slow romance, Fingersmith (by Sarah Waters) for the dark family secrets and plot twists, and The Shadow of the Wind (by Carlos Ruiz Zafon) for the gothic tone.

What can you tell us about what you’re working on next?

Another gothic mystery that was also inspired by watching television (more to come on that at a later date). I can’t give too much away, but it’s in a similar vein as A DREADFUL SPLENDOR.