A Family Reunion to Avoid 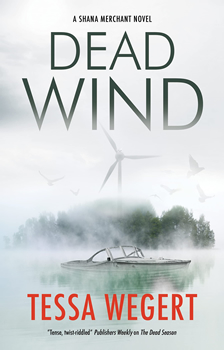 Tessa Wegert is back with DEAD WIND, a tense thriller featuring returning heroine Shana Merchant. DEAD WIND is the latest in the series that started with Wegert’s debut novel in 2020, Death in the Family, followed by The Dead Season later the same year. Already a Publisher’s Weekly starred review, DEAD WIND is filled with mystery and secrets.

Senior Investigator Shana Merchant must dredge up dark secrets and old grudges if she’s to solve the murder of a prominent local citizen in the Thousand Islands community she now calls home.

The body is discovered on Wolfe Island, under the shadow of an enormous wind turbine. Senior Investigator Shana Merchant, arriving on the scene with fellow investigator Tim Wellington, can’t shake the feeling that she knows the victim—and the subsequent identification sends shockwaves through their community in the Thousand Islands of Upstate New York.

Politics, power, passion . . . there are dark undercurrents in Shana’s new home, and finding the killer means dredging up her new friends and neighbors’ old grudges and long-kept secrets.

That is, if the killer is from the community at all. For Shana is keeping a terrible secret of her own: 18 months ago, she escaped from serial killer Bram Blake’s clutches. But has he followed her . . . to kill again?

In this interview with The Big Thrill, Wegert delves more into what inspired her series as well as teases what we might see next from her feisty protagonist. 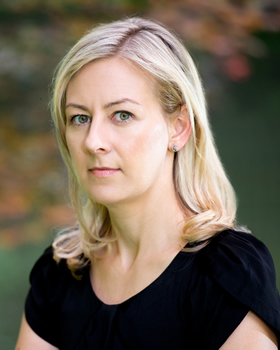 DEAD WIND is the third book in the Shana Merchant series. Did you have all the books planned, or do you write each one as it comes to you?

Honestly, my approach has been to tackle each book as the opportunity to write it comes along and hope for the best. I initially wrote Death in the Family (Book One) as a standalone, so I didn’t have an overarching idea of where Shana was going or what she’d discover along the way. I think that has helped me, though; it forces me to dig deep into the previous books for nuggets of potential and get creative with Shana’s character arc. There are multiple storylines braided into the series, and it’s been fun to decide which of them to yank next.

When setting is done well, it become another character in the story. Your setting is fantastic. How do you decide where to base your novels?

Thank you! More often than not, setting is where the story starts for me, and in the case of DEAD WIND, I was fixated on Wolfe Island. It’s a sparsely populated Canadian island on the border of Ontario and New York, where the St. Lawrence River meets Lake Ontario, and it’s home to one of the largest wind farms in Canada. I visited it about five years ago, on what happened to be an extremely windy day. By the time the ferry docked, the sky was threatening rain, and everything was washed in this eerie light. I had the sense that the island would make for an especially unsettling crime scene, and when I sat down to write DEAD WIND, I remembered all those details. The story—of a murdered local government official with ties to Shana’s new town, a strongly-contested wind farm project, and a community harboring grudges and secrets—came together from there. 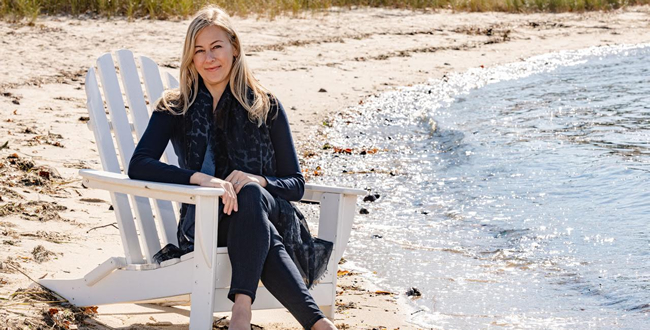 Wegert at her local beach in the town of Darien, CT

When writing a series, how do you strike a balance between keeping loyal readers entertained while drawing in new readers?

It can be tricky. It’s important to me that each book work is a standalone so readers don’t have to play catch-up, but the books also need to move Shana’s story forward while addressing ongoing subplots. The approach I take is to have each book introduce a new mystery for Shana to solve, but then link that to her abduction storyline and relationship with serial killer Blake Bram. The personal and professional repercussions of Shana’s history with Bram play a part in every book, and I have a good time looking for ways to work them into a new homicide case. 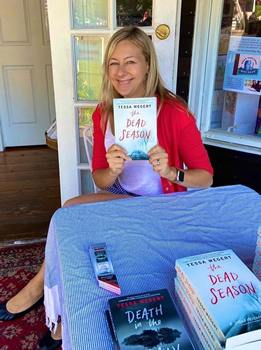 Shana had a very traumatizing experience happen earlier in the series. How do you manage to keep her motivated while dealing with a trauma that would shut others down?

Shana’s abduction by Bram, which readers learn more about with each book, is always on my mind. It’s a specter that trails her on every case. Shana feels an immense amount of guilt over escaping Bram when others weren’t so lucky—but there’s some good that came from that experience, too. Because Shana knows first-hand what it’s like to be a victim, she’s able to bring more empathy to her investigations. Because she spent eight days as a killer’s captive, knowing her survival might hinge on her ability to read him and his motives, Shana has a keen eye for deception. While she’s found ways to leverage her trauma, she still struggles to overcome it, and her drive to push through the pain has kind of become her superpower. She isn’t healed—far from it—but she’s learned how to tap into her shame and rage and use that to her advantage.

Is there anything about DEAD WIND that no one has asked that you’d like to share with us?

I haven’t had many questions about the book’s title to date, but I can share that it’s a reference to a nautical term describing a wind that opposes a boat’s course. Boating is a theme in this book, but the title also represents the conflict between Shana and Bram. I’d be remiss if I didn’t mention the excellent Finnish crime series Deadwind, which I’m completely obsessed with. I guess the title does double duty by representing Shana’s story while paying homage to Nordic noir.

Will we be seeing more of Shana in the future?

I’m happy to report that there’s a fourth Shana book on the way. All I can say about it right now is that while there have been some big changes for Shana, book four is very consistent with the rest of the series (wink-wink). 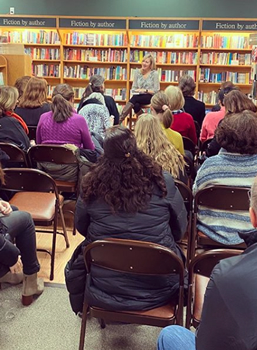 Wegert reads from her debut Death in the Family at Connecticut’s Barrett Bookstore in early 2020.

I suspect I’m like most mystery writers in that I like to escape into a literary puzzle box and challenge myself to surprise readers. But writing crime fiction can also be about taking a closer look at pressing social issues: commercialization, political corruption, the environmental impact of alternative energy. I explore all of these through the lens of small-town life in DEAD WIND.

Without giving too much away, DEAD WIND—the third book in the Shana Merchant series—needed to resolve an issue that had been plaguing my protagonist. At the same time, that issue was a primary motivation for her and a driving force in her life, and DEAD WIND isn’t the last book in the series. The biggest challenge for me was wrapping up that major subplot while continuing to keep readers invested in Shana’s story. In a way, this was also the biggest opportunity, because it forced me to go deeper into Shana’s psyche and the human condition.

Louise Penny, Jane Harper, and Tana French have all influenced my writing. I’m in awe of their ability to peel back the layers of a crime and subvert expectations about communities and relationships to reveal the darker side of life.

What books do you currently have in your TBR pile?

Oh, so many exciting ones that I’m not sure which to pick up first. They include Samantha M. Bailey’s Watch Out for Her, Denise Mina’s Conviction, Heather Chavez’s Blood Will Tell, and Eric Rickstad’s I Am Not Who You Think I Am.