A Daring War Rescue Based on True Events 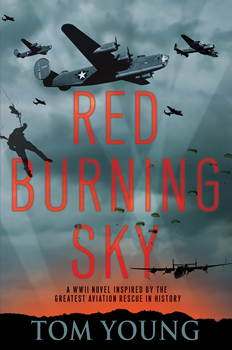 Not every World War II adventure has to take place in a battlefield. Tom Young’s latest, RED BURNING SKY, is the exciting story of a daring rescue—American pilots pulling other American pilots out of war-torn Yugoslavia. And it’s all based on true events.

In the summer of 1944, Chetnik and Partisan factions in Yugoslavia were not just fighting against the German occupation—they were also battling each other. Hundreds of Allied airmen were shot down over this dangerous area, including American lieutenant Bill Bogdonavich, a bombardier on a B-24 Liberator. Shot down while bombing the German-run oil refineries in Romania, he bailed out over Nazi-occupied Yugoslavia. Friendly guerrillas and villagers gave him food and shelter.

“Bogdonavich comes from a Serbian-American family,” Young says. “His father emigrated to the United States after World War I. The father’s nostalgia for the Old Country and the son’s disdain for the old ways have always been a source of friction between them. But now the younger Bogdonavich suddenly finds himself on the ground in the Old Country, dependent on people just like his father. Quickly he learns to appreciate why they are the way they are, and why they do things the way they do.” 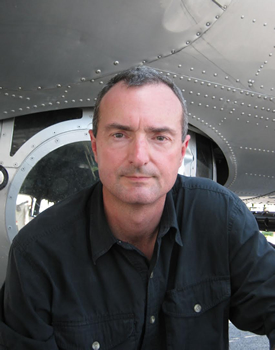 “Carlton has a checkered past, with rumors of cowardice,” Young says. “He sees volunteering for this dangerous rescue mission as a way to find his courage and redeem himself. Vasa is a very young man, a boy, really, and he comes of age in a battle for his country.”

While these heroes personalize the adventure, there’s no single bad guy in RED BURNING SKY. Instead, the characters face the looming danger of capture in German-occupied territory.

“The enemy is all around them,” Young says, “and they never know when they’ll hear the crack of sniper fire, the roar of an enemy fighter plane, or a shouted order to halt.”

Young has written both gripping fiction and nonfiction war stories in the past. While he has a strong reputation for historical authenticity, Young says he wrote this novel to appeal to both history buffs and to thriller readers who like a rip-roaring war story.

According to Young, “RED BURNING SKY is inspired by a real-life World War II event that’s not well known: Operation Halyard, which was the rescue of more than 500 downed American aviators in Yugoslavia. I often call it ‘the greatest military rescue you’ve never heard of.’ I hope that gives the book extra appeal to all categories of readers.” 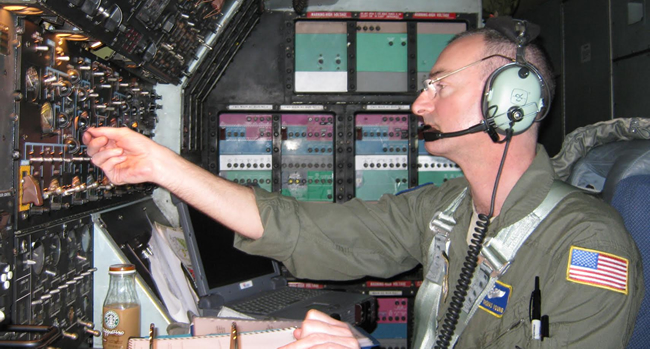 Young at the flight engineer’s panel of a C-5 galaxy. Photo courtesy of the author

Of course, one doesn’t need to be a World War II enthusiast to know which side won. One of the challenges of writing historical fiction is that many readers may know how a story ends. Still, Young is able to maintain an element of suspense throughout his narrative. How?

“I try to give a sense of the ever-present risk of capture,” Young explains, “which was very real for fliers downed in Yugoslavia. As these downed aviators hid in cellars, haylofts, and barns, there was never a moment in which they were not in danger, and I try to convey that. In addition, they didn’t just wait for salvation; they worked to communicate with headquarters and help bring about their own rescue. Those efforts also add tension to the story. Whenever they transmitted a coded message, they didn’t know if it was received or understood. And they didn’t know whether the transmission had been detected by the Germans.”

During his service with the Air National Guard, Young logged nearly 5,000 hours as a flight engineer on the C-5 Galaxy (pictured above) and the C-130 Hercules, while flying to almost forty countries. Photo courtesy of the author

Operation Halyard isn’t well known now because it was never highly publicized like some other military wins. The mission was politically and diplomatically sensitive, and it was kept quiet even after the war.  So to get the story right, Young had to dive into some serious research. Luckily, there’s a good nonfiction book about Operation Halyard: The Forgotten 500 by Gregory Freeman.

“That book was a valuable source,” Young says. “Also, there’s a terrific organization dedicated to memorializing and researching Operation Halyard. It’s called the Halyard Mission Foundation, and its website is halyardmission.org. The website was also quite useful to me.”

As previously mentioned, Young’s work includes both fiction and nonfiction. Young flew as a C-130 flight engineer with the 167th Airlift Wing, West Virginia Air National Guard, and his book The Speed of Heat is an oral history of his unit’s missions in Iraq and Afghanistan. He says that putting together an oral history is a vastly different process than writing a novel. 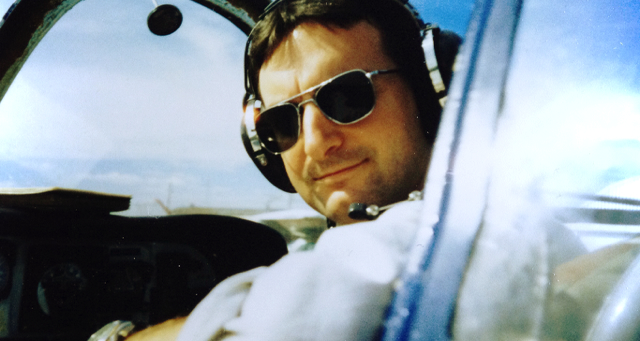 Young in a T-34 Mentor. Photo courtesy of the author

“An oral history requires a lot of legwork and clerical work,” Young says. “You conduct dozens of interviews, and then you have to transcribe them. Then you edit them for brevity and clarity. Then you make decisions about how to organize them, by topic or chronologically or by various themes. The bottom line is that an oral history requires a lot more work than a novel. Mine was a labor of love, and I’m glad I did it. I wouldn’t rule out doing another one, but I’d have to get very excited about the topic.”

For now, we’re excited about Young’s fiction, and you will be too once you’ve read RED BURNING SKY.