Dealing with the Universality of Loss and Change 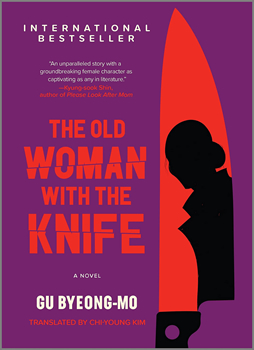 Female assassins were cool long before Killing Eve’s Villanelle hit the small screen—but her recent popularity certainly hasn’t hurt the genre. The trick for creators, then, is to find a fresh spin.

Korean author Gu Byeong-mo does exactly that with her serious—but also humorous—novel THE OLD WOMAN WITH THE KNIFE, the story of Hornclaw, a 65-year-old assassin on the verge of retirement. When she’s sucked into a new case, Hornclaw is faced with the fact that she’s gone “soft” over the years, and her age has made her vulnerable. So much so that instead of early retirement, Hornclaw could be looking at something more…permanent.

Published in Korea in 2013, THE OLD WOMAN WITH THE KNIFE makes its North American debut this month—and though it makes a statement about how older women are treated and considered in the country, Byeong-mo’s story transcends Korean culture and examines a number of important issues.

In this interview with The Big Thrill—translated by Chi-Young Kim, who is also the book’s translator—Gu delves into the inspiration for her story, her feisty protagonist, and Hornclaw’s loyal dog, Deadweight. 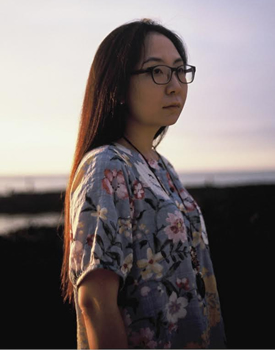 You’ve given us a unique twist on the female assassin character with Hornclaw, a 65-year-old assassin on the verge of retirement. Please tell us more about the inspiration for her character.

These days, with streaming services booming throughout the world, it’s fairly easy to discover older women who are leaders of dangerous or important organizations in all kinds of content, from movies to plays to novels. But when I was writing this novel, which was published in Korea in 2013, an assassin brought to mind a young, sensual woman or a very fit man of any age. (At least in Korea!) I grew up watching Hollywood movies and French films of the 1990s, so the killers that I thought of were Nikita or Léon. I was interested in writing about someone with characteristics that were the complete opposite, and that’s how Hornclaw was born.

Although Hornclaw is exceptionally good at her job, she’s in a vulnerable place at the start of THE OLD WOMAN WITH THE KNIFE. What was the question that drove the plot for this novel—and what compelled you to start this book with your protagonist near retirement?

All I’ve done was to take a class about feminism, called Women’s History, in college 27 years ago, and I myself am subjected to live in a patriarchal society. When I was writing this novel in 2012, I didn’t set out to write a novel about feminism. Still, I had the vague understanding that it’s hard to live in our society as a woman, and if you’re an old woman, you’re in an even more disadvantaged situation, pushed outside social safety nets and becoming more economically precarious. I wanted to take that vague thought and give shape to it. To do that, the main character had to be someone who faced more challenges, someone being pushed out as younger generations came in. Concern and empathy and affection were at the core of what I wanted to explore, in addition to coming up with the plot, and that’s why some feminists believe THE OLD WOMAN WITH THE KNIFE is pretending to be a feminist novel. I understand why they think that. Truthfully, I wrote it without thinking about any of that. I think this is why it’s been belatedly popular in Korea. A novel I wrote a long time ago has aligned by chance with the demands of a younger generation.

Though this is a serious thriller, THE OLD WOMAN WITH THE KNIFE infuses some clever humor throughout—and also, I laughed out loud at her dog’s name, Deadweight. In your opinion, what is the role of humor in the thriller genre? Why was it important for you to include it in this novel?

In my mind, the name Deadweight is colored with loneliness, suggesting uselessness and ephemerality, but thank you for thinking it was funny! Parts I wrote with the purpose of provoking laughter were Bullfight’s bedraggled appearance when he’s first introduced, and at the end where the old men argue over who was once more important. In both THE OLD WOMAN WITH THE KNIFE and other genres, my narrative can get tense, and the reader can feel claustrophobic from my long sentences. I tend to add a little levity here and there; the reader needs to take a breath, and you need a change of atmosphere. There aren’t very many people who notice the humor, maybe because it’s closer to a cynical smile than laugh-out-loud funny, but I think that’s okay too. 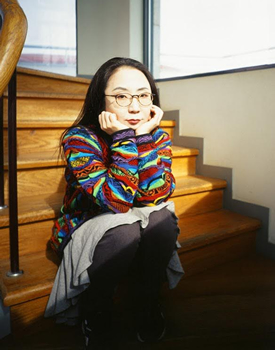 Readers unfamiliar with Korea are in for an experience—the book really delves into Korean culture. How does that cultural portrait impact how the story changes or makes the thriller more unique? Is there a message you wanted to share with readers about Korea?

Well, this book isn’t how you should learn about Korean culture! (laughs) The daily life of a killer is purely imaginative and fictitious, and the novel delves into negative aspects about how older citizens are considered and treated. When I was writing this book, I never imagined that it would reach an audience abroad, so sharing my culture wasn’t something I even thought about. But I do think this novel deals with the universality of loss and change.

One of the themes that underpins the novel is the idea of the restrictions “aging” can have on our bodies and minds. What led you to explore those themes?

I was a young mother in my early thirties when I was writing this book, and I believed that writing a story far from my own daily life was an artistic challenge. Aging and death come equally to everyone, regardless of wealth and nationality.

You write exceptional fight scenes! The Big Thrill is as much for aspiring writers as it is for readers. What tips would you offer for capturing the action?

Thank you. Depending on the reader, some consider the fight scenes to be too long and slow. A scene that would have taken two or three seconds in a movie suddenly takes up a whole page when it’s written down in detail. I’m not in a position to offer tips to writers, but I do have my own rule: go into a scene, whether it’s action or love or labor, with as much detail as you want. Many writing classes emphasize that the reader should be able to read a passage and quickly understand the content. So they advise you to leave only the parts that are necessary to convey the meaning while the rest is considered superfluous and something to be edited out. But I don’t focus on “conveying” the substance or the subject, what’s often considered the “story.” The sentence itself forms literature, and I don’t see it as a mere vessel to deliver the content. So when you see a description that’s over a page long, and the action feels slow or you don’t know what’s going on, one reader may close the book, bored, while another might take another look, wondering, “What is this scene?” or “Why is this scene here?” I devote myself to building and expanding the world of fiction with readers in the latter camp. 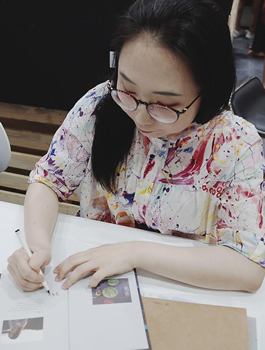 Last winter, I published my latest novel, Into the Ivory Gate, in Korea. This novel is complicated and confounding, written in a stream of consciousness, and explores a dream world that touches on Homer, Virgil, and ancient and Buddhist worldviews. It’s entirely different from THE OLD WOMAN WITH THE KNIFE. Since it’s a novel destroying the basic structure of a story, I’m not sure if this book will reach readers abroad, but I always enjoy writing in a variety of styles.