Getting Drawn into the Dark 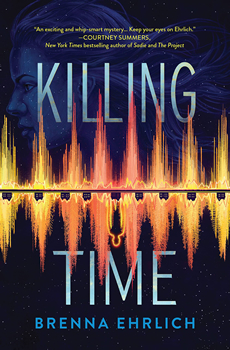 Summer in Ferry, Connecticut has always meant long, lazy days at the beach and wild nights partying in the abandoned mansions on the edge of town. Until now, that is.

Natalie Temple, who’s never been one for beaches or parties in the first place, is reeling from the murder of her favorite teacher, and there’s no way this true-crime-obsessed girl is going to sit back and let the rumor mill churn out lie after lie—even if she has to hide her investigation from her disapproving mom and team up with the new boy in town.

But the more Natalie uncovers, the more she realizes some secrets were never meant to be told.

Author Brenna Ehrlich is no stranger to writing about crime. She recently took time out of her busy schedule to talk to The Big Thrill about her new release, KILLING TIME. Here she discusses everything from character development, her favorite true-crime podcasts, and how her experience as a journalist helped her second novel take shape. 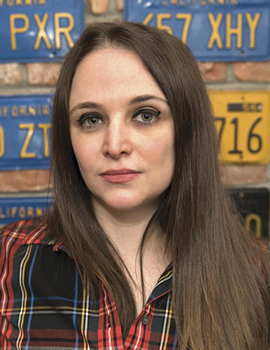 Can you tell us how the book’s main character, Natalie, came to be? How did she take shape for you?

Natalie actually came from a few different places. When I was first messing around with this idea, I was fascinated with Michelle McNamara’s work searching for the Golden State Killer and her book, I’ll Be Gone in the Dark. Michelle never got to finish her book—or find out that the killer was found—because she died before its completion, but it took over her life. I was interested in that as someone who writes about true crime—how researching cases like these and wandering into the dark can overwhelm you.

Michelle had a criminal case in her childhood that followed her into adulthood and contributed to her interest in covering true crime. And I realized, so did I. One of my grade school teachers died in a mysterious way similar to how Mrs. Halsey died, and it’s bothered me for decades. Although there are some similarities between their stories, the people in my book are very much made up in my imagination. I was inspired by this story from my youth to create a character who is also drawn into the dark and who finds herself going too far when she loses sight of the humanity behind the stories she’s obsessed with. 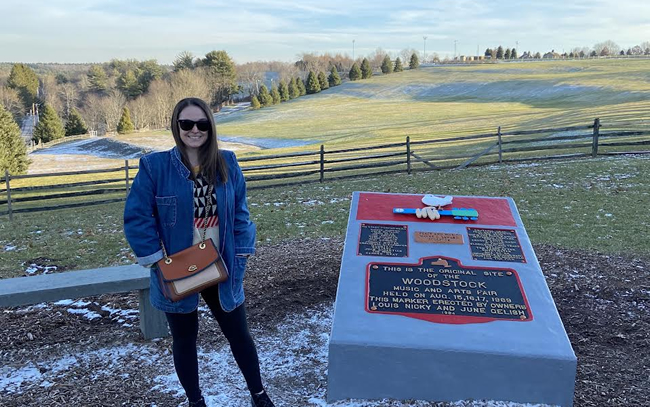 Ehrlich at the site of Woodstock. Photo courtesy of the author

Initially, I had only written Natalie’s story, but then my amazing editor Rebecca Kuss asked: Why is Helen so anti-true crime? It’s always a challenge trying to figure out parents’ roles in YA, as they often keep main characters from doing what they need to do to keep the story going forward — unless they’re absent or terrible. But when I started delving into Helen’s reasoning for keeping Natalie from her interest in crime, it brought Helen’s story into focus, which actually ended up dove-tailing nicely with Natalie’s narrative. (That’s about all I can say without ruining anything!)

It was really important for me that every character—even the “bad guy”—have a reason for acting the way they do, to keep anyone from being a plot device. I ended up loving Helen as much as Natalie when I was finally done with my edits. 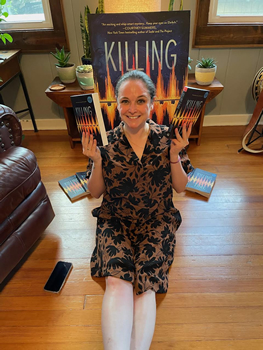 Ehrlich celebrates with ARCs of KILLING TIME. Photo courtesy of the author

A true crime podcast is central to the plot of KILLING TIME. Were there any that you listened to that helped inspire the shape of the story? If so, which ones?

Like Mrs. Halsey, I’m a big fan of true crime podcasts that tell an incredible story without sensationalizing bad deeds. I mention a few in KILLING TIME: S-Town, Serial (of course), and Your Own Backyard, to name a few. I’m also a huge fan of journalist Connie Walker’s podcasts, which focus on missing and murdered indigenous women. Any podcast that seeks to go beyond just freaking an audience out is worth a listen in my opinion. I love when good reporting leads to real change, to justice, to redemption.

On the flip, I have listened to a LOT of bad podcasts, which I will not name here. These podcasts also informed the story, as Natalie is a super novice reporter and makes a lot of mistakes: accessing information she shouldn’t, putting herself in danger, recording without permission. Investigative journalism is a tricky, delicate skill, and when it’s good, it’s very, very good—but when it’s bad, it’s potentially harmful.

What pushed KILLING TIME from an idea to a full-fledged novel? 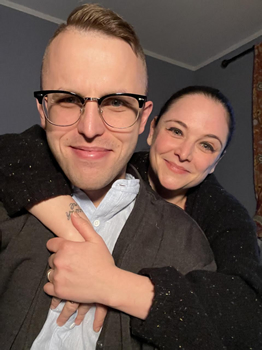 Ehrlich and her husband, journalist Morgan Enos. Photo courtesy of the author

It’s hard to know when that switch finally flips. I have written more than a few books that have ended up in the drawer—started others and never finished. After I wrote the first couple of pages of KILLING TIME, I just felt something click. The first sentence has stayed the same in every draft, actually. I felt like there was something there and decided I needed to get a draft done fast, so I wouldn’t drag my feet. From there, I just approached writing like a job and decided to power through the first iteration in three months. Even though it’s been through a million edits since then, I just had so much fun writing Natalie’s story. It flowed. I guess that’s just the magical aspect of the writing process.

How did your journalist experiences writing for the likes of Rolling Stone and MTV News help or hinder your leap into writing novels?

Having a full-time job certainly doesn’t leave a lot of time for writing, but everything I write and report on is just more inspiration. I write about true crime for Rolling Stone, so it’s all kind of just research for my fiction. I talk to cops, investigators, experts, specialists, families of victims and even murderers for my day job, so that actually really helps when it comes to writing characters—lending them that level of realism. 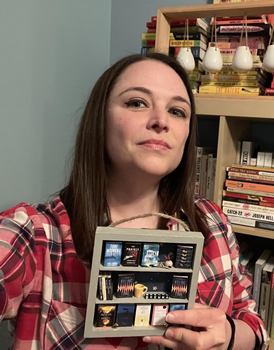 Ehrlich with a custom bookshelf from Books By Britton. Photo courtesy of the author

What is it about the thriller genre that draws you to it?

There’s something weirdly comforting about thrillers and true crime. For me, it’s pulling together the facts, tracing the logic, putting together the puzzle pieces. When I’m watching a true crime documentary, for example, I don’t want to linger over the crimes, I want to hear how this very specific clue helped detectives solve the mystery. Yes, terrible things happen, and people get hurt, but at the end of the story, the truth comes out. Life doesn’t really work that way, but at least fiction gives us those answers.

Right now, I’m just sorting through all the ideas banging around in my head and waiting to see which one won’t let go.