A Fresh Exploration of Lies, Secrets, and Shocking Truths 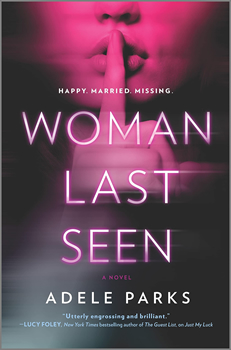 Adele Parks—recently named a Member of the Order of the British Empire by Queen Elizabeth and one of the nicest and most down-to-earth authors—plunges deep into the dark in her newest thriller, WOMAN LAST SEEN.

Two Londoners, Leigh Fletcher, wife of Mark and stepmom to Oliver and Sebastian, and Kai Janssen, wife of Daan, disappear in the space of one week. Could two happily married women, one middle class, one affluent, simply walk away from their families and homes at the same time? With no evidence to connect the two cases or suspect a crime, London Police Detective Clements fears the disappearances might be related—but the devastating truth lies just out of reach.

Praise for Parks’ previous work ranges from “utterly engrossing and brilliant” (author Lucy Foley) to an “exhilarating, shrewdly observed tale about morality and greed” (Publishers Weekly). Kirkus Reviews says, “Each individual chapter is so well-crafted and engaging that the story’s intrigue and suspense continue to build, and the characters’ emotions ring true and evocative throughout.” The same can be said of this story, in which Parks explores themes of female friendship and competition, class, entitlement, and societal expectations. 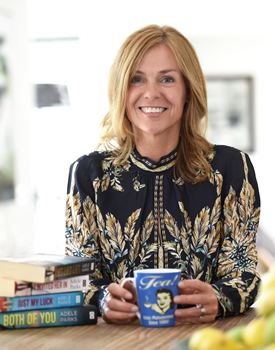 Parks graciously gave us some insight into WOMAN LAST SEEN, her life, and her success as an author in this interview.

“Since I was a little girl I’ve dreamt of being a writer, but I don’t think I had any concept of how many books I might sell or how many languages my work would be translated into. It’s mind-blowing—even now I can hardly imagine it!

“I believe my success can be attributed to a number of factors. First, I absolutely love what I do. I don’t mind working around the clock because writing is the thing that I enjoy the most; it’s when I reach my most happy and Zen state. Secondly, I read a lot. And I mean A LOT, so I’m aware of my market. Reading also helps me stay curious and adventurous. It keeps my game high. I don’t ever want to write a book that a reader feels is familiar and leaves the reader underwhelmed or unchallenged. Resilience, tenacity, and luck have also played a part in my success.”

She’s consistent, writing 1,000 to 2,000 words daily for seven months of the year and developing ideas during the other five months. She edits as she goes, writes in silence, and has never missed a deadline. She even runs her social media herself.

Parks during a visit to St Petersburg, Russia, where her son is studying

Her home office is “frankly never as tidy as I would like. I’m generally a reasonably neat and organized person. The rest of my home is fairly minimalist, but once I’m writing, I don’t really care about mess—I’m not sure I even see it. Sometimes, I look up from my screen and I realize my HUGE desk is covered in books, papers, stationery, pens, shopping, etc., and I have a very tiny space left to type in. It’s always a surprise.”

Over the years, Parks has written romantic suspense, domestic noir, romantic comedy, and historical fiction before turning to psychological thrillers. “I simply write the stories I want to write, and I leave it up to my publishers to work out the genre. This seems to me to be the sincerest way I can write. Rather than genre, the consistent thing about my books is my interest in people, in characters.” 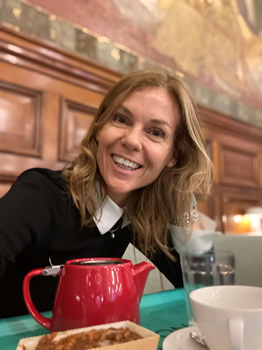 Parks at the Royal Academy of Art, where she often goes to write

In her early days, Parks posed questions to her characters like, “Whom would they marry? Where might they live? Would they have kids? What would they sacrifice for a career/family/partner?”

Now she focuses more on consequences. “As we get older, doors close; an opportunity taken necessarily means another opportunity has to be passed by. It’s a darker thought. Psychological thrillers are the natural home for characters grappling with the concept of dealing with consequences. Psychological thrillers also are quite simply fabulously entertaining. They ought to keep a reader turning pages at speed and hovering on the edge of their seats. I like being entertaining.”

Her latest story, WOMAN LAST SEEN, is an emotional roller coaster. “It does subvert our normal way of thinking about things. Looking at something with more empathy and less judgment is the way forward.”

Inspiration came from “those weathered, faded, dog-eared posters we’ve all seen attached to streetlamps, mug shots of lost loved ones. Personally, I find those posters that plead for sightings of spouses, parents, children, siblings who have gone somewhere, horrifyingly sad. I used to find myself turning away. Afraid to catch the eye of the missing person who is stuck forever in the moment the snapshot was taken, instead of living, breathing, and moving among us, as they should be. However, we owe those missing people and their families our attention. I hope that WOMAN LAST SEEN gives the missing some attention.” 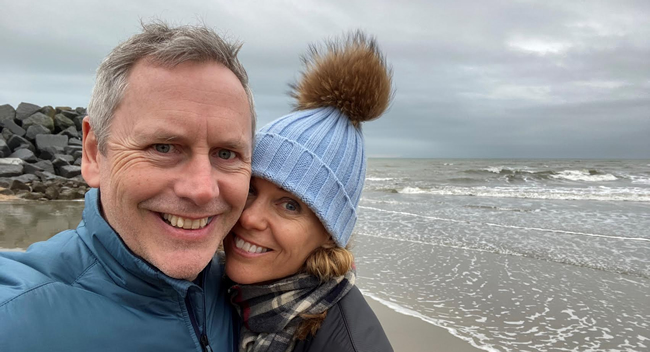 Parks plots with care. “Generally speaking, plot comes first for me, before character. Although only by a fraction. My books have a number of turns, reveals, and twists. I find those plot points are most convincing and compelling if they are planned in advance.”

When one reads a lot, some twists are no longer surprising, but this book contains a shocker. “I’m thrilled to keep readers on their toes and deliver a surprise or two. However, I can’t reveal how I come up with the twists because I don’t know; they simply occur to me. Clearly, I have a very dark and twisted mind.” 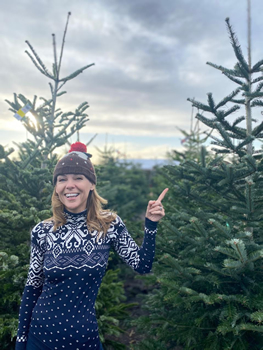 Her duty, Parks believes, is to reflect the richness, complexity, beauty, and dreadfulness of humanity. “I think my readers would be incredibly disappointed if I presented characters as totally good or totally evil, because a) that’s not realistic—does anyone know anyone who fits that bill? And b) it would be incredibly simplistic and boring! There would be few opportunities for plot twists if the characters were two-dimensional. I want to write about people who are striving to be decent but have failings because I think that way. We might learn something about forgiveness of ourselves and each other.”

This belief is evident in her main character. “My biggest challenge was creating a lead character who does something so audacious that she forces us all to look at how we’ve chosen to live our lives. I expect readers to get angry at her, yet I wanted them to retain some sympathy for this maverick heroine; in fact, I wanted them to gun for her. I’m sure a carefully constructed backstory went a long way to solving that challenge.”

Parks also finds inspiration in authors who “probe at society’s hypocrisy. Evelyn Waugh, Jane Austen, and F. Scott Fitzgerald are perhaps my three all-time-forever favorite novelists. They breathe life in-between the lines, relying on what is left unsaid almost as much as what is said in parts.” 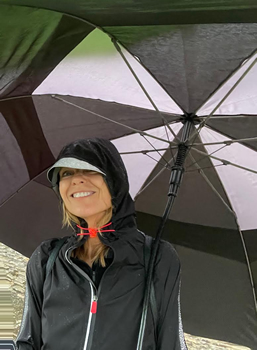 Parks on a British summer holiday. (“Staycations demand an umbrella,” she says.)

London offers a vivid setting for her stories. “I live in Surrey in the UK. That’s about 35 minutes out of London on the train. I go into London once a week or so. I love my capital city. I find it endlessly fascinating and stimulating; there’s always something new to discover. Samuel Johnson famously said, ‘When a man is tired of London, he is tired of life.’ I think this might be true! I enjoy walking around London capturing moments and filtering them down into my novels. I wrote a lot of WOMAN LAST SEEN during lockdown. I—like everyone—struggled in lockdown but enjoyed escaping into my memories of London streets to write these scenes.”

WOMAN LAST SEEN is currently being developed as a movie. “That project is extremely exciting, and I’ve been working closely with the writing team on the outline and scripts. It’s a different approach to writing, far more collaborative, but I love it. I’m thriving on having a team and enjoy seeing these other creatives’ vision of my work.”