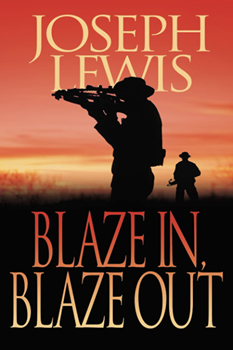 “Crime fiction should be more than bullets and car crashes,” author Joseph Lewis says. “I want my characters to be 3D, to be real to the reader. I want the reader to miss them when they are gone, and to look forward to the next installment. Human and family drama that parallels the main storyline is my specific niche as an author. My writing is more than just a ‘shoot em up’…”

Yet Lewis—whose eighth novel, BLAZE IN, BLAZE OUT, hit shelves early last month—admits he still wants readers to feel “…  entertained, with the characters lasting a long, long time. To understand there is always hope, even when it seems there isn’t any. That being a hero is not necessarily the extraordinary individual, but an everyday person who does the extraordinary.”

At its core, the novel is about unbounded revenge, unrestrained vindictiveness, and callous ruthlessness.

The two detectives thought it was over, but it is only the beginning.

Eiselmann plans for a quiet family weekend at home. After attending a high school soccer game, O’Connor heads to Northern Wisconsin for a fishing trip with another cop, and the four teenage brothers he has adopted.

From his prison cell, Andruko hires two contract killers to take down O’Connor, Eiselmann, and anyone else in the way. The killers can be anyone or anywhere, striking at will.

The quiet weekend and the short vacation swiftly turn into a deadly nightmare. 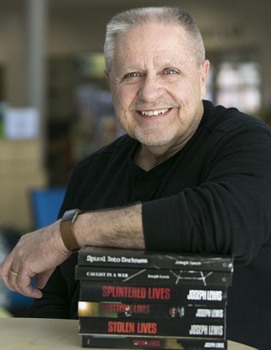 Lewis has been writing from the time his sixth-grade teacher wrote “story starters on a 3×5 note card. Later, when I was a school counselor, I watched the movie Stand by Me for the first time. I went home and wrote the first draft to a short story that eventually got published. From there, it was only a small step to writing a book.”

During educational outreach as a volunteer with the Wetterling Foundation, Lewis always “felt the need to ‘give back’ to the missing kids and their families and … wanted to tell their story.”

After having been in education for 46 years, he took creative writing and screen writing courses at UCLA and USC. His first four novels were based on “stories I heard from my counseling office and from my research into missing children.”

“David Baldacci—not only his characters, but the way he incorporates their thinking into their actions. They are not infallible, and I find that endearing.

“Stephen King—his boldness, his ability to ‘not give a damn’ in what he writes.”

Lewis admits that his characters and story do tend to overtake what he’s planned, though he finds such precocity intellectually exhilarating.

“While I have an idea of what I want to write as I sit down at my laptop, there are times when what is intended doesn’t happen, and something better emerges. That is thrilling for a writer.”

Lewis’ writing involves the law enforcement community, which he understands very well. “There is a brotherhood and sisterhood among cops … which runs deep and thick. While the cop’s life might be on the line, so might their families’ and friends’, as in the case of BLAZE IN, BLAZE OUT. Other cops rally to protect and defend.”

This knowledge and empathy of the police community go a long way in determining the degree to which his writing is character-driven within an authentic setting.

“In BLAZE IN, BLAZE OUT, I focus on three cops, two in particular. In my previous books, the focus was on the dynamics of a patchwork family of adopted boys. Often, they get embroiled in a situation or circumstance that is not of their doing, and the cops get them out of it. In BLAZE, the cops got themselves in a life and death struggle but didn’t realize it until it was too late.”

Born and raised in Wisconsin, Lewis is happily married to his wife, Kim. They now live in Virginia, where he spends his free time with his family and enjoys “music, movies and reading”—but not solitude.

Mark Twain, Roald Dahl, and Virginia Woolf surrounded themselves in the solitary splendor of garden-sheds. George Orwell finished Nineteen Eighty-Four in a damp, isolated hut on Jura, the Hebridean island famed for its whisky.

Lewis’ plume does not seek reclusion but responds to the vibrancy of life.

“I cannot write in isolation. I write at the kitchen table with the TV on, my wife talking to me, the dogs playing, and with all that life throws at me. I cannot write in quiet. I need noise and ‘life.’ The only time I might separate myself from the kitchen and noise is when I am working on a difficult passage that requires my full concentration.”

It is in such a milieu that his writing circumvents genre conventions to craft thrillers integrating the tensions of interacting relationships within a framework of suspense and action.

After having been in education for forty-six years as a teacher, coach, counselor, and administrator, Joseph Lewis has semi-retired and now works part-time as an online learning facilitator. He uses his psychology and counseling background in crafting thriller/crime/detective mysteries. He has taken creative writing and screen writing courses at UCLA and USC.

Lewis has published seven books, all available on Amazon and each to excellent reviews: Taking Lives (August 2014; May 2021) the prequel to the Lives Trilogy; Stolen Lives (November 2014; May 2021) Book One of the Lives Trilogy is a BestThrillers 1st Place Award Winner for Crime Fiction and a Literary Titan Gold Book Award Winner; Shattered Lives (March 2015; May 2021) Book Two of the Trilogy; and Splintered Lives (November 2015; May 2021), Book Three of the Trilogy each from True Visions Publications, and then re-issued by Black Rose Writing; Caught in a Web (April 2018) from Black Rose Writing, which was a PenCraft Literary Award Winner for Crime Fiction and named “One of the Best Crime Fiction Thrillers of 2018!” by Best Thrillers; Spiral Into Darkness (January 2019) from Black Rose Writing, which was named a Recommended Read by Author’s Favorites. His newest, Betrayed (November 2020) is a PenCraft Award 1st Place Winner, Maxy Award Runner-Up for Mystery-Suspense, a Literary Titan Silver Book Award Winner, and a Reader’s Favorite 5 Star Rating Winner. BLAZE IN, BLAZE OUT is currently available for preorder and will be released January 6, 2022. Lewis is currently working on another thriller-crime-mystery.

Born and raised in Wisconsin, Lewis is happily married to his wife, Kim. Together they have three wonderful children: Wil (deceased July 2014), Hannah, and Emily. He and his wife now reside in Virginia.