Series Ends with a Bang 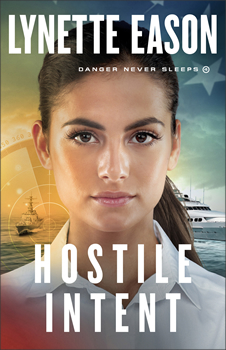 HOSTILE INTENT might be the last in Lynette Eason’s Danger Never Sleeps romantic suspense series—but one could argue that it’s the best. It’s a gripping read that starts with a bang, and the action doesn’t let up until the last pages.

For those who don’t know, the four military-themed books are tied together by four friends: three who met in the military and one who was already friends with the Acceptable Risk (the second installment) heroine, Sarah Denning.

HOSTILE INTENT features the recently discharged Ava Jackson, who is attacked by an unknown assailant while on a compassionate visit to her ailing mother. The intervention of FBI Special Agent Caden Denning saves her, but things are about to get a whole lot worse. Caden reveals to Ava that she may hold the key to the savage murders of three families, and he needs her help before anyone else is harmed. The hits show a pattern, and the killer has a deadly agenda. Worse, if Caden and Ava can’t discover what the link is, Ava may be next on the hit list. Ava and Caden have to fight for their lives, and there are many twists and turns that keep the reader permanently on their toes.

The Danger Never Sleeps series joins Eason’s other successful series such as Elite Guardians and Blue Justice. She says it’s the characters that keep her writing multiple series.  “I love to watch them grow and see the twists and turns their friendships take. In HOSTILE INTENT, I think readers will love Caden’s new perception of Ava. He thinks he knows her, but he finds out there is still a lot that he doesn’t know about her.” 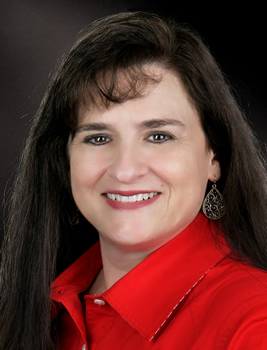 Ava is just one in a long line of strong female protagonists that Eason has created—but she does have her favorites. “With Danger Never Sleeps, I think I’ll have to go with Sarah from Acceptable Risk, although Ava runs a close second. But Sarah is strong. She doesn’t hold back and is no one’s doormat. I love how she doesn’t let anyone define who she should be and fights to be her own person. She’s just a cool character.”

Series writing does however require particular attention to detail, as Eason acknowledges. “The biggest challenges are keeping all of those details straight! By the time I get to the fourth book, I’ve forgotten what my heroine in Book 1 looks like. Green eyes or blue? So I keep a spreadsheet of my character descriptions and any other pertinent information I might need to keep things consistent across the stories.”

As well as keeping her characters on track, Eason is also a stickler for making sure the world they inhabit is credible. The plot is an intricate one that brings the reader into the realm of the CIA and national security. Her technique sounds a lot more straightforward than it actually is. “Research, research, research. Seriously, I know people in the military, and they were more than generous with their time in allowing me to pick their brains. 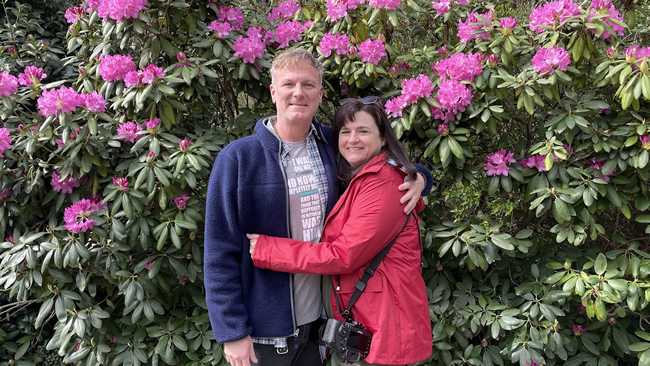 Eason with her husband, Jake, at Biltmore House in Asheville, North Carolina

“I try to research as much as possible to be as accurate as possible. I have resources—both FBI and CIA—who are willing to give me feedback. In fact, these friends read all my stories, and I’m so grateful for them and their willingness to fix all my mistakes. One friend even read different scenes and gave me feedback on how to fix them. That was such a blessing.”

In addition to keeping close to her characters and making sure that her research is top-notch, Eason shares a more unusual approach to writing when it comes to finishing her novels. When a book is almost done, she cleans her house. And not just in a light dusting sort of way: furniture is upended, and everything is blitzed, as her fans can see on her Facebook page. 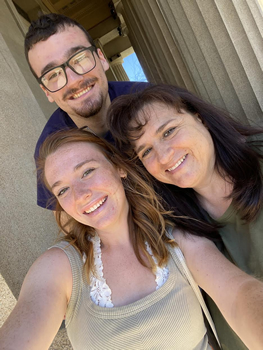 Eason with her children at the Parthenon in Nashville, Tennessee

“It helps me think,” she says. “I do puzzles during most of the writing, but at the end when I’m working out all of the details and making sure I’ve tied up all of the threads, I clean. I have no idea how that came about, but my husband is appreciative of that fact, since I rarely clean while I’m in the middle of the book.”

When both cleaning and the book are finished and her story is out in the world, Eason hopes that readers will not only enjoy it, but will take something away from it.

“I think it’s safe to say that we all have burdens and baggage,” she says. “We have first, second, and third impressions about people we know. Let’s face it, we all make judgments, but the truth is, we never know all there is to know about a person—or what their struggles are. I hope HOSTILE INTENT will remind readers not to judge too swiftly or too harshly and to look beneath the surface of others’ actions.”

And there’s no need to wait for any post-release dust (literal or otherwise) to settle. Eason is already excited for her fans to discover her next series.

“The next story is Life Flight! It features EMS helicopter pilot Penny Carlton and releases January 2022, and I can’t wait for readers to jump into this new series,” she says. “I adore the characters and their occupations. A ton of research went into this series, so I’m anxious to hear how it goes over with the readers.”