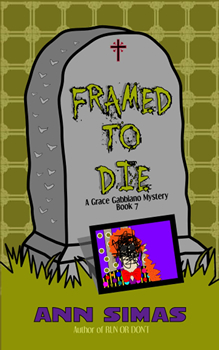 Prolific author Ann Simas has been writing since her teens, though her first book wasn’t published until years later.

Though she has written standalone novels and short stories, most of her books fall within one of her series, with her newest release, FRAMED TO DIE, marking the seventh installment of her popular Grace Gabbiano mysteries.

The novel kicks off when Grace is asked to perform a wellness check on Esmerelda Ditterman. When she arrives, the door is kicked open and Esmerelda is nowhere to be found. In the empty house, Grace finds a series of picture frames, all of them empty, except one. It’s a picture of Esmerelda’s family….but the mother has been “ripped” away. Is this image the key to finding Esmerelda? Grace is on the case…

In this interview with The Big Thrill, Simas talks more about her writing career—starting at the beginning.

You wrote your first book in high school. Would you tell us about it? Don’t spare the worst…

Somewhere, I still have the handwritten pages of that book. I found them when we made a move from Colorado to California a few years back. I can’t remember the story, but the mice must have enjoyed my words, because they had feasted on some of those pages. I couldn’t have been more than 15 or 16 when I started writing that book. I don’t recall the title, either, but I do remember one of my classmates waiting every day to read what I had written the night before. I think for a high-schooler, it must have been an okay read. One thing I know for certain is, I never lost the desire to write fiction. Thirty-six books in and I’m still learning and enjoying what I do every darned day.

You’re interested in genealogy. Have you found any family mysteries when researching?

When I was in high school, I remember my mother paying a genealogist for information about the Italian side of our family, including finding the family crest. That person came back with information that included a family crest and a pope and a princess in our lineage. Years later, I’ve undertaken the challenging job of being our family’s genealogist and compiling our ancestry. I’ve yet to find that pope or the princess, but then I’ve only gone back to the 1700s. I never imagined that I’d be able to actually go to Italy and do genealogy research in my grandparents’ hometown, or that I’d be able to visit the church they were married in, which now stands mostly in rubble, thanks to World War II and earthquakes.

I learned some interesting things as I found my ancestors. Italian women keep their surnames when they marry; their children take their father’s surname. If a child died, and the next child was of the same gender, it received the same name. If the second child died, the third child got the same name. The first-born sons were not named after their fathers, but the second-born sons were. I also learned that I was related to my cousins two different ways—my grandfather had two sisters; my grandmother had two brothers. One of my grandfather’s sisters married into my grandmother’s family, but unless I look at my Italian cousin’s family tree, I can’t actually follow how that happened and who sprang from that union.

Family is clearly important to you. I have three daughters, so the sister interaction between Delfina and Grace in FRAMED TO DIE had me grinning. How important are personal relationships to making mystery books work?

Since I come from a large Italian family, I’d have to say that creating the interaction between Grace and her siblings comes from both personal experience and personal observation. I grew up with one sister and two brothers. My sister and I had a different father than my brothers, due to my mother remarrying. They were 10 and 11 years younger than me, respectively. My mom had four brothers, and all but one of them had kids. As you can imagine, family gatherings were fun, loud, and entertaining. I wanted to capture all of that in my Grace Gabbiano books.

My siblings and I could talk about anything and make each other laugh and sometimes cry. One of my brothers died recently, and my sister died 16 years ago (he was diabetic, she was a heavy smoker and drank too much). My sister and I didn’t get along toward the end of her life, but that’s not a story I want to go into here. When Grace doesn’t quite get along with Delfina, or even Michaela, I know what that’s like.

Without the closeness the Gabbiano and Santarelli families experience, I don’t think the series would be as popular as it is. Their personal relationships are essential to keeping the series going. And then there’s the relationship between Grace and Aidan, which grows a little closer with each book.

Food and drink seem an integral part of cozy mysteries. (My characters are always having a cuppa or eating.) Why do you think this is?

My grandparents immigrated from Italy, where cibo (food) is an important part of life. At Christmas, I remember watching my grandmother make ravioli on the large cutting board my grandfather made for her in the early 1900s. She’d make a volcano with the flour, drop a few eggs into the crater, and mix it up with a little salt. Then she’d pound it and knead it. When she rolled that dough with the three-foot-long rolling pin he’d also made, you should have heard that dough go thwap, thwap, thwap! After Grandma died, Mom took over making the ravioli, then me. Making ravioli takes time, but it’s worth it because they’re delizioso.

One other thing we have every year is something we call ciribini. The filling contains chocolate, raisins, sugar, almonds, red wine, and unseasoned (fine) breadcrumbs. That all gets mixed together the day before. I use a melon-baller to scoop it up and onto a three-inch circle of sweet dough (rolled out using my KitchenAid attachment). It’s then folded in half, crimped around the open edge with a fork, and baked for about eight minutes. I usually end up with about 150. These are so tasty, my grandson favors them over everything else I bake at Christmastime.

In my books, I introduce conversations over mealtimes that are both fun and informative. I don’t want to simply have them chatting over food and not accomplishing anything. In my Grace series, the entire family (plus Aidan and his son, Dylan) gets together on Sunday nights at the “big house” for an Italian meal. This is catch-up time for the Gabbianos and the Santarellis, who usually join them. The women prepare the food, the men clean up the kitchen afterward. Then the men watch the kids play, maybe over a beer, and the women head to the front porch for a limoncello, or more of Uncle Vito’s Dago Red vino, and conversation.

You have several recurring characters in the Grace Gabbiano Mysteries series: who’s your favorite? Is there one who seems to want to take over the books?

I got the idea for this series when I took a forensics class at the local community college. Taught by the director of the local Oregon State Patrol Crime Lab, that class was amazing, even though some of the technical stuff about the machines used to test blood and other material really challenged me. My favorite characters are Grace Gabbiano, who is the only sergeant at Coburg Police Department, and Aidan Cruz, who came on board as the chief of police a week after Grace started working at CPD. Grace comes from a large Italian family, and her mother is on a quest to see her hook up with the chief. Grace, however, had a workplace romance at Seattle PD and has vowed never to have another one. Aidan is a divorced single dad who puts up with Grace’s mom’s antics with good humor.

Grace and Aidan both do a good job of taking over the books in this series. They butt heads all the time, but they also share an occasional beer on her porch swing. The question I get most often from readers is, “When are you going to let Grace and Aidan get together?” My answer is, “Not for a while, if ever.” However, if you read each of these books, you might wonder about the “if ever” because it’s obvious Grace and Aidan have more than employee-employer feelings for each other, which still leaves the biggest question unanswered…and that’s all I’m going to say about that.

Do you take part in author events? How has the pandemic affected them and has anything good come out of it? I’ve really enjoyed doing panels online because the audience can come from all over the world rather than locally.

I love doing author events, and I love talking to book clubs. Of course, all local and regional events were canceled during the COVID-19 pandemic, so I resorted to doing events on Facebook, which mostly turned out to be a bust. I discovered soon enough that people were watching TV or Netflix instead of reading. What did I do? I kept writing. Even though my sales floundered, I love writing, and it was, more or less, my salvation. Nine months after the pandemic hit us, sales began to pick up again. I hold out hope that author events will start coming back, and I can start doing more in-person promotions.

Over the years, one of my favorite events was the Coburg Quilt Show, where I had a booth and promoted my Grace Gabbiano Mystery, Quilted to Die. That particular two-day event resulted in meeting a lot of nice folks and great sales. I’ve also done the Coburg Holiday Market, a four-hour event that introduced me to more nice people who bought my books. Coburg is a town of about 1,000 residents located about eight miles north of where I live, and it’s where I’ve set my Grace Gabbiano Mysteries. When I took a criminal investigation class, one of the instructors was the then-police chief of Coburg. He took time to share his small-town policing experiences with me, which helped me formulate my stories. He had a BAD COP NO DONUT picture on his wall, which is why Grace wears T-shirts with that same saying.

Ann Simas lives in Oregon, but she is a Colorado girl at heart, having grown up in the Rocky Mountains. The author of 35 novels, one novella, and one short-story collection, she particularly likes to write a mix of mystery/thriller/suspense, with a love story and paranormal or supernatural elements. Three of her books were Finalists in RWA’s Golden Heart contest.

Ann is also an award-winning watercolorist and budding photographer who enjoys needlework and gardening in her spare time. She is her family’s “genealogist” and has been blessed with the opportunity to conduct firsthand research in Italy for both her writing and her family tree. The genealogy research from centuries-old documents, written in Italian, has been a supreme but gratifying and exciting challenge for her.