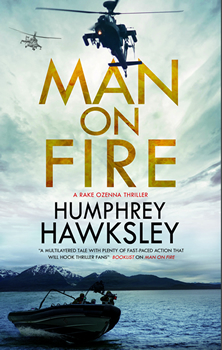 If you’ve been looking for a gripping espionage thriller with Cold War flavor plus 21st century global awareness, grab a copy of MAN ON FIRE, the latest from Humphrey Hawksley.

This one kicks off with a firefight on the Russian-American border that propels special forces agent Major Rake Ozenna into a tense and shocking high-stakes mission.  His orders are to serve as guide in a speed boat crossing from Russia in the Bering Strait. He’s horrified when the operation ends in a gun battle and the loss of vital intelligence involving a new, deadly weapon.

We first met Ozenna in Man on Ice, a story born from Hawksley’s BBC reporting assignment on the US-Russian border in the Bering Strait. Rake reflected the wild, inhospitable environment. But like the lead in any great series, Rake is growing and evolving.

“With the second thriller, Man on Edge, I wanted to show the reader not just what Rake can do in survival and action but how he thought, his wants, his fears,” Hawksley says. “He loves his close island community but knows that he has to escape its worst aspects. His parents have disappeared from his life. There are rumors that his father is living in Russia, and Rake is determined to find him. He has a soulmate and lover in trauma surgeon Carrie Walker from Brooklyn, but they live in different worlds. Rake develops as we all do with experience and challenges.”

So in Man on Ice, Rake’s job is simply to cross the Bering Strait and get the bad guys. In Man on Edge and MAN ON FIRE, we see Rake entangled in politics and turf fights as well as staying deep in the action. And the location certainly enriches the story. As Hawksley says, the environment creates the character of the community.

“The people of a South Pacific tropical island think and move differently from those in a frozen Arctic settlement,” Hawksley says. “Drop into that a hostile border, and you immediately have tension, history, and a story. Think of all the Cold War thrillers that included Checkpoint Charlie in Berlin—for me, the Bering Strait is just as captivating, where two hostile nuclear superpowers meet face to face. The environment is severe, inhospitable, and remote. The actual maritime boundary is unmarked and has not even been agreed on. Indigenous tribes straddle the border, some in Russia, some in America.”

The mysterious secret weapon that is the MacGuffin of the piece is rooted in 21st century warfare, something that would turn people against their own government. But like classic thrillers, this one has chilling firefights. Hawksley says the secret to doing them right is the keep them brief and to the point.

“The reader needs to know why it’s happening, what the stakes are, and how it will drive the plot forward,” Hawksley says. “Fight scenes for the sake of action can slow overall tension, and those that are long and technical can become boring. It has to reveal something about the characters, too. A good fight scene is like sharp dialogue. The shorter and snappier, the more impact it will have on the story.”

Being a journalist, Hawksley packs a lot of factual information into his fiction. He says he gets a kick out of boiling down a complex and important issue into a compelling television report, and with thriller writing, it’s the same instinct.

“For MAN ON FIRE, I was giving a lecture at the Military Commentators’ Circle at the RAF Club in London,” Hawksley says. “I quietly ran my idea past a member of the security and intelligence community who immediately understood what I was doing. We went back and forth debating whether this terrible scenario could happen, how governments might react, and nailing my fictional scenarios to a factual anchor. As the story took shape, I checked in with experts around the world, some of whom have endorsed the book.”

He calls another former BBC journalist, Frederick Forsyth, one of his heroes. Forsyth broke new ground using deep research to write The Day of the Jackal in 1971. And the Kirkus review for MAN ON FIRE called it a book for readers who still pine for the world of James Bond, a parallel Hawksley loves.

According to Hawksley, “James Bond is the great enduring character of thriller fiction. His creator, Ian Fleming, was highly placed in intelligence circles. In the Bond books, he gave us an insider’s view of the threats to our way of life at the time. He wove in the US-British special relationship through Bond and his CIA counterpart. He shows us new technology and lays out the nexus between bad government and organized crime through SPECTRE and SMERSH, when the main threat came from the Soviet Union. Rake operates against a similar backdrop.”

That said, the Kirkus reviewer may have touched on a desire in today’s readers for a hero and mission untangled by personal complexities. But let’s be clear: Rake is not a James Bond clone.

“Rake’s not suave—he would struggle to care if his martini was ‘shaken, not stirred.’  His island of Little Diomede has no roads, so he wasn’t raised on fast cars. He enjoys a cold beer and can whip up a mean pasta, but that’s about it,” Hawksley says. “Then there are the Bond girls. Rake only has one right now, and Carrie is off-again-on-again. And this is something that sets Rake apart from James Bond. Bond enjoys the company of women but avoids deep reflection on relationships. Rake combines a taste and skill for extreme action with more introspection and emotion than Bond was allowed to show and without being emasculated by it.”

Bond may have been the prototype in the 1950s and ’60s. but we live in the 2020s, and like Bond, Rake is very much a man of his time. Action fans will love watching him heat up today’s “Cold War” in MAN ON FIRE.

Humphrey Hawksley’s assignments as a BBC foreign correspondent have taken him to crises all over the world. His work has appeared in most major news outlets such as the New York Times, the Guardian, and Nikkei Asia. His television documentaries include Danger, Democracy at Work; The Curse of Gold, and Aid Under Scrutiny. Humphrey is a regular speaker and moderator on foreign affairs debates and seminars. He is also a host of the Goldster Book Club and Author Interview.