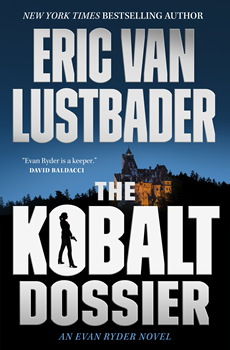 In THE KOBALT DOSSIER, the field agent for a black-ops arm of DOD—first introduced in The Nemesis Manifesto—once again finds herself facing powerful enemies who seek to alter the tenuous political balance of the world. But this time, she must also struggle to confront the mysteries of her own past.

After thwarting the violent, international fascist syndicate known as Nemesis, Evan Ryder returns to Washington, DC, to find her secret division of the DOD shut down and her deceased sister’s children missing. Now the target of a cabal of American billionaires who were among Nemesis’s supporters, Evan and her former boss, Ben Butler, must learn to work together as partners—and navigate their intricate relationship.

Their search will take them from Istanbul to Odessa to an ancient church deep within the Carpathian Mountains of Romania. And all along the way an unimaginable enemy stalks in the shadows, an adversary whose secret will upend Evan’s entire world and everything she holds dear.

Lustbader is the author of several New York Times bestselling thrillers, including The Testament, First Daughter, Last Snow, and Blood Trust, and was chosen by Robert Ludlum’s estate to continue the Jason Bourne series. In this interview for The Big Thrill he talks more about his career and the inspiration behind his latest thriller, THE KOBALT DOSSIER.

What was the biggest challenge this book presented?  The biggest opportunity?

Actually, the biggest challenge was also the biggest opportunity. The Nemesis Manifesto (the first book in the Evan Ryder series) plunked the reader down in the middle of the action. There was hardly any time to delve deeply into Evan’s past. Plus which, there’s a twist at the very end that precluded my writing about her past earlier. THE KOBALT DOSSIER afforded me the opportunity to explore Evan’s past as well as her sister’s life. To me, this aspect of the novel is the most fascinating because it was both the most challenging and the most rewarding part.

The rising tide of world-wide neo-fascist authoritarianism masquerading as “populism” both interests and terrifies me. In my decades-long writing career I have found that the best way to dissipate my own fear is to write about it. It’s a prime example of writing as catharsis.

Many who have had a chance to read pre-pub copies have commented to me how moved they were by the parallel stories of the two sisters—Evan and Bobbi. At heart, THE KOBALT DOSSIER is about family—the ways in which it is torn apart and the ways in which that break can—and cannot—be mended.

I’m over halfway finished with Omega Rules, the third Evan Ryder novel. This one deals more specifically with the roots of American-born terrorism, including a particular quasi-religious right-wing group.

One other thing I’d like to point out. After writing 11 Jason Bourne novels in 14 years, I felt it was time to step away. This was at the beginning of 2020. I had Evan in my mind for several years, but had not found the time to write about her. Besides, she needed time to gestate fully before she was born out of my head. In my mind she’s the most complete character I have created since Nicholas Linnear.