Thrilling Action Across Time and Continents 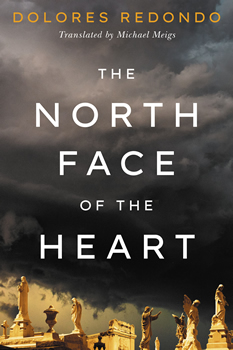 Millions of readers worldwide have already come to know and love Dolores Redondo’s homicide inspector Amaia Salazar through her bestselling Baztán Trilogy. Now Amaia is back in Redondo’s latest, THE NORTH FACE OF THE HEART. Interestingly, this isn’t a sequel but instead delves deep into Amaia’s past.

Much of the action is set in 2005, where we meet a young Amaia who is at the start of her career. She has relocated from the north of Spain to join a group of trainees at the FBI Academy in Quantico. With her exceptional case-solving skills, her intuition, and her ability to understand evil, Amaia is not your typical rookie. And FBI agent Aloysius Dupree desperately needs those skills. An elusive serial killer dubbed The Composer is on the rampage, selecting his victims from the scenes of natural disasters and leaving their bodies arranged in purposeful and inexplicable tableaux of death.

The year 2005 and natural disaster can only mean one thing, and that is indeed the terrible catastrophe that was Hurricane Katrina. Amaia and Aloysius know that The Composer will be going hunting, and they’re in a race against time to stop him claiming more victims. They have to head to New Orleans as the storm is gathering in strength and ferocity. Trouble also calls from Spain. Amaia’s aunt has news that brings Amaia’s childhood ghosts back to life and sends her down the darkest of paths. THE NORTH FACE OF THE HEART is richly layered, gripping thriller where the action moves across time and continents and holds the reader until the last page.

Redondo says that the origins of the book lie in the response of fans to the Baztán Trilogy. She of course already knew her character Amaia Salazar extremely well. But she received so many questions about Amaia’s past and about Dupree that she felt she had to provide a definitive answer.

“Somehow, this novel is a petition from the readers, and I gave it to them,” she says.

It’s also a very detailed answer. The novel has a number of plotlines and timelines, which Redondo weaves seamlessly together while keeping the reader eagerly turning the pages. All are resolved satisfactorily, with clever linkages between them. None of this happens by accident, as Redondo explains.

“Before I start writing a new novel, I embark in a long research journey,” she says. “I plan everything, I read a lot, I watch movies or documentaries, or I travel (when we used to travel easily!). It´s like a tree growing inside of me, and I only start writing when the idea is completed.”

And then she embarks on the painstaking process of bringing the idea to life.

“There is a wall in my studio at home that is empty when I start a new work,” she says. “It ends up filled with maps, photos, timelines, press clippings, and lots of colorful Post-Its with notes. I don’t remove anything until that novel is printed.”

Redondo’s process is one that is open to evolution and change as she progresses. “Writing means dealing with a ‘creature’ that is alive, and one has to be open: sometimes all of a sudden, I discover an unexpected treasure, like a little gold nugget in a river, and I have to add new details or change something or start a new investigation line.”

Her approach to research certainly pays off. The world building in the novel is superb. The depiction of the experiences of Salazar and other characters being caught up in New Orleans during Hurricane Katrina in 2005 is especially remarkable and vivid.

“I first did all my research online,” Redondo says. “I had followed the city’s rebuilding, the return of its citizens…until I finally spent a full long and intense week in New Orleans, following the steps of my characters and double-checking everything on location. I also had the chance to talk to several people who had survived the catastrophe. I visited The Presbytère Louisiana State Museum and listened to those recorded phone calls of desperate people calling for help, which was terrifying but really inspired my writing. I also wrote the novel for them, to remember their pain; it is my homage.”

THE NORTH FACE OF THE HEART is translated from the Spanish original. From a reader’s perspective, translator Michael Meigs has done a wonderful job, with the prose lyrical and rich.

“To have Michael Meigs as my translator into English is like a wonderful gift,” she says. “I feel honored and extremely lucky to have him. He was the recipient of the 2020 Lewis Galantière Award given by American Translators Association (ATA) for his translation of my previous novel All This I Will Give to You.”

Meigs shares the same approach as Redondo to immersive research. “He did so much for that book, even traveling to the remote Ribeira Sacra in Galicia (northwest Spain) to better ‘feel’ the landscape and the characters,” she says. “I love being in touch with the translators of my work when they need to resolve some doubts. I have 36 translators, into 36 different languages, which is a lot! But Michael Meigs is special: firstly, because for any writer, the English language is the gateway to a huge amount of possible readers across the planet, and also because he really understands my writing.

“During the translation of THE NORTH FACE OF THE HEART I was aware that he double-checked all of the data: he lives in Austin (where the ‘grand finale’ takes place), and he is also very familiar with the places described in the novel and was engaged personally. I don´t read English properly, so I can´t read the result of the translation, but everybody tells me it´s just brilliant.”

As for fans waiting for more of Redondo’s and Meigs’ brilliance, it is on the way, but Redondo is not revealing the details of what it will look like.

“I don’t talk about my next books… because I like surprising my readers,” she says. “I can only say that there will be more novels with Amaia Salazar and probably also some novels without her but featuring some characters that the readers already know and that I want to develop.”

Redondo is very clear about one thing, though: “My only wish is not to disappoint my readers!”

A wish which will surely be granted.