Taking Readers on an Adventure 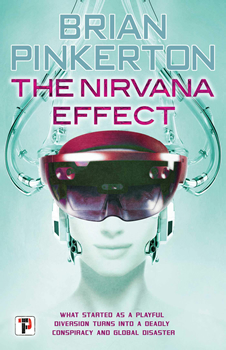 What if millions tuned into a virtual reality program while society collapsed around them? That intriguing question, and its chilling answers, will hold you riveted through THE NIRVANA EFFECT by Brian Pinkerton.

As the book opens, society is sheltered indoors. The economy is in ruins. Sound familiar?

Desperate for an escape from their troubled world, people spend their lives addicted to a breakthrough virtual reality technology called THE NIRVANA EFFECT. It started as a playful diversion, but a young couple uncovers a scheme to take over the technology and use it for mind control. It becomes a fight for free will, and the future of all mankind is on the line. THE NIRVANA EFFECT is truly the convergence of human biology and technology.

“It’s not as sci-fi as some people may think,” Pinkerton says. “We’ve seen technology implants in other parts of the body. Why not the brain? Elon Musk has started a company called Neuralink. Just this year, they experimented with placing a computer chip into the brain of a monkey. The goal is to help people who are paralyzed or have prosthetic limbs control movements through brain signals. But they’re also looking at emotional applications to manage things like depression and addiction. What happens when you cross these technological advancements with other aspects of our lives? Look at the next generation. Their games, their entertainment, their social interactions—it’s all conducted through technology.” 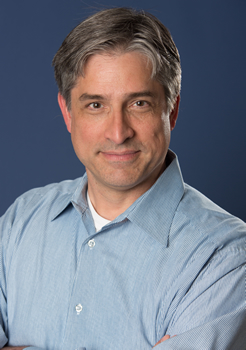 In other words, what happens when the iPhone in your hand becomes a chip in your head? Of course, good fiction is about people, not tech. In this case, Aaron, Clarissa, and Marc—the lead characters in the book—are everyday people struggling with changes in society that terrify them.

“Marc comes from a position of guilt,” Pinkerton says. “He worked at the corporation that developed The Nirvana Effect. Aaron and Clarissa are kindred souls who want to preserve the integrity of the real world as society becomes addicted to virtual pleasures and escapism. They don’t see themselves as heroes; they just want to stand up for what is right. As the story unfolds, they’re forced to take some very big, heroic actions to save the world. I’m always attracted to stories where ordinary people are thrust into extraordinary situations—and rise to the occasion. I want readers to identify with my main characters and go on a journey with them. I hope it creates a feeling of empowerment that anyone can be a hero.”

Part of what makes this story unique is that there’s not just one force at work to hijack the technology for nefarious purposes. The danger comes from many levels—from the lowest ranks of petty criminals to the highest tiers of government. 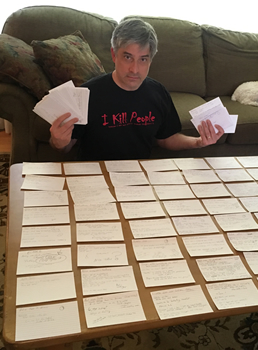 “I outline my novels on notecards,” Pinkerton says. “It helps me remember who gets killed.”

“There are seedy ‘bootleggers’ who sell illicit experiences in an underground network, indifferent to the dangerous side effects, like putting people into pleasure comas,” Pinkerton says. “You have Dynamica Corporation, the originator of the technology, which is purely looking at business success at the expense of what’s right for society. Then, during the course of the novel, you have two very different government administrations. Each one takes control of the technology for different—but equally dangerous—applications to influence society. The intentions may start out sincere but the execution quickly deteriorates into chaos.”

Of course there’s also the potential for global enemies to hack into the system. It seems unreal that Pinkerton wrote the bulk of the book in 2019. He handed the manuscript in on March 1, 2020. Three weeks later, COVID-19 shut everything down. Pinkerton describes it as a wild and harrowing coincidence. 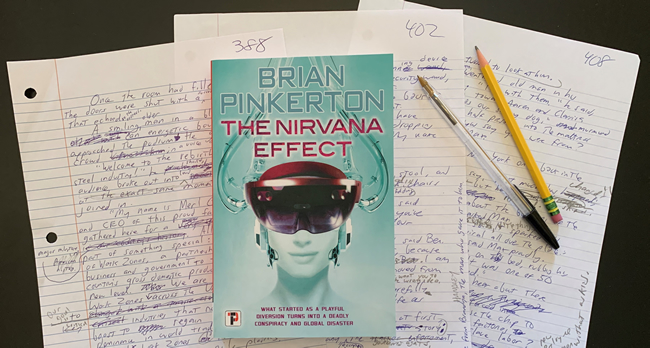 “Many people think the book was inspired by the pandemic,” Pinkerton says, “but it was written before. I definitely saw society headed in the direction of isolation and technology addiction, but not from the impact of a pandemic. The pandemic just accelerated it. In THE NIRVANA EFFECT, no one leaves their homes, and cities become ghost towns. Restaurants and retail shops shut down, movie theaters close, and there are fewer cars on the road. I guess I already saw this on the horizon. Part of it was observing my kids and their friends. Their lives evolve around personal electronic devices. The devices might as well be sewed into their heads. And maybe one day…”

In the reviews on Goodreads, many readers talk about how scary and “near-future” it is. Pinkerton says he was aiming for a big sci-fi adventure story, but many of the responses have been closer to horror. 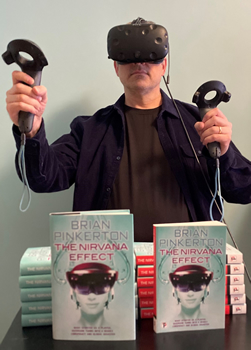 “Some of THE NIRVANA EFFECT is already here,” Pinkerton says. “People don’t leave their homes because everything they need is in ‘the cloud’ or delivered to them—a social life, entertainment, online food deliveries, Amazon Prime. You can stay indoors in your pajamas every day. Many companies have realized that the ‘work from home’ model works really well, and as we move past the pandemic, some of the changes in working and lifestyle will become permanent. The days of going into the office are coming to an end. Will movie theaters make a comeback? Everything is available to stream at home in high definition, and people are equipped with their own big screens and sound systems.”

Publishers Weekly labeled the book as a “thoughtful cyberpunk” novel, and it definitely has cyberpunk ingredients—a combination of high tech and deteriorating humanity. But the author says it’s more than that.

“I also believe it’s a dystopian novel,” Pinkerton says, “because it is very much centered on large-scale social disruption. Through the eyes of the main characters, we see civilization descend into chaos.” 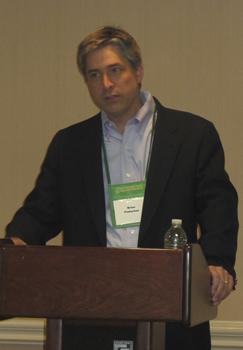 Pinkerton writes quite the variety of novels, and he fears he may have “shot himself in the foot” by genre hopping.

“My readers never know what I’m going to do next, and it’s possible that some of my mystery fans don’t follow me to horror, or the thriller fans don’t follow me into science fiction, but I really believe the core elements across my books are the same,” he says. “No matter what the genre, I like to take regular people and put them through an adventure. Any adventure. It could be a thriller, horror, or futuristic, but the main thrust is placing someone we can identify with on a roller-coaster ride and then experiencing the ups, downs, twists, and turns with them. That’s why my books don’t feature protagonists with super intelligence, super strength, or outlandish crime-fighting occupations. The stars in my book could be your next-door neighbors.”

Clearly, Pinkerton was thinking about where society was going before it ever got there. You can see his answer by jumping on his roller coaster called THE NIRVANA EFFECT.