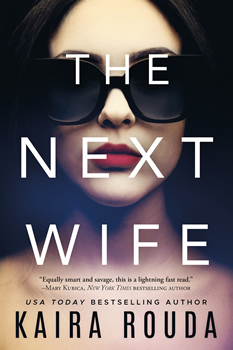 Tish Nelson has won both battle and war for her older but new husband John, a wealthy CEO who’s about to get even richer thanks to his company’s stock market flotation. Yet while she as victor may be getting all the spoils, John has yet to divest himself of some annoying baggage—namely his ex-wife Kate and daughter Ashlyn.

Tish needs to remind John of who he’s now married to and plans a romantic getaway to do just that. But we all know what happens with the best laid plans. And in the capable hands of USA Today-bestselling suspense author Kaira Rouda, things go horribly awry. THE NEXT WIFE is a satisfying, twisty thriller with a final turn of the screw that is sure to shock and satisfy readers.

The plot was in part inspired by the decade Rouda spent building an award-winning business with her husband. “We’ve all read the cautionary tales of couples who work together,” she says. “Build a brand together but lose their romance along the way. I took that very real possibility, and that’s where I started.”

That real-life backstory of the successful growth of a business from a basic start-up to a stock market flotation, and how long and challenging a path that can be, gives great credibility to the emotions and stakes in play in the novel. “I also grew up with a marketing professor father so I joke I earned a homeschooled MBA—and enjoyed many years in that field, culminating as the first vice president of an Inc. 100 firm and franchisor. When my husband asked me to help him build a brand for a new company, I jumped in, and that’s when Real Living began.”

Rouda has previously written a nonfiction titled Real You Incorporated: 8 Essentials for Women Entrepreneurs to share her experience with other women. “I wrote it to help women articulate their personal passions and gifts,” she explains, “and use those to build a genuine, unique brand for their business. Women entrepreneurs are the backbone of our economy. Women are natural community builders, and in business, that’s a gift. Collaboration and teamwork strengthen any enterprise.”

The publication of Real You Incorporated resulted in a national speaking tour. Rouda relates that she would stand in front of auditoriums filled with women entrepreneurs and tell them to put their passions into action and create the life of their dreams. It was then that she realized she should listen to herself. “I looked in the mirror and realized it was time to take my own advice. I’d wanted to be an author since third grade. Writing always was at the heart of my career. I was an English major in college and began my career as a journalist and freelance magazine writer.”

Although her move into marketing had been a highly successful one, Rouda still had the writing bug. “All along, I was writing, putting manuscripts in drawers, dreaming up ideas.” Those ideas are now novels that are reaching huge audiences of appreciative readers. “The advice I’d give to my debut novelist self is the same advice I give to anyone who asks: Don’t give up. Persistence is the key to many artistic careers. It’s not easy, but it is up to you to live the life of your dreams.”

Life of course has a habit of throwing curve balls, and the global pandemic is a sobering example of just how abruptly things can change. For Rouda, the first few months of the pandemic saw all four of her children moving back home. “The world seemed to be coming to an end; all I could do was garden. And I love to garden, but I also love to write. So at some point, when the new normal settled in, I started to write again. I actually finished three manuscripts during the pandemic, if you can believe it. Writing always has been my outlet, and it was during this dark time.”

Surprisingly for her, Rouda found that she couldn’t read. “That has been a big frustration. My concentration just wasn’t there. I’m so happy to say that period of time is over, and I’m enjoying novels again. Phew! I guess my advice to those who found their creative voice to be a little weaker during these tough times is to remember to be kind to your muse. She’s there. She’s just been through a lot. Show yourself the same kindness as you do others, and the muse will shine again.”

The entrepreneur in Rouda is also very aware of the impact of the pandemic on women in all sectors. “Unfortunately, women still bear more than their share of responsibilities for childcare. This pandemic has taken a terrible toll on working women, and the progress we’ve made to reach equal pay, among other things. The barriers remain the same through the decades: sexism and the good old boys network; equal pay for equal work; a country dedicated to access to childcare. But we are making progress, slowly. Women entrepreneurs are tough. They’ll be back stronger than ever as the pandemic ends.”

In the meantime, Rouda is enjoying having THE NEXT WIFE out in the world. “It’s been two years since The Favorite Daughter released, and although book launch events are still virtual, it’s so nice to have a book out.”

And her readers won’t have long to wait for their next suspenseful fix. “I’m very excited to say that my next novel, Somebody’s Home, releases in January 2022.”