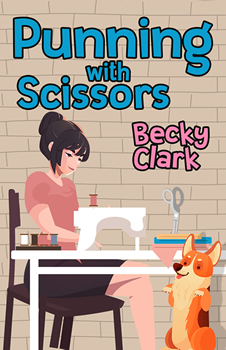 When the latest commission for an author interview for The Big Thrill dropped into my inbox, my eyes lit up at the inclusion of “crossword” in the synopsis for the book concerned, PUNNING WITH SCISSORS. I’m a huge fan of crosswords, the more cryptic the better.

So I started by asking the author—Becky Clark—what her favorite sort of puzzle is and what was the cleverest clue she’d come across? Mine is HIJKLMNO (5 letters—answer below.)

“You’re obviously much cleverer than I am, because you’re going to have to clue me in to that one. (See what I did there?) I keep track of some of my favorite clues also. My most recent list includes ‘Italian bread that’s no longer tender’ [LIRA], and ‘Stern with a bow’ [ISAAC],” she says. “I love when a puzzle can make me laugh out loud, whether it’s the theme or the clues.

“When I was looking for a hook for a new series, I thought it would be fun to incorporate crosswords. I had already toyed with the idea of creating puzzles, just because it seemed like fun, so writing crossword-related mysteries seemed logical and would allow me to do it during ‘work hours.’ Then I tried my hand at constructing them, to find I didn’t realize just how difficult it was to make that kind of magic! How hard could it be to make a puzzle if I was good at solving them, I thought with a Braggy McBraggy eye roll. Quite cavalier of me, I came to realize after much thunking of my head against the wall.”

Clark shares more insight into her latest release in this The Big Thrill interview:

Having puzzles located within a crime book is a noble tradition—how do the crosswords fit into PUNNING WITH SCISSORS?

The police chief in Chestnut Station, Colorado, would really rather be a mayor someplace with a lake where he could spend all his time fishing. So he does everything he can to keep the crime rate as low as possible so that when he decides to retire and run for mayor somewhere, he can point to his crime-rate credentials and get a plum position. When he’s not busy sweeping crimes under the rug, he’s an avid cruciverbalist (there’s a ten-dollar word for you!), so he always solves the crosswords that my heroine Quinn creates for the local paper. Only her parents and the editor know she does this, so she’s able to slip in clues to subliminally guide the chief to investigate the crime in the direction she thinks it should go. And, boy howdy, does she have opinions!

In the narrative of the story I’m able to explain some of the clues, so the reader will have a head start on the puzzle, if they want to solve it. But you don’t have to solve the crossword in order to figure out the mystery. It’s just a bonus. 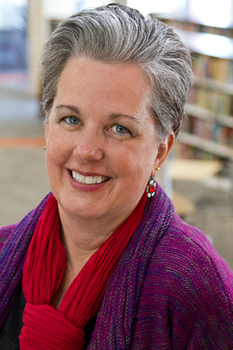 That reminds me of the story some of the code names from the D-day planning ended up in the Telegraph crossword. Quinn Carr’s an interesting character all round, having OCD. Did you always intend her to be this way, or did the condition grow in the telling?

When I started to think about fleshing out my sleuth, I wondered what kind of person is drawn toward creating puzzles. It occurred to me that someone with organizational OCD would really excel at crossword creation—all those straight lines and boxes, perfect rotational symmetry, black and white, only one answer. That’s how Quinn was born. In Puzzling Ink, the first book, Quinn had recently been diagnosed, which truly rocked her world. She’d had this OCD since she was a little girl, of course, but it had always served her well, all through school and college. But then she encountered a situation where it hurt her instead of helped. In PUNNING WITH SCISSORS, she’s still grappling with the ramifications of her diagnosis, but she is clawing her way up out of the darkness.

Quinn’s condition, though, isn’t the focus of the story: obviously the murders are. But I wanted to explore a character with a little bit of baggage, like the real people I know who have to adapt every day to some challenge, whether it’s diabetes, or being deaf in one ear, or having a life-threatening allergy. Quinn just happens to struggle with OCD, and it’s a new beast for her, so we’re learning about it together.

Then in contrast to Quinn, we have the epic Georgeanne. Have you ever had a culinary disaster on the scale of hers?

Disaster? I’m telling Georgeanne you said that! Every one of her, um, creative storms is completely edible, I’ll have you know. I know this because I’ve made most of them. Here’s a little inside scoop about Georgeanne’s recipes. From the get-go her character was cooking like this, but as a little joke for my editor, when I submitted the manuscript for the first book in the Crossword Series, Puzzling Ink, I included some silly recipes, like I would if I was writing a cupcake cozy or something. She thought it was so funny, she wanted me to do it for all the books. It was a little literary backfire directed my way. But it has been fun to dig a bit further into Georgeanne’s character like this.

When I was writing Banana Bamboozle, the first of the Dunne Diehl novels, I had to create the alcoholic drink—coincidentally called a Banana Bamboozle—that kind of gets the story ball rolling. That was a bit of fun, or “disaster,” for anyone peering through my window. I tell the entire story when people subscribe to my So Seldom It’s Shameful newsletter, but the short version includes the phrases empty stomach, home alone, and when I woke up, every surface of my kitchen was sticky.

I think it’s time to change the subject, so please tell us about the Dunne Diehl novels.

I started out writing for kids, with my first book published in 2001. Writing for kids and teens is complicated, and it became much more difficult for me as the years went on, so I transitioned to writing mysteries for adults, beginning with the Dunne Diehl Mysteries, which I wrote with a friend of mine from college, Ted Hardwick. There are two books in that series, Banana Bamboozle and Marshmallow Mayhem. The main characters there are Cassidy Dunne and Dan Diehl, two 50-something besties from college, one straight, one gay. In the first one, Cass is blotto on cocktails (those Banana Bamboozles) she’s been drinking at a backyard party, but she’s positive she saw her teenage niece there. The only problem is that her niece died as an infant. Dan tries to be the voice of reason, although Cass knows what she knows and will be undaunted. Marshmallow Mayhem involves an RV road trip from California to Colorado in the snow. All Cassidy wanted was some campfire s’mores, but instead, they stumbled upon the murdered campground owner at the place where they’ve parked. They become the prime suspects and can’t leave until they clear their names.

I also write the Mystery Writer’s Mysteries, which are all cozies featuring Charlemagne “Charlee” Russo who is a midlist mystery author herself. She only wants to write mysteries, but real-life ones keep falling on her head. In the first book, her agent is murdered in exactly the way she wrote in a manuscript very few people have read. In the second, she agrees to speak at a writer’s conference where the organizer’s daughter gets kidnapped. And in the third, she’s trying to salvage her reputation (and her coffers) by hosting an event with a bestselling author who has disappeared and left her holding the bag for all the expenses.

All of my books are fast, fun reads. There’s a lot of humor, but some situations might make you shed a tear or two as well.

That sounds like the kind of winning combination which helps to keep cozy mysteries so popular with our readers.

Award-winning author Becky Clark is the seventh of eight kids, which explains both her insatiable need for attention and her atrocious table manners. She likes to read funny books so it felt natural to write them too. She surrounds herself with quirky people and pets who end up as characters in her books. Readers say her books are “fast and thoroughly entertaining” with “witty humor and tight writing” and “humor laced with engaging characters” so you should “grab a cocktail and enjoy the ride.” Subscribe to her mailing list to apply to be part of her Review Crew and read her books before they’re published. She writes the Mystery Writer’s Mysteries and the Crossword Puzzle Mysteries, among other things.