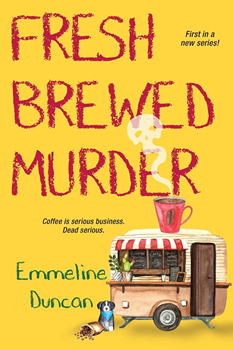 Not all authors write for both adults and teens—but Emmeline Duncan does.

Her latest for adult cozy mystery fans, FRESH BREWED MURDER, is the first in a planned series featuring Sage Caplin, a young entrepreneur with high hopes for her mobile coffee cart, Ground Rules.

But when one of her customers turns up dead—a slash across his throat—Sage must try to cut through the anger in the air to see who was mad enough to commit murder, especially when her own box cutter is discovered to be the murder weapon.

If Sage doesn’t find the killer fast, her business—and her life—may come to a grinding halt.

In this interview with The Big Thrill, author Emmeline Duncan shares insight into her new series, what it’s like writing for different markets, and the authors who have inspired her.

Do the story and text have to be different for the young adult and adult markets?

When I come up with a new idea, I generally know right away if it’s going to be YA or for adults. Mainly because the protagonist and how they approach the central problem or puzzle of the novel create their own slant. Basically, the way a teen views the world is different from how an adult does, although the components of what makes a satisfying novel stay consistent across categories. Nothing is off-limits in YA, but violence and challenging subjects are handled carefully in the teen market. YA experiences are frequently firsts, both good and bad. First time falling in love; first dramatic heartbreak; first time catching a murderer; all while figuring out the world around them.

After writing YA for a while, it’s nice to shift into writing from an adult POV since they have a different level of freedom from teens. They also have the weight of past decisions on them and more control in their own lives to make new mistakes. 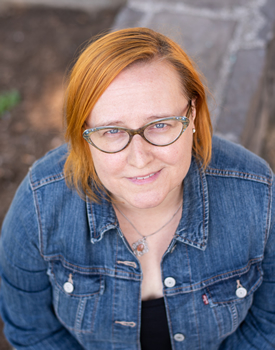 You say you admire Jane Casey’s writing, especially “her main character’s ability to be fantastic at her job as a detective while misreading obvious emotional cues in her personal life.” That could be said of many fictional detectives, professional or amateur. Why do you think this is?

I’m a huge Jane Casey fan. I adore her Maeve Kerrigan series so much, and I can highlight many reasons why (natural character evolution over books, fantastic plots, etc.). Brilliant fictional sleuths are usually fantastic at spotting minutia. The small detail that doesn’t fit frequently leads to the solution, whether it shows a sketchy path the investigator needs to follow or leads to a Sherlock Holmes-style deduction. But no one is perfect. It feels authentic to me to have someone who excels at parsing out why a crime happened, yet at the same time, whether it’s through mistrust of herself or the people around her, misses obvious clues about her own life. This is partially because it’s easier to have the emotional distance to see why a small detail matters when it’s not your own life.

Cozy mysteries seem to be awash with tea, coffee, cakes and the like. Is there some deep psychological significance to this?

Coffee, tea, baking, etc., are very comforting. Which makes all of them an interesting juxtaposition to death. They’re also something readers can relate to.

I decided to use a coffee cart as the setting of my novel as food cart pods are very Portland. Plus, they’re small communities in and of themselves, which serves a traditional mystery well since it creates a cast of characters with a reason to be near the action. It’s an added bonus that coffee carts are mobile, meaning it will be easy to change the setting of future books. Exploring the third wave coffee world felt fun, and hopefully, my novel has a fresh take.

The other thing cozies often feature is amateur sleuths finding themselves embroiled in solving murders that cut very close to home. It clearly appeals to readers. Would you care to comment?

This is a topic I love to discuss. I think in a lot of fun reads, like romances, spy thrillers, cozy mysteries, and more, there’s an element of wish fulfilment interwoven with a satisfying plot.

There’s frequently an element in cozies that show the protagonist taking a leap of faith and successfully turning a beloved hobby into a career (knitting, baking, bookshops, vintage clothing stores, etc.). It’s basically the same leap of faith we take as writers; look at the time we spend writing novels without any guarantee of success. For cozies, the puzzle of the mystery combines well with hobbies to create a book that readers will want to sink into and follow along with as the series grows.

Personal relationships are also vital in amateur sleuth novels since the protagonist won’t rely on DNA evidence, for example, to solve a crime. Instead, they unravel the why of the crime based on their knowledge of the community around them. I’ve always thought the personal connection is what appeals to cozy readers. Plus, it’s fair, and the reader should have the chance to solve the mystery along with the sleuth, even if they’re blinded by red herrings. And, at least to me, the “why” is always the most compelling element of a mystery.

The first line of FRESH BREWED MURDER—“I’m still waiting for the day I magically turn into an adult”—made me go, “Me, too!” Do you sometimes feel like a seven-year-old stuck in a grown-up’s body?

I usually joke I’m secretly a 12-year-old and a Labrador retriever in a trench coat. Based on the responses to that line, the sentiment is fairly universal, even by people who seem like they have it all together. Which fits why I wrote this line, as I wanted to show the contrast of Sage being a capable person who deals with realistic self-doubts.

Let’s call it an added bonus that, in addition to feeling young, once in a blue moon, people will think I’m younger than I am because I’m short. Like when I was cleaning out a massively flooded storm drain in the street outside my 95-year-old neighbor’s house, wearing jeans tucked into colorful rain boots and a bright green jacket with the hood up. A man walking by said something like, “Oh, it’s nice you’re doing this for your parents!” in the sort of voice adults use with kids when they’re acting unintentionally patronizing. If my eyes could’ve spoken, they would’ve said something salty. He started apologizing profusely when he realized I wasn’t a kid. Even if I had been 12, he still would have owed me an apology for being condescending.

Sage comes across as having a very strong view of what’s wrong and what’s right. Does that reflect her author?

Sage definitely has a strong sense of right and wrong. It’s always been a key component of her character, starting with the first rough idea that evolved into the current novel. And while Sage is very different from me, yes, we do share that same moral sense, and it’s grounded in our personal standards.

I have the feeling when I look back at the books I write, that one of the constants is a string of protagonists with a strong sense of right or wrong, even if it’s out of step with the people around them.

We’ve all been driven on to Zoom and the like this past year. I have to say I’ve really enjoyed doing online panels, not least because it means no long drives home on cold, wet nights. Which online events have you been doing?

While most of my virtual events started after March 30th, I’ve been on camera for a few virtual activities during the pandemic, mainly moderating talks. Thankfully nothing too disastrous has happened. Although I made one rookie mistake while interviewing Robert Dugoni for Friends of Mystery: I didn’t latch my office door. Partway through the interview, my Great Pyrenees (giant white dog) burst through the door. At first, he was chill and laid down next to me. But then he started pyr pawing me (aka whacking me with one of his front paws, which is the way his breed says they are desperately starved for attention). Thankfully the pyr paws were out of view of the camera, but it was distracting. And slightly painful. Pyr paws can leave bruises behind.

Emmeline Duncan is a mystery writer based out of Portland, Oregon. The first installment of her new Ground Rules series, FRESH BREWED MURDER, releases March 30th, 2021.

Emmeline also writes for teens as Kelly Garrett. Her debut YA novel, The Last To Die, was an Oregon Book Awards finalist and was re-issued by Sourcebooks Fire in November 2019. Kelly is also a 2020 Oregon Literary Fellow.

Emmeline/Kelly is a board member of the Northwest Chapter of the Mystery Writers of America and co-organizes Friends of Mystery’s Bloody Thursday lecture series. She’s also a member of Sisters-In-Crime, Willamette Writers, and SCBWI.