Not a Happily-Ever-After Thriller 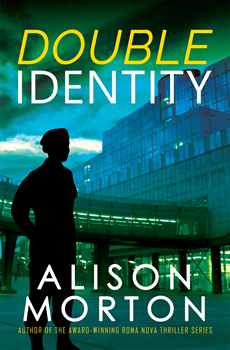 One could be forgiven for thinking that a happy-ever-after awaits Melisende des Pittones, ex-intelligence analyst with the French special forces in Alison Morton’s new espionage thriller, DOUBLE IDENTITY. When the novel opens, Mel has thrown in her job just three days previously to marry financial trader Gérard Rohlbert. She’s deeply in love, and a chic Parisian lifestyle beckons.

But this is a Morton thriller, which means hearts and flowers are not on the agenda. Mel’s dream turns to nightmare when she wakes up one morning to find Gérard murdered in bed beside her. Her horror deepens when Met Police detective Jeff McCracken accuses her of Gérard’s death. Mel must track down the real killer, even if that means being forced to work with the obnoxious McCracken.

As she delves into her fiancé’s past, Mel faces the shocking discovery of his secret life. To find the truth, she has to go undercover for the shadowy EIRS agency—and finds almost everybody around her is hiding a second self. Mel can trust nobody, and she’s in a race for her life to stop the killer before they come for her. It’s a slick and sophisticated action-packed read that grabs from the first page and doesn’t let go until the last. 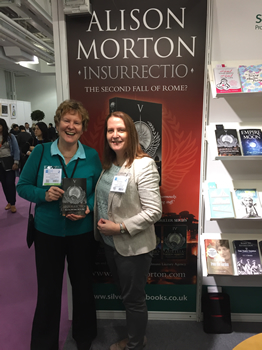 Morton celebrates the launch of her 2016 political thriller Insurrectio at London Book Fair with E. M. Powell, author of the Stanton & Barling mysteries (and this feature)

While Morton is well known for her successful alternate history Roma Nova series of thrillers, DOUBLE IDENTITY is her first contemporary release. It’s quite a shift and one that was partly inspired by bestselling historical fiction writer Conn Iggulden. “He was reading Insurrectio (Roma Nova #7) for me,” she says. “He gave me a lovely endorsement, but also commented on what he called my knack for fast-plotting tension. He said he kept coming back to see what happened next.” Iggulden also suggested that Morton recast one of her alternative Roma Novan heroines as an agent for a contemporary real-life European organization and run the story as a crime thriller. “Who could resist such a challenge?” she says.

DOUBLE IDENTITY was the result.

The switch to writing a contemporary novel was in many ways a liberation from writing in the historical genre. “With historical fiction, it’s the research, always the research,” she says. “Historical novelists take it for granted as they write every word.” She found she could write long stretches of DOUBLE IDENTITY without stopping, but then out of nowhere a hole in knowledge would open up in front of her which she had to check. Her training in historical fact-checking stood her in good stead. “The lessons and techniques of historical fiction meant I could get back into the story again quickly without losing the plot.”

In developing the character of Mel, Morton relied less on research and more on real-life experience. Morton did six years’ military service in the UK, working in a mixed unit where both men and women were weapons-trained and armed. That background shows in how well Mel is portrayed. 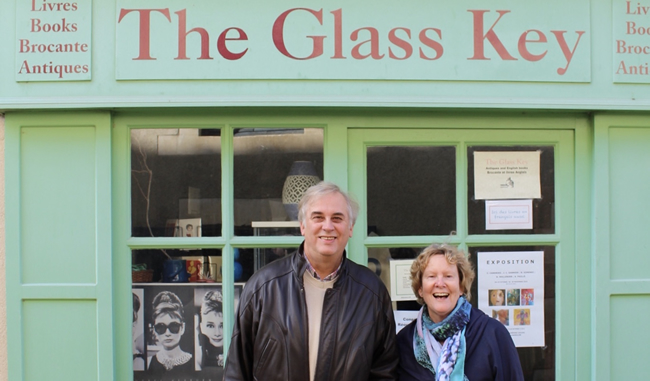 Morton with Keith Dixon, author of the Sam Dyke Investigations series, at the Glass Key bookshop in Montmorillon, France

“My time in uniform was some time ago,” says Morton. “But even though parts were hard personally and professionally—the North German plain is a very cold place in winter—the camaraderie and sense of joint purpose outweigh hardships. Yes, you train hard, you become exhausted; military life can be very demanding. But the social life is something to treasure. The biggest lesson? You learn to become self-reliant and at the same time a giver.”

Morton found so much that was familiar when researching the French Army. “It basically has the same mission and that sense of camaraderie, but the internal training and organization is different. An interesting factoid: their uniform was designed by [legendary fashion designer] Pierre Balmain!”

Spoilers preclude too many details, but going deep undercover is a key driver of the novel’s fast-paced plot. Morton gave much thought to the mindset of real-life espionage agents to lend credibility to the novel. 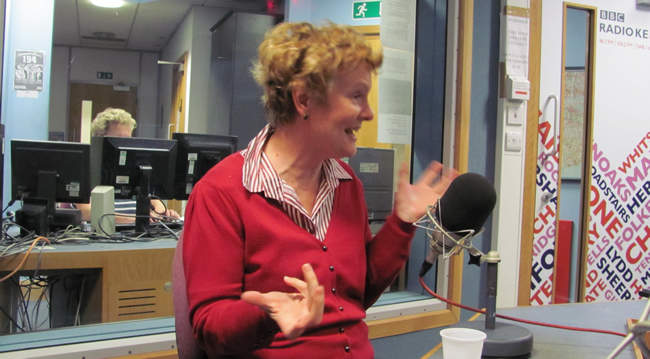 “The key is compartmentalizing,” she says. “In your real life you are Person A; undercover, you are Person B. Of course, keeping as close to the reality of Person A’s life in personal habits is a good idea as there is less room to make mistakes. However, that’s not always possible. The stress of such divergence comes out later, but one way of dealing with it is to always look forwards, never back. A sharp eye, enquiring mind, ability to make connections in the jigsaw of an investigation, good people skills, and the ability to persist are key qualities.”

Morton also brought a dose of reality to what espionage actually consists of. “Sometimes you go out in the field, but it’s not all running around all day like James Bond or Spooks. A lot of ‘spying’ is quite boring and mundane; surveillance, analyzing reports, gathering intelligence by hard slog, watching CCTV until your eyes bleed, preparing situation papers, and developing investigation strategies. Validating and testing intelligence from multiple sources often starts with time at the desk.” 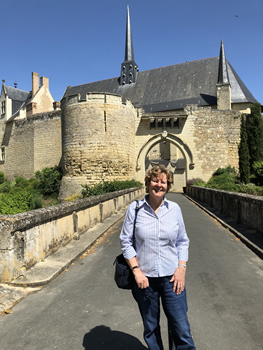 And time at the desk is also what produces intriguing novels. Morton’s been putting in the hours at hers, working on the next adventure for Mel des Pittones.

“Mel is pursuing a lead to Rome, modern Rome, that is, although there are dramatic scenes in the remains of Trajan’s Markets! She’s backfooted as there are so many loose ends to her investigation,” Morton says. “But pursuing them takes her on a dangerous journey into her own past and the beautiful, fierce, and unyielding Sahel region of Africa.”

Morton hasn’t abandoned her alternate historical thriller series either. “At the same time(!), I’m drafting a historical-fiction story, starting in 370 CE when the founders of Roma Nova meet. And believe me, sparks fly.”