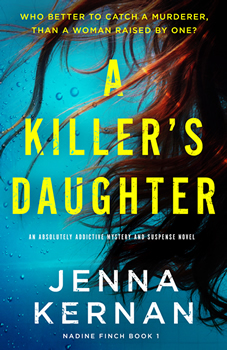 When two bodies are found floating in the shallows off the Florida coast, the hallmarks of the crime are terrifyingly familiar to FBI forensic psychologist Dr. Nadine Finch. The circle carved around the female victim’s wedding finger is identical to the wounds Nadine’s own mother inflicted on her victims. But her mother is on death row, where she can’t hurt anyone. Is this a disturbing coincidence or a twisted copycat?

This is the premise of Jenna Kernan’s latest novel, A KILLER’S DAUGHTER, the first in a series featuring Dr. Nadine Finch, an FBI forensic psychologist. As Nadine works to solve the mystery, she is hounded by the fear of once again having everyone know she is the daughter of a serial killer. Added pressure comes from knowing there will be more murders unless she can act in time to prevent them.

So how does an author decided to write about a serial killer? For Kernan, the groundwork was laid in 2018. At a workshop by Lawrence Block, he said of a serial killer, “Once you meet him, you can’t unmeet him.” This was followed by M. William Phelps’ caution in his book Dangerous Ground, ‘there will be a psychological …price to pay.’ These warnings served as a springboard for Kernan, who wondered, “What would happen if you couldn’t avoid a relationship with a serial killer because that person raised you? That idea sent a chill down my spine.”

With the decision to write a thriller made, she searched for a protagonist and started thinking of expanding the idea of who is victimized by the killer’s crime. “It occurred to me that someone experiencing emotional trauma might seek psychology to understand themselves better and combine the field with law enforcement,” she says. “I attended every workshop I could find given by forensic and criminal psychologists as my protagonist took shape. 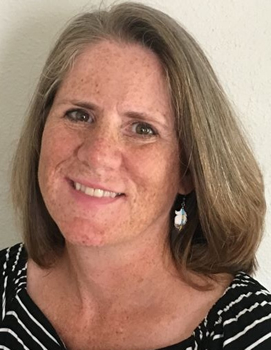 “Then I read the most current research on the FBI website from the National Center for the Analysis of Violent Crime and learned that ‘Due to the lack of submitted cases…this study did not include female offenders.’ This inexplicably infuriated me, and in that instant my male protagonist and his father changed to a female profiler and her serial killer mother. Researching female killers, I have to disagree with the FBI. There are more than you would think.”

A KILLER’S DAUGHTER is hard to categorize. Kernan thought she was writing a psychological thriller. She was surprised her agent pitched it as a police procedural, and her editor called it a crime mystery-suspense. Regardless, the novel works on a number of levels, thanks to Kernan’s skill honed over her career of more than 30 novels. Some of these layers were intended while others were discovered during the writing process.

When asked about what she knew about A KILLER’S DAUGHTER before she began writing, Kernan said, “I had the first three stories all plotted before I started the first draft of A KILLER’S DAUGHTER, and wrote from a synopsis. Before beginning, I did much research and development for each of the main characters. The second in the FBI Agent Nadine Finch series was written after creating a one-page synopsis and a 20-page outline. My outline included all the plot points, themes, subplots, and murders.

“I purposefully gave Nadine a rich backstory and many unanswered questions, a guarded personality, and a deep pool of personal guilt…The plots changed with editing, but the overarching story of Nadine’s hunt for her father was always my intention. She is desperate to learn where he is and why he didn’t come back for her.”

Writing A KILLER’S DAUGHTER had its challenges. “Nadine Finch was the most challenging for two important reasons, the first that I know next to nothing about what a forensic psychologist does for a living, and the second because I was so caught up in keeping her family secrets that she became too self-absorbed and unsympathetic, focusing on her own troubles instead of the victims. It was a struggle to reveal her character and still keep her likeable, even more so because in my initial vision she was a darker person.”

On the other hand, the most fun for Kernan was just writing. “I always enjoy creating that mud pie of writing that is the first draft. It’s a big, sloppy, ugly mess but so satisfying to get in there and get your hands dirty. The result is always something for which you are extremely proud but that no one but your mother would want to read.

“I try to write the draft as fast as possible and rarely look back at what I’ve written until the imperfect, overly-long first draft is complete. Once my draft is finished, I start editing, beginning with a read-through. I work in sections and often reorder them. After I have the structure in place, I do a second read-through and correct smaller issues. After my editor gets ahold of my work, it boomerangs back with structural edits, and I begin tearing apart and moving things again, along with cutting sections and writing new ones. It’s a lot of work, but I’ve never ended up with a story that isn’t improved as the result of my editors’ suggestions.

“As an example, my first draft of A KILLER’S DAUGHTER was written in the first person. Switching a 400-page story from first to third person is a writing exercise I would avoid and wish that I had.

“The important thing is to give yourself the freedom to write imperfectly all the way through and realize that notions of perfectionism will kill any project before you finish. The truth is no story is ever what the author hoped it would be. Write it anyway.”

Publishers Weekly and Amazon bestselling author Jenna Kernan has published over 35 books of Romantic Suspense, Paranormal Romance, and Western Historical Romance and will launch a new thriller series in 2021 featuring a criminal psychologist facing a series of murders on Florida’s Gulf Coast.