A Resolute Testimonial of Inner Strength 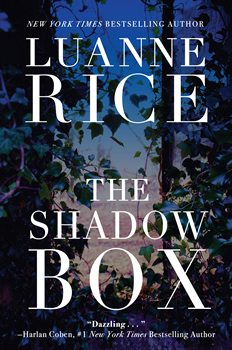 When author Luanne Rice is asked how she plotted her latest title, THE SHADOW BOX, her answer might surprise most of her readers. “I don’t plot my novels—I wouldn’t know how!” Rice says. “I start with a character and go from there.”

It seems unimaginable that Rice’s process is such an organic one after reading her latest release, with its thrilling pace and intricately woven narrative threads. In the opening pages we meet artist Claire Beaudry Chase, attacked, left for dead, and clinging to life in her own home.

However, this scene is only the beginning of the nightmare. The reader is flung between timelines and characters to portray the high-society world where nobody can be trusted, least of all Claire’s well-connected husband, Griffin. With nowhere else to turn, Claire must decide how much she’s willing to lose to take down her husband and the corrupt group of elites who will do anything to protect Griffin’s interests and their own.

Claire Beaudry Chase was the character that started Rice writing THE SHADOW BOX. “[She] came to me very strongly, and she led the way. Each morning when I sat down to write, I entered her reality and thought about her strengths and fears, her history, her wishes for the future, and her life as an artist.”

Yet the path that leads Claire on this race against time for her own survival, as so many survivors of domestic abuse can attest to, was not a planned one. The psychological thriller is peppered with chilling flashbacks that show the walls, almost imperceptibly slowly but surely, closing in.

It’s a feeling of powerlessness that’s unfortunately personal for Rice, best put by the title of her essay detailing her own relationship with an abusive partner: “It Couldn’t Happen to Me.” “I have written about domestic violence and emotional abuse before, and although I didn’t plan to write about them again here, the direction of the story made it necessary. I’ll probably never really get over the fact that it did happen to me. That was many years ago and the good thing is, I got help, and through that am able to understand and help others.

“Claire is married to a man who is widely liked and respected. He has created an image for himself, and she is part of it—he wants everyone to think they have the perfect marriage. He is smooth and charming; he doesn’t have to use physical violence to exert power and control, but meanwhile he’s breaking her down. It’s a hallmark of abusers.”

The release for Rice’s protagonist is in her titular shadow boxes—clear display cases of ocean debris which act as silent yet unflinching statements on the horrors which lurk beneath the town’s perfect seaside façade. THE SHADOW BOX, like many of the author’s previous titles, is inseparable from these beautifully visceral echoes of the ocean and coastal life.

It was on the coast that Rice both wrote and placed her characters. “I was locked down in this house above the beach. My grandparents built it, and I have spent at least part of every year of my life here.

“It’s a salty little place, full of memories both light and dark. There are always a few ghosts coming in and out. Sometimes I serve them tea. Just outside my kitchen door is an herb garden that has an incredibly old, gnarled sage that was planted by my grandmother, some rosemary and lavender plants, and a bed of thyme from my mother.

“I really missed people this summer, especially before we got better at visiting outside, with ten-or-so feet between us. I’ve never minded writing about places from memory, through imagination, but in this case I was looking out my window at the imagined spot THE SHADOW BOX is set.”

Yet Rice was unafraid to bring a place filled with nostalgia to dark and twisted depths on the page. “The sea is so inspiring to me, whether calm or stormy. I live in a cottage overlooking Long Island Sound, and some of my favorite times here are when the waves are crashing and the wind is howling.

“My distant view is of a wild peninsula, acres of protected land—woods, granite ledge, and beach.  I’ve loved it my whole life, and it’s the site of some of the most troubling incidents in THE SHADOW BOX. So I guess my loving a place doesn’t protect it from my imagining terrible things happening there!”

THE SHADOW BOX is a heart-stopping yet enthralling breath of sea air, with as much dark beauty as one of Claire Beaudry Chase’s own shadow boxes. It’s also a resolute testimonial of inner strength, no matter how far from our plots and plans life takes us.

Rice would like to remind readers that if the storyline of domestic violence or verbal or emotional abuse resonates, please reach out for help. You can call the National Domestic Violence Hotline 800-799-SAFE (7233) or many local agencies. In her part of Connecticut, Safe Futures is there for people who need it: 860-701-6001.