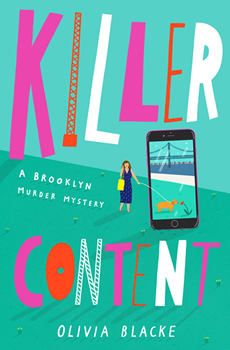 Sometimes you read an author’s website and you go, “Well, what on earth’s that about?” That was certainly the case with Olivia Blacke, so when we sat down to talk about her debut thriller—KILLER CONTENT—we started first with a question about cookies.

I was developing a story where the main character is a baker, but I wanted something outside of the usual fare, and I landed on dog cookies. Of course, I had to experiment on cooking dog treats in real life before I could write about it, and now I make my own dog cookies in a variety of shapes—armadillos, cacti, dolphins, seahorses—but none shaped like dogs. That’s mostly because I own a bunch of cookie cutters in Southwest and ocean shapes that I think are funny. My go-to recipes are Bark-B-Que and Pumpkin Butter (you can find the recipes on my blog).

I’m owned by a little rescue puggle that would love to eat all the cookies all the time, but she’s already too roly-poly for her own good (according to the meanie vet), so every time I bake a batch, I give some away to friends and neighbors, too, which means every dog in the neighborhood loves me.

Now that that’s cleared up, tell us about your Groot obsession. I mean, it’s not a bad thing…

I’m a proud nerd. I love comic conventions and space operas and all that fun, geeky stuff. I was having a particularly rough time when I first saw Guardians of the Galaxy and when that character said, “We are Groot,” it hit me right in the feels. I need that reminder every once in a while, so I surround myself with Groot. I even had a Groot tattoo scheduled until the pandemic came along, but I hope to reschedule that one someday soon.

Your novel, KILLER CONTENT, is set in Williamsburg, New York. Can you tell this Brit what makes the place so special?

Cozy mysteries are typically set in quiet, quaint villages. When you think of New York City, words like quiet and quaint don’t exactly spring to mind. But here’s the thing about NYC—each and every borough and neighborhood has its own unique flavor. Williamsburg, a trendy neighborhood in Brooklyn, is this vibrant, thriving community filled with art and music and amazing food. It’s been transformed from disused warehouses into an affluent neighborhood over the course of two decades and has managed to retain its hipster vibe even as it matures.

That sounds remarkably like the regeneration that’s happened along the old dockland areas of London. Change very much for the better. KILLER CONTENT is your debut novel: what was the most surprising thing about having your first book published? What did you wish you’d known before you got into this?

KILLER CONTENT—a character-driven cozy mystery with a social media hook—is my debut novel. As clichéd as it may seem, I honestly think the most surprising thing about publishing is still yet to come to me. This has already been a fabulous and often absurd journey. I still haven’t held my debut novel and my second book in the series is practically out of my hands already.

Wait, did I say second book? Yes, I did! I can now reveal that Book #2 in the Brooklyn Murder Mysteries series is No Memes of Escape, where Odessa solves a murder in a sealed escape room.

With that in mind, if you had to give one piece of advice to aspiring novelists about writing their first series, what would it be?

If you’re starting a series, think long and hard about names and locations. I set my series primarily in Untapped Books & Café …. but I can never find the “é” when I need it. Also, keep a running list (I use Excel) of characters—it’s much easier to refer back to a character sheet than flip through multiple novels trying to remember if that minor character you created in Book 2 that turns out to have a major role in Book 4 has blond or brown hair.

Many books have quotes at the start of chapters, but you have tweets. Why did you choose that device, and are you a fan of social media or do you think it a necessary evil?

I probably spend too much time on social media if I’m being honest, especially Twitter. So many modern books gloss over the existence of the internet and cell phones, but in the Brooklyn Murder Mystery series, technology and social media is always integral to the plot in some way. In KILLER CONTENT, the murder was caught in the background of a flash-mob proposal that went viral and the victim was a rising YouTube star. The tweets that anchor each chapter give a glimpse into the characters in their own voice, and Odessa even has her own Twitter account IRL: @OdessaWaiting.

Thinking of what happens to the heroine on the first page, have you ever had one of those “life flashes before your eyes” moments? I confess I’ve had one, rolling down a hill while helping on a school trip (don’t ask).

I’ve had a few big uh-oh moments—a nasty car wreck, a dog bite, a long fall off one of those inflatable obstacle courses—where time seemed to slow way down and I felt like I was watching everything happen from outside of myself, unable to affect anything. But the only time I’ve experienced the “life flashes before my eyes” moment was my own fault. I thought those parasailing boats at the beach looked so fun, but the second my feet left the platform, I knew I’d made a huge mistake. I had a lot of time to relive the highs and lows of my life while I hung suspended by a parachute, listening to the wind and the creaky ropes as the boat retreated farther and farther away, and like Odessa, I realized that my life was pretty boring.

Since then, I’ve made an effort to be more adventurous—but nothing parachute related!

Your description of avocado toast sounds like one of my standard lunches when out (when we were still allowed out…). How important is food and drink to you and your characters? Do you think eating scenes are at risk of becoming a cliché in cozy mysteries?

Much of KILLER CONTENT takes place in a bookstore-cum-café, and I try to capture some of the unique flavors of Williamsburg through descriptions of dishes and craft beers served in the café. I intentionally included avocado toast because that’s a simple, delicious meal that for some reason seems to divide millennials from other generations, and one of my recurring themes is the not-always-subtle generation gap. However, one thing we all have in common is that we all need to eat and right now, especially, the idea of walking into a café and having multiple mouth-watering choices is particularly appealing.

Brooklyn Murder Mysteries author Olivia Blacke writes quirky, unconventional, character-driven cozy mysteries. After shuffling around the USA from Hawaii to Maine, she currently resides with her husband and their roly-poly rescue puggle, but is forever homesick for NYC. In addition to writing, disappearing into a good book, and spending way too much time on social media, she enjoys scuba diving, crocheting, collecting tattoos, and baking dog cookies.