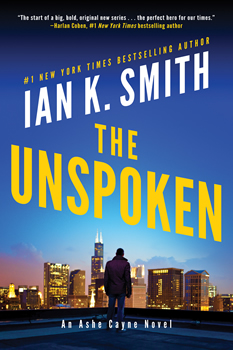 Are you ready for a thriller with a big, entertaining cast, a smooth sleuth, and a story that seems ripped from the headlines? If so, latch onto THE UNSPOKEN by Ian K. Smith.

THE UNSPOKEN is the first of a new crime series starring Chicago private eye Ashe Cayne. Originally a policeman, Cayne is pushed off the force after standing up to his superiors against a cover-up relating to the death of a young Black man. Unlike the grim, angry protagonist you might expect in this situation, Cayne is a likable guy, the kind of fellow you’d be happy to meet at a party.

“He’s smart, handsome, tough, sarcastic, but still not full of himself,” Smith says. “He can as easily talk about golf as he can Shakespeare and Chaucer. He is a wonderfully imperfect hero. He is constantly in the righteous pursuit of justice, but he has his own flaws and imperfections that make him a real person with real emotions. Despite his outward bravado and his accolade-worthy accomplishments, Ashe doesn’t see himself as a hero in the sense of a celebrity.” 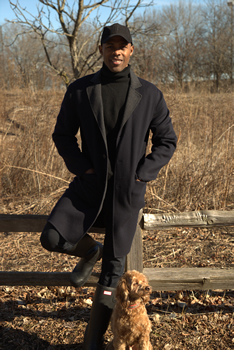 However, the reader gets the sense that Cayne does see himself as a champion for people who have been damaged, unfairly treated, and deserve justice. Determined to persevere on his own terms, Cayne turns to a career in private investigation when his police career is crushed. And when a young woman goes missing, her wealthy parents hire him to find her. As Cayne investigates her life and past, he discovers an intricate web of secrets that the family has been hiding. Then the girl’s boyfriend is found dead. Cayne believes that finding the missing girl is the key to finding the boy’s murderer.

While the Kirkus review says that the book “recalls vintage Chandler or Hammett,” Smith will tell you that his inspirations are more contemporary: Walter Mosley, Harlan Coben, Michael Connelly, and Henning Mankell. And those influences show. What really distinguishes THE UNSPOKEN from other detective novels is that it features such a complicated lead character.

“He’s smart, tough, and determined,” Smith says, “but he’s also scarred by a tumultuous relationship with his imperious father and damaged from a failed marital engagement.”

There’s also another side of Cayne. Without dropping any spoilers, I’ll just say that he has been known to seek justice in the night against bad people who he believes have not gotten what they truly deserve by the courts and legal system.

This is very much a character-driven novel, and there is one more important character to discuss: the city of Chicago itself, which seems to shape the plot and the characters and their arcs. 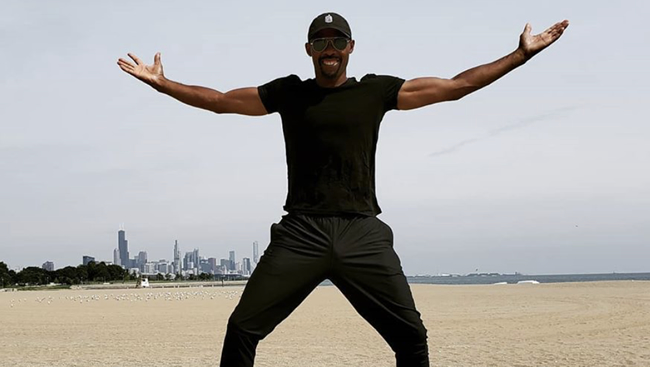 Smith in front of the Chicago skyline.

“Chicago is not as well known as the bigger cities of Los Angeles and New York,” Smith says, “but it is as diverse and urban and complete with great sports teams, Michelin-starred restaurants, and world-class political corruption. Chicago can be as gritty as it is beautiful, as cosmopolitan as it is rural. I want readers to feel like they are actually in Chicago while reading the book, which is why I portray it realistically with the many textured layers that make it one of America’s greatest cities.”

You may have missed it, but this Ian K. Smith is the same author who wrote the nonfiction bestsellers Shred and Clean & Lean, among others. He actually started writing fiction long before his nonfiction career began—he just never published any of the work. 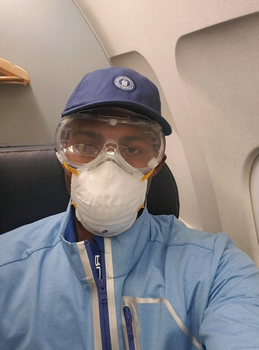 Smith takes every possible precaution to stay safe—and keep others safe—during his first flight since the onset of the pandemic.

“I wrote stories and proverbially put them on the shelf,” Smith says. “The Ancient Nine, my previous novel, I actually wrote the first draft as a junior in college. I love fiction. I love the creativity it allows. I love the ability to let your imagination run free and create people, situations, and moments that I have not experienced, but have heard about or simply just wondered about. I’m a naturally curious person, and fiction allows me to satisfy that curiosity. I have always been a lover of thrillers and mysteries. I had gotten so much pleasure from reading them that I decided years ago that I wanted to write my stories in that genre and hopefully provide a similar thrill to other readers.”

Smith doesn’t plan to give up on either of his writing passions. He will continue publishing two books a year, a nonfiction health-related book in the spring, and fiction in the fall. For him, the two writing processes have both similarities and dissimilarities. The biggest difference involves what he calls the constriction of the imagination.

“Yes, there’s an element of creativity in nonfiction,” Smith says, “but it tends to be very linear and predominantly based on findings that tend to be the discovery of others and not yours. If you write about the science of happiness, for example, you will find tons of research articles and papers from which you draw information and conclusions to expound upon in your book. When you write fiction, you have and own a blank canvas, and you can write whatever you want and go wherever you want.” 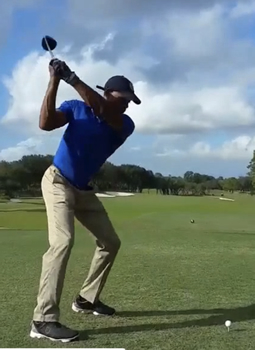 Smith is an avid golfer.

That canvas can stretch.

Smith says he knew right away that Ashe Cayne was going to be a series, because the character he wanted to develop and the cases he would take on deserved a life longer than one book.

“He will have plenty of adventures in the future that will take readers through the streets and stadiums and mansions and tenements in all sides of the city,” Smith says. “Ashe is a hero for our time, complicated in some aspects, simple in others. Ashe is a man who is determined to seek justice at all costs and is fearless in his pursuit without taking himself too seriously.”

Smith has already written the next installment and assures me that Cayne rises to the occasion once again. So, if you want to get in on the ground floor of the adventure, grab your copy of THE UNSPOKEN and get to know Ashe Cayne.